Who didn’t see this coming? The idea that a vaccine could harm you is now mainstream news, grabbing headlines across America and throughout the world.

The general public has not been prepared for what is happening. Safe and effective…A sore arm for one in a million. Thanks to the media and complicit health officials, most of the public knows only an insultingly basic, one-sided narrative that has been viciously protected for years.

Previously, warnings about vaccine harms from parents of vaccine-injured children, scientists and the frontline healthcare heroes were purposely neutralized. But that has all changed in history’s instant—a tipping point whose time has come. Let’s hope, anyway, because corporate media is scrambling to shore up the narrative.

Both Pfizer and Moderna’s experimental shots have now been unleashed on the public. Without clear evidence of safety and efficacy, the U.S. Food and Drug Administration (FDA) has given them both an emergency use authorization status (EUA). A simple expanded access program would have sufficed to gather more data before such a caviler public safety experiment.

Healthcare workers and those in longterm care facilities are now reduced to data points in Pfizer and Moderna’s Phase 4 experimental vaccine safety trials—Coming to a town near you!

-Effectiveness in certain populations at high-risk of severe COVID-19

-Vaccine effectiveness against transmission of SARS-CoV-2

-Any longterm adverse reactions or harms

Seeing through the BS, FOX News’ Tucker Carlson dissected the nauseating PR push to promote Pfizer and Moderna’s experimental shot calling it “patronizing” to Americans. “It feels false, because it is…it’s too slick” explained Carlson.

It appeared the vaccine safety discussion had gone mainstream and it was off to a rocky start for Big Pharma. For months, healthcare workers had signaled their distaste in being the first participants of the experimental vaccines. Their concerns fell on deaf ears. The rollout began.

Starting in the UK, where Pfizer’s experimental shot began a week before Americas, two NHS workers suffered allergic reactions forcing UK regulators to haphazardly rewrite their guidelines warning “Any person with a history of a significant allergic reaction to a vaccine, medicine or food…not receive the Pfizer BioNtech vaccine.”

In the U.S., the same pattern played out. In Alaska last week, headlines reported a healthcare worker was hospitalized after Pfizer’s experimental shot. Day by day, the headlines grew…two, then three, then five Alaskan healthcare workers suffered allergic reactions. Some required extended hospital stays for observation.

Advocate Condell Medical Center in Libertyville, Illinois halted its experimental vaccine program after four employees experienced reactions shortly after receiving the vaccine. Meanwhile, just as live-steaming Pfizer’s shot started to become all the rage, a CHI Memorial nurse fainted with cameras rolling “about 17 minutes after” she and other front-line healthcare workers at her location received their COVID-19 vaccines.

Like UK regulators a week earlier, the CDC had to issue guidance warning not to get the vaccine if you have ever had a severe allergic reaction to any ingredient in the experimental shot. Wasn’t this already conventional wisdom screened for in healthcare settings before being vaccinated? Who is managing this thing?

Public trust began breaking bad fast. The headlines were becoming untenable for health officials to deflect or explain away. An FDA frontman came forward and said during a media call Friday that the allergic reactions had been reported in more than one state, including Alaska.

Then, a bombshell: An American committee running a COVID-19 vaccine working group dropped a shocking admission that no corporate media outlet would touch with a ten foot pole:

In only four days of record-keeping since Pfizer’s experimental shot, 5,052 “Health Impact Events” occurred. Such “events” are defined as “unable to perform normal daily activities, unable to work, required care from doctor or health care professional.” 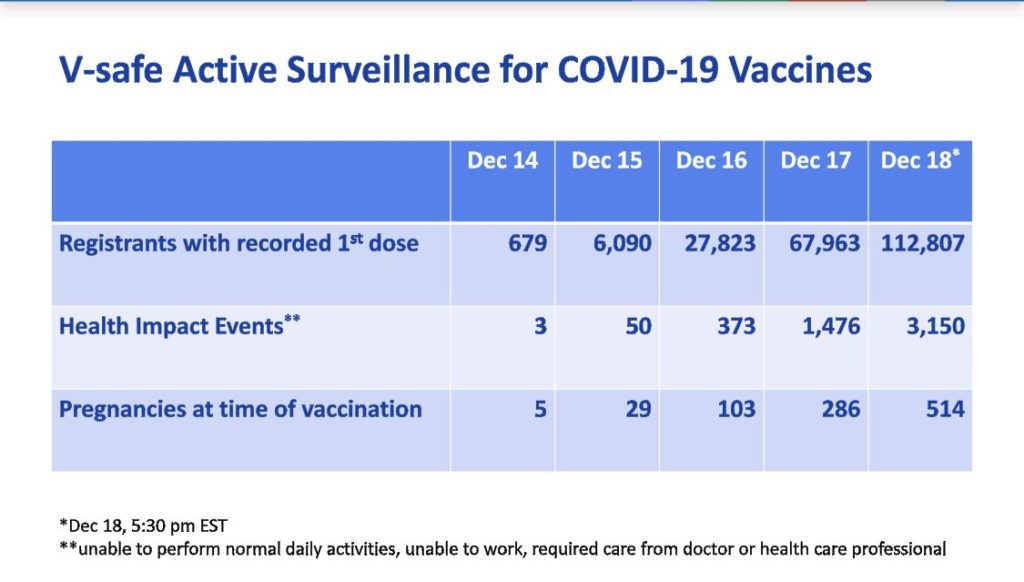 Are we to believe that only six of the 5,052 adverse reactions sidelining experimental vaccine recipients are simple allergic reaction? What are the conditions of the other 5,046 people who reported “events”? During its trials, Pfizer’s vaccine saw four cases of Bell’s Palsy facial paralysis—did any of the 5,046 report that event as well? Are all of those events just mild allergic reactions of little to no importance as the media and health officials would have us believe?

The public was promised transparency. What we’ve received so far has been PR talking points, slick marketing, and officials omitting facts in the name of gatekeeping trust in public health. None of these practices promotes trust for an educated public looking for the truth and real answers. Who is watching the watchers?