World Council for Health: Urgent Call to Oppose W.H.O. ‘Global Pandemic Agreement’ Which Threatens the Sovereignty of All Humanity #StopTheTreaty

World Council for Health: Urgent Call to Oppose W.H.O. ‘Global Pandemic Agreement’ Which Threatens the Sovereignty of All Humanity #StopTheTreaty

As the World Council for Health (WCH), our partners and allies have already sought to draw attention to, the World Health Organization (WHO) has proposed a global pandemic agreement that will give it undemocratic rights over sovereign people. See the WCH Open Letter in response to this attempted power grab here.

WHO has quietly opened the floor for comments on the agreement but has provided little time to do so ahead of the first round of hearings scheduled for April 12 and 13.

We encourage everyone to share their thoughts with World Health Organization before the deadline.

1. Go to the World Health Organization website to submit a written submission now

The prompt provided by the WHO does not ask the people of the world whether or not they believe a global agreement is necessary. Instead, the organization has decided for itself that this measure is warranted and is asking for input on what people believe should be included in it.
Go to the World Health Organization website

How to Write Your Submission

Why do I need to frame my submission using WHO’s provided context?

Because the WHO reserves the right to judge the relevancy of submissions, it is important to respond to the prompt in an appropriate yet constructive manner. As such, the World Council for Health suggests the following elements be addressed:

The hearing will be livestreamed here on Tuesday, April 12.

2. Relay your action on Social Media

Make Some Noise on Social to #StopTheTreaty

Public health is not a one-size-fits-all program. We need people and communities in control of their health. Submit a comment today to #StopTheTreaty

Screenshot your submission on the WHO page (just before you submit it) and Tweet it to let others know how it’s done.

Also share on Minds, Gettr, and everywhere else you think it’s important.

Use the hashtag #StopTheTreaty so we can unify our voices, and @WCH_org and @WHO on Twitter.

Connect with World Council for Health 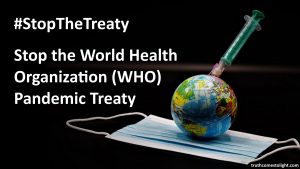 cover image based on creative commons work of Caniceus