A moving collaboration between fathers, mothers and god parents.

Filmed to coincide with the Cheltenham Literature Festival 2015, this film was planned and shot over the last weekend of September 2015.

The film was created with no-budget and everyone generously volunteered their time.

A collaboration between two Gloucester based creative groups: Artists Collaborate and Food for Thoughts.

If you can keep your head when all about you
Are losing theirs and blaming it on you;
If you can trust yourself when all men doubt you,
But make allowance for their doubting too:
If you can wait and not be tired by waiting,
Or, being lied about, don’t deal in lies,
Or being hated don’t give way to hating,
And yet don’t look too good, nor talk too wise;

If you can dream — and not make dreams your master;
If you can think — and not make thoughts your aim,
If you can meet with Triumph and Disaster
And treat those two impostors just the same:.
If you can bear to hear the truth you’ve spoken
Twisted by knaves to make a trap for fools,
Or watch the things you gave your life to, broken,
And stoop and build’em up with worn-out tools;

If you can make one heap of all your winnings
And risk it on one turn of pitch-and-toss,
And lose, and start again at your beginnings,
And never breathe a word about your loss:
If you can force your heart and nerve and sinew
To serve your turn long after they are gone,
And so hold on when there is nothing in you
Except the Will which says to them: ‘Hold on! ‘

If you can talk with crowds and keep your virtue,
Or walk with Kings — nor lose the common touch,
If neither foes nor loving friends can hurt you,
If all men count with you, but none too much:
If you can fill the unforgiving minute
With sixty seconds’ worth of distance run,
Yours is the Earth and everything that’s in it,
And- -which is more — you’ll be a Man, my son! 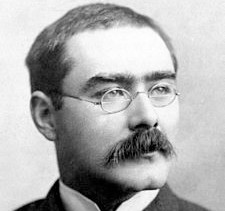 Joseph Rudyard Kipling (30 December 1865 – 18 January 1936) was an English journalist, short-story writer, poet, and novelist. He was born in India, which inspired much of his work.