483 More Deaths After COVID Vaccines Reported to VAERS, as Pfizer and Moderna Push for More Boosters

483 More Deaths After COVID Vaccines Reported to VAERS, as Pfizer and Moderna Push for More Boosters

VAERS data released Friday by the Centers for Disease Control and Prevention included a total of 1,183,495 reports of adverse events from all age groups following COVID vaccines, including 25,641 deaths and 208,209 serious injuries between Dec. 14, 2020, and March 11, 2022.

The Centers for Disease Control and Prevention (CDC) today released new data showing a total of 1,183,495 reports of adverse events following COVID-19 vaccines were submitted between Dec. 14, 2020, and March 11, 2022, to the Vaccine Adverse Event Reporting System (VAERS). VAERS is the primary government-funded system for reporting adverse vaccine reactions in the U.S. 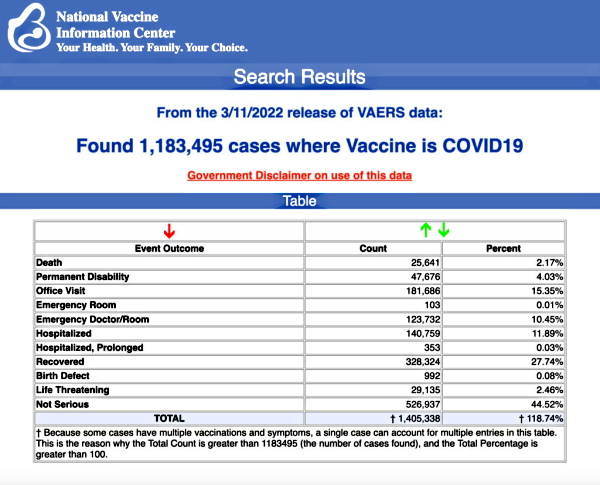 The most recent death involves a 7-year-old boy (VAERS I.D. 2152560) from Washington who died 13 days after receiving his first dose of Pfizer’s COVID vaccine when he went into shock and suffered cardiac arrest. He was unable to be resuscitated and died in the emergency department.

The CDC uses a narrowed case definition of “myocarditis,” which excludes cases of cardiac arrest, ischemic strokes and deaths due to heart problems that occur before one has the chance to go to the emergency department.

“Sudden suicide one week after the vaccine. Patient was a perfectly happy child. After the vaccine, he became much more tired and achy and lost interest in doing his sports. One week later, without any warning, he hung himself.”

Moderna on Thursday asked the FDA to amend Emergency Use Authorization (EUA) of its COVID vaccine to include a fourth dose for adults 18 and older.

According to The Associated Press, the request is broader than Pfizer’s. Pfizer earlier this week asked the agency to authorize a fourth dose of its COVID vaccine for adults 65 and older.

In a press release, Moderna said the request to include adults over 18 was made “to provide flexibility for the U.S. Centers for Disease Control and Prevention and healthcare providers to determine the appropriate use of an additional booster dose of mRNA-1273, including for those at higher risk of COVID-19 due to age or comorbidities.”

Moderna said its decision to seek FDA approval was based on studies from the U.S. and Israel about the Omicron variant, but didn’t provide further information. Booster doses of Moderna are half the dose of the first and second doses.

Pfizer and BioNTech on Tuesday said they submitted a request to the FDA for EUA of an additional booster dose of their COVID vaccine for adults 65 and older.

The companies’ request was not based on robust, peer-reviewed U.S. data, but on two recent studies from Israel — both published on preprint servers without peer review.

The first study was done in conjunction with Israel’s Ministry of Health and involved a review of 1.1 million health records. The study concluded rates of COVID in those who received a fourth dose of Pfizer’s COVID vaccine were lower compared to those who received only three doses.

According to the preprint published on medRxiv, since Jan. 2 Israel has been administering a fourth dose of the Pfizer vaccine only to people over 60 and at-risk populations.

In the second study of Israeli healthcare workers, results showed a fourth dose of either Pfizer’s or Moderna’s vaccine boosted antibody levels, but neither was effective at preventing infections.

The CDC removed tens of thousands of deaths linked to COVID, including nearly a quarter of deaths it had attributed to those younger than 18, The Epoch Times reported. The change was made on March 15 on its COVID data tracker website.

“Data on deaths were adjusted after resolving a coding logic error. This resulted in decreased death counts across all demographic categories,” the CDC said on the website. The agency also acknowledged COVID death data is not complete.

Before the change, the CDC listed 1,755 deaths in children from COVID, along with 851,000 others, according to Kelley Krohnert, a Georgia resident who tracks the CDC’s updates.

The CDC’s statistics are frequently cited by physicians and experts when pushing for children to receive COVID vaccines. Dr. Rochelle Walensky, the CDC’s director, referred to the tracker’s death total on November 2021 while pushing for an expert panel to advise her agency to recommend vaccination for all children 5 to 11 years old.

A vaccinologist at the Mayo Clinic in Minnesota said he developed tinnitus after receiving his second dose of an mRNA COVID vaccine.

Dr. Gregory Poland’s symptoms began 90 minutes after receiving the vaccine. He described the condition as “fairly severe” and “extraordinarily bothersome, interfering with sleep and the ability to concentrate.”

Dr. Gregory Poland, a vaccinologist at the Mayo Clinic in Minnesota, developed tinnitus after his second dose of an mRNA COVID-19 vaccine. He is raising questions about this side effect from the vaccine and suggesting more research is needed.https://t.co/9IXhO9P0cv

According to the National Institutes of Health, tinnitus is a sign that something is wrong with the auditory system. It is commonly described as a ringing in the ears, but it also can sound like roaring, clicking, hissing, or buzzing that accompanies soft, loud or high pitches.

According to the most recent VAERS data released on March 11, 19,851 people have reported developing tinnitus after a COVID vaccine, with 12,027 cases attributed to Pfizer’s COVID vaccine.

The data, released by Andreas Schofbeck of BKK/ProVita, have since been scrubbed from the company’s website.

Schofbeck, who noticed an unexpected jump in vaccine-related health insurance claims, in February notified the Paul Ehrlich Institute (PEI) — the German equivalent of the CDC — that BKK billing data indicated the PEI was underreporting adverse events to COVID vaccines.

In his letter to the PEI, Schofbeck wrote:

I’m “If these figures are extrapolated to the whole year and to the population in Germany, probably 2.5-3 million people in Germany have received medical treatment for vaccination side effects after Corona vaccination.”

Dr. Dirk Heinrich, chairman of NAV-Virchow Bund, an association of private medical practitioners in Germany, said PEI and BKK would be working closely to examine the billing code data. Heinrich also stated that the conclusions from Schofbeck’s letter are “complete nonsense.”

cover image based on creative commons work of spencerbdavis1