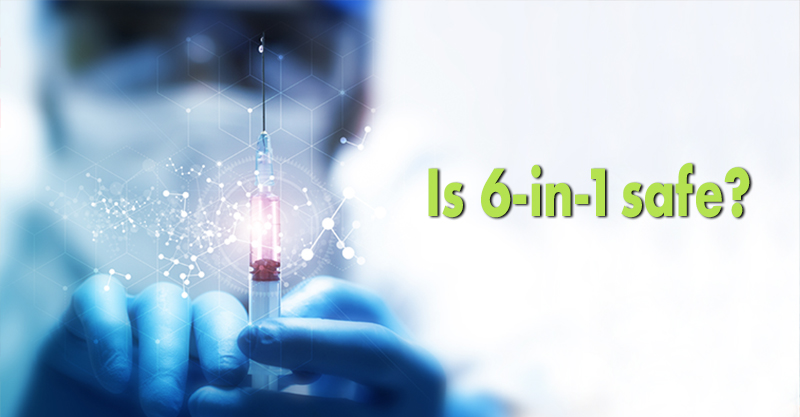 The childhood vaccine schedule in the U.S. features numerous combination vaccines—formulations that bundle multiple antigens for multiple diseases into one injection. Examples of combination vaccines currently given to American children include Merck’s four-component ProQuad vaccine against measles, mumps, rubella and varicella and Sanofi’s five-in-one Pentacel vaccine against diphtheria, tetanus, pertussis, polio and Haemophilus influenzae type b.

The inclusion of Recombivax raises an instant red flag, given that it contains a problematic proprietary aluminum adjuvant possibly linked to serious autoimmune conditions.

Now, the U.S. is preparing to up the combination vaccine ante still further. At the close of 2018, the FDA approved the nation’s first six-in-one (hexavalent) vaccine—a Merck and Sanofi joint effort called Vaxelis intended for infants at ages two, four and six months. Like hexavalent vaccines given to infants in other countries, Vaxelis combines the five components featured in Pentacel along with Merck’s genetically engineered Recombivax vaccine against hepatitis B (HepB).

The inclusion of Recombivax raises an instant red flag, given that it contains a problematic proprietary aluminum adjuvant possibly linked to serious autoimmune conditions. In fact, when a Merck cyberattack in the summer of 2017 temporarily forced Recombivax out of the U.S. pediatric market and American children received GlaxoSmithKline’s HepB vaccine instead, annual reports of HepB vaccine-related deaths to the Vaccine Adverse Event Reporting System (VAERS) dropped by roughly 75% and injury reports halved.

Manufacturers estimate that Vaxelis will become available in the U.S. sometime in 2020.

GlobalData cited the FDA’s approval of Vaxelis as “a major regulatory breakthrough,” noting that a CDC endorsement would “help to bolster vaccination rates across the US,” given that “shot burden” is a “key reason for parents’ failing to adhere to national recommendations.” Right on cue, the CDC’s Advisory Committee on Immunization Practices (ACIP) took the initial step, in June 2019, of recommending Vaxelis for the low-income families who receive vaccines free of charge through the federally funded Vaccines for Children Program. Manufacturers estimate that Vaxelis will become available in the U.S. sometime in 2020.

What about hexavalent vaccine risks, publicized in other countries for decades? On that topic, the CDC and FDA have been largely silent, perhaps because of the next-to-useless design of the U.S. Vaxelis clinical trials, which compared one heavily vaccinated group against another—rather than comparing Vaxelis against an inert placebo. Unsurprisingly, this bogus procedure allowed researchers to conclude that adverse reactions to the vaccines were similar across groups. In other words, “nothing to see here.”

The Vaxelis package insert does note that in the two trials, six infants died in the Vaxelis group (versus one death in the vaccinated comparison group). Trial investigators’ assessment of the deaths denied any relationship to Vaxelis, even though all six infants died within a month and a half of vaccination and even though the murky causes listed—sudden infant death syndrome (SIDS), “unknown cause,” asphyxia, sepsis and fluid in the brain—match up to the types of adverse events reported following hexavalent vaccination in Europe. Considering the Vaxelis package insert information alongside other troubling reports of infant deaths and serious reactions raises questions about whether the FDA and CDC have done proper due diligence.

The authors deemed it plausible that “vaccine components could have a direct role in sparking off a lethal outcome in vulnerable babies.”

EudraVigilance is the European database of suspected adverse drug reaction reports. As of February 29, 2020, the database listed 24,543 adverse events for the long-running Infanrix Hexa vaccine, many of them classified as serious (including over 5,000 nervous system disorders), with the vast majority occurring in the 2-month to 2-year age range.

Seriousness: For the interpretation of the results, please refer to the key considerations at www.adrreports.eu 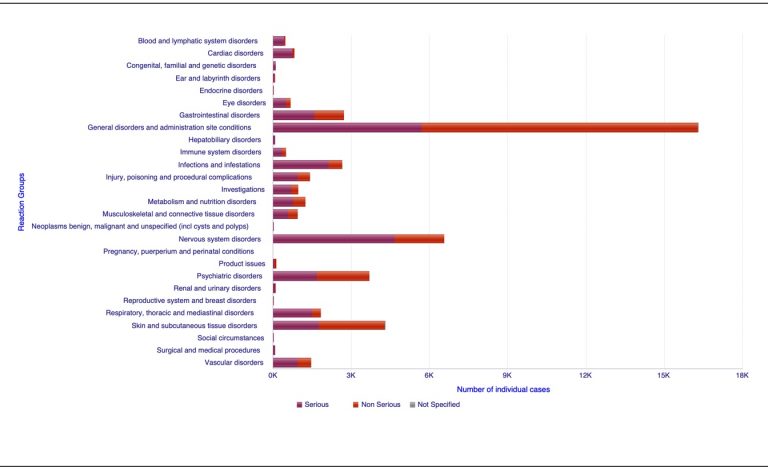 Age Group: For the interpretation of the results, please refer to the key considerations at www.adrreports.eu 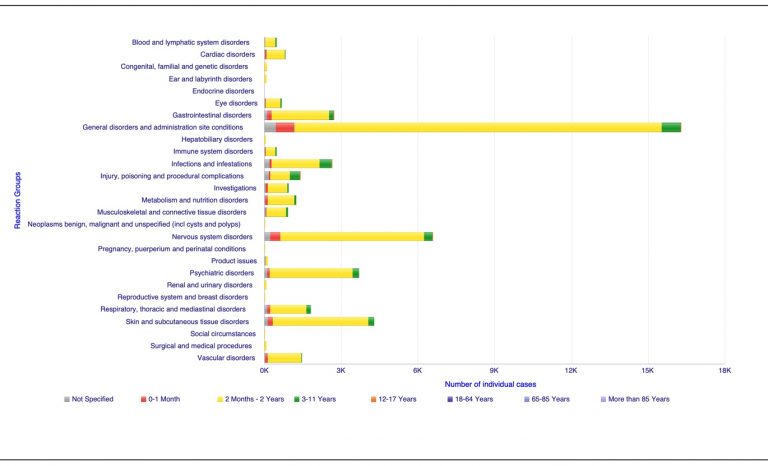 A number of European studies have identified concerns about hexavalent vaccination and SIDS, in particular. One of the most well-known studies, published in 2005 by German researchers, analyzed deaths in the first and second year of life that occurred in “temporal association” with hexavalent vaccination. The researchers concluded that the deaths represented a safety signal and “should prompt intensified surveillance for unexpected deaths after vaccination.” Although a later study disputed the German researchers’ results for infants in the second year of life, it found a statistically significant increased risk of sudden unexpected death in younger infants.

In 2014, Italian researchers conducted histological examinations of over 100 young SIDS victims for whom detailed clinical and environmental information was available. In 12% of the cases, the SIDS deaths occurred within one to seven days of hexavalent vaccination. The authors deemed it plausible that “vaccine components could have a direct role in sparking off a lethal outcome in vulnerable babies.”

“The clustering of deaths soon after immunisation suggests that the deaths could have been caused by the vaccine.”

A parent whose child died in 2019 following Infanrix Hexa vaccination in the Bahamas noted that concerns about an increased risk of adverse reactions were apparent at the outset when GSK “sought approval for the vaccine from European regulators.” Researchers who dived into GSK’s safety reports in 2017 noted a clustering of deaths immediately following hexavalent vaccination, with 93% of deaths in infants taking place within the first 10 days. The authors raised questions about GSK’s apparent deletion of pertinent safety data in some of its reports and stated, “The clustering of deaths soon after immunisation suggests that the deaths could have been caused by the vaccine.”

Studies have also linked hexavalent vaccines to other serious adverse events such as sensorimotor polyneuropathy, shock (“hypotonic-hyporesponsive episodes”) and, in preterm infants, apnea (suspension of breathing) and bradycardia (lowered heart rate). The Vaxelis package insert includes a “shock-like” state as well as high fever (105 degrees Fahrenheit or greater), inconsolable crying lasting over three hours and seizures in its list of possible adverse reactions. A Canadian study that examined an increase in “large local reactions” to vaccines administered at 18 months (Infanrix Hexa, a five-in-one vaccine or MMRV) ascertained that 77% were “causally associated” with the hexavalent vaccine. Over half (54%) of the reactions were “injection site reaction[s] extending beyond the nearest joint and/or lasting ≥ 4 days,” and there was a 5.9 times higher odds of a large local reaction linked to Infanrix Hexa versus even the five-in-one vaccine.

In India, a trial of Infanrix Hexa claimed “no vaccine related serious adverse events” but noted “unsolicited” adverse event reports for over a third (36%) of infants vaccinated at 6, 10 and 14 weeks, and more than one in five infants (22%) vaccinated at 2, 4 and 6 months.

…the investigators concluded that “acute respiratory failure likely due to post hexavalent immunization-related shock was the cause of death.”

Infanrix Hexa and Vaxelis both contain aluminum adjuvants, and a 2012 study shows that sudden death can be linked to these adjuvants. The study’s authors define sudden death syndrome as “an acute disruption of the colloidal stability of the vascular system, which triggers a cascade of events leading to death, whenever compensatory mechanisms . . . are insufficient”; they suggest that aluminum adjuvants in vaccines can explain this type of disruption.

They also note that shock—one of the hallmark adverse reactions associated with hexavalent vaccines—is often one of the “initial manifestations” of sudden death syndrome. An Italian case report published in 2008 described a three-month-old infant who died within 24 hours of receiving Infanrix Hexa; after examining clinical data, postmortem findings and immunohistochemical and laboratory analyses, the investigators concluded that “acute respiratory failure likely due to post hexavalent immunization-related shock was the cause of death.”

Interestingly, Australia observed a 48% increase in hexavalent-vaccine-related adverse events over a recent 12-year period, and the researchers speculated that co-administration of the six-in-one vaccine with the thirteen-strain pneumococcal conjugate vaccine (PCV13) could be a contributor. The PCV13 vaccine also contains aluminum.

Instead of questioning the wisdom of overcrowding the vaccine schedule, officials are playing a shell game, trying to persuade parents that combination vaccines are a terrific solution and that they provide “comparable efficacy to their component vaccines.”

Even proponents of combination vaccines admit that the formulations come with an increased risk of adverse events and that it is difficult to “single out the component responsible.” Considering the available data on hexavalent vaccines, in particular, Dr. Kelly Brogan and Sayer Ji have written:

The aforementioned information clearly indicates that hexavalent vaccine is a possible cause of infant death mistakenly or intentionally attributed to an idiopathic syndrome—SIDS—in order to hide the lethal risks associated with routine immunizations. This leaves parents with the question: could the slippery slope of simultaneous vaccine delivery represent a lethal intervention for my newborn? One that is unlikely to be recognized as such, but for which the literature suggests is a real and present danger?

However, these are not questions that public health agencies want parents to raise. Instead of questioning the wisdom of overcrowding the vaccine schedule, officials are playing a shell game, trying to persuade parents that combination vaccines are a terrific solution and that they provide “comparable efficacy to their component vaccines.” Combination vaccines are also being presented as a boon to medical practices dealing with supply chain and logistics challenges. In fact, in a graphic produced by combination vaccine proponents, the “public health, economic and societal value” of these overloaded vaccines is shown to vastly outweigh the “challenges.”

Meanwhile, Merck and Sanofi are poised “to garner significant patient share from the other available DTaP combination vaccines . . . by offering a reduced vaccine burden for patients.” Before U.S. agencies open the floodgates for hexavalent vaccination, they would do well to remember that “public trust can be lost only once and not acting or acting too late on a [safety] signal . . . could damage credibility of those supporting and maintaining vaccination for many years.”