A friend of mine posted this image on Facebook.   Such a fantastic concept!

“How cool would it be to create a “living cemetery” of these that is a Food Forest — could literally feed one’s descendants, and they would be fed by their ancestors…   [see the link below for a description of a food forest]

Which inspired me to write this little poem:

I like to think of me
as a tree ~
with roots sunk deep
into ancestral dreams
and ever nurtured
by the fecund earth
with a willing embrace
of this world of form.

I like to think of me
as a tree ~
with branches reaching
toward what is to be
and ever enlivened
by the radiant sun
with a willing embrace
of the Élan Vital.

I like to think of me
as a tree ~
transmuting
past into future
heaven into earth
energy into form
dwelling within
the omnipresent.

And as long as I’m dwelling upon thoughts of trees, it feels fitting to share this talk that I delivered at a 911 Tribute in 2005.  (I was speaking in front of 3,000 people, and was so nervous that my knees were wobbling the entire time.)

As we begin our program this evening and prepare for the invocation, I would like to first bring everyone’s attention to the tree festooned with ribbons and streamers that stands to the west of the band shell. This is a Valley Forge American Elm, a testimony to survival – it is naturally resistant to Dutch Elm disease, and it has just been donated by area businesses to serve as a living memorial to all those who died in the attacks on September 11, 2001.

Throughout time, trees have always served as inspiring symbols, symbols of hope, of strength, of peace, and even the symbol of life itself. And in our country specifically, trees have been a symbol of the political principles that we treasure so deeply. The first Liberty Tree, located in Boston, was an Elm tree, just as this one is. The Sons of Liberty gathered and held their meetings in the shade of its branches. They flew their banners from its branches. In time, all 13 colonies each had their own Liberty Tree, which served as rallying places for the ideals of the American Revolution.

The original Liberty Elm in Boston was cut down by British soldiers, as an act of war, in 1775. The last of those original 13 Liberty trees to die was in Maryland, in 1999. It died as a result of a hurricane.

So in trees we see living symbols of our guiding principles, and we also see how those principles might be lost. We find ourselves gathered here this evening with two events in our minds and in our hearts – one, an act of war, 4 years ago, the other, a natural disaster, hurricane Katrina, mere days ago. Both of these events have presented our country with immense suffering and sorrow. Both of these events have presented us with immense challenges. They have challenged us to respond in a fashion that maintains and upholds the democratic principles that we hold so dearly, “that all people are created equal, that they are endowed by their Creator with certain unalienable Rights, that among these are Life, Liberty and the pursuit of Happiness.”

It has been said that the true meaning of life is to plant trees, under whose shade you do not expect to sit – to plant trees for generations that are yet to come. The founding fathers and mothers of this country planted many trees, in the principles they fought for and the institutions they created. We benefit from these trees which they planted so long ago. And so it is now our turn to plant trees. Thus, tonight we dedicate this Elm tree, as a living memorial, as a testimony to survival, as sign of hope for healing and peace. May we also plant trees of principles and institutions that will shelter and serve generations yet to come.

http://www.beaconfoodforest.org
The goal of the Beacon Food Forest is to design, plant and grow an edible urban forest garden that inspires our community to gather together, grow our own food and rehabilitate our local ecosystem.What is a Food Forest?

A food forest is a gardening technique or [Permaculture] land management system, which mimics a woodland ecosystem by substituting edible trees, shrubs, perennials and annuals. Fruit and nut trees make up the upper level, while berry shrubs, edible perennials and annuals make up the lower levels. The Beacon Food Forest will combine aspects of native habitat rehabilitation with edible forest gardening. 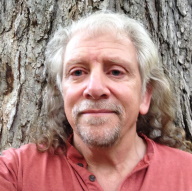 Cnawan Fahey has walked down countless roads in this lifetime, but has found his greatest fulfillment in serving both as a Wilderness Guide and as a Spiritual Guide. His personal credo is “Explore the Great Mystery”, a credo which he has lived out in his many excursions through a multiplicity of Eco-Systems and Belief-Systems.