Elon Musk Is Driving Us Toward a “Smoother” Singularity

Elon Musk Is Driving Us Toward a “Smoother” Singularity

You can drive a Ford F-150 off a cliff, or your Tesla can drive you off instead. Either way, you crash and burn

Tapping the brakes on Ray Kurzweil’s techno-prophecy, Elon Musk recently predicted a “smoother” transition to the extinction of legacy humans. It’s cool, though, cuz free speech and Ukraine satellites and stuff. Besides, who cares about a transhuman Fourth Industrial Revolution so long as it happens slowly?

Either way, you have to wonder where Musk gets these zany ideas.

Ray Kurzweil, a top Google R&D director, famously predicts that around 2045 the converging fields of genomics, robotics, nanotech, and artificial intelligence will reach an inflection point. As he wrote in his 2005 book The Singularity Is Near:

[W]ithin several decades, information-based technologies will encompass all human knowledge and proficiency, ultimately including the pattern-recognition powers, problem-solving skills, and emotional and moral intelligence of the human brain itself. … The Singularity will represent the culmination of the merger of our biological thinking and existence with our technology, resulting in a world that is still human but that transcends our biological roots. There will be no distinction, post-Singularity, between human and machine or between physical and virtual reality.

Following the “law of accelerating returns,” this Singularity will see machines self-improve so quickly, they’ll abruptly become incomprehensible to their human creators—and therefore completely our of our control—forcing us to fuse with them like barnacles on a ship hull.

That is, if they don’t just kill us first.

Because acceleration toward the Singularity will be exponential, according to Kurzweil, it’ll be as if the transformation happened all at once. Whereas most legacy humans are horrified by the prospect, Kurzweil honestly believes rapid assimilation to this nanobot borg will be the best thing to happen to us since sliced bread.

Being slightly more sane, at least in public, Musk has long voiced concerns that an artificial intelligence explosion could mean our extinction. His view is deeply informed by the transhumanist Oxford philosopher Nick Bostrom, whose 2014 book Superintelligence emphasizes how unpredictable this situation really is:

Expert opinions about the future of AI vary wildly. There is disagreement about timescales as well as about what forms AI might eventually take. Predictions about the future development of artificial intelligence, one study noted, “are as confident as they are diverse.”

With that diversity in mind, Bostrom works out every possible way an artificial superintelligence could quietly outpace humanity, gain a decisive strategic advantage, and then consume everything in its path:

The treacherous turn … When the AI gets sufficiently strong—without warning or provocation—it strikes, forms a singleton, and begins directly to optimize the world according to the criteria implied by its final values.

In other words, humans are turned into robot fuel. Elon Musk takes this idea very seriously, but that hasn’t stopped him from attempting to develop strong AI.

When asked for his take on the Singularity in a March 26 interview with Business Insider, Musk offered a curiously blasé response:

I’m not sure if there is a very sharp boundary. I think it is much smoother. … We’ve already amplified our human brains massively with computers. It could be an interesting ratio to roughly calculate the amount of compute that is digital, divided by the amount of compute that is biological. And how does that ratio change over time. With so much digital compute happening so fast, that ratio should be increasing rapidly.

To put it another way, as our minds are absorbed by machines, our brains are being digitized. When asked if one day we could “download our human brain capacity” into Tesla’s new humanoid robot, Optimus, “which would be a different way of eternal life,” Musk replied:

Yes, we could download the things that we believe make ourselves unique…as far as preserving our memories, our personality, I think we could do that.

At one point, Musk’s interviewer lost his grip and went full on fanboy. “You have solved so many problems of mankind and presented so many solutions,” he gushed. But what about increased longevity?

That would cause asphyxiation of society because the truth is, most people don’t change their mind. They just die. So if they don’t die, we will be stuck with old ideas and society wouldn’t advance.

A few days later, Musk took to Twitter to remind the world we need more babies, presumably to jab Neuralink chips into like squalling macaques.

A few days after that, Musk bought nearly ten percent of Twitter’s stock, making him the company’s largest stakeholder. Our hero! Now the masses can discuss post-op tranny suicides and racially insensitive crime stats as they upload their personalities to the borg.

Meanwhile, Tesla is developing an army of robot slaves to place in people’s homes next year, where they can do chores and upload their masters’ every thought and action. The company is already filling the highways with electric self-driving cars—from the Western world to China—simultaneously reducing carbon emissions and human autonomy.

All the while, these bots will be gathering real-world data. Perhaps Musk can add confidential Twitter data to the massive influx.

This flood of physical, digital, and psychological information will soon pour into Tesla’s data centers to train the company’s already impressive AI systems. As Tesla’s algorithms come to resemble the workings of the human brain—or rather, some autistic alien brain—Musk hopes to make the breakthrough to artificial general intelligence, aka the Super Computer God.

Foreseeing this digital deity’s supreme power, Musk hopes his Neuralink brain chips will allow us to interface with the divinized Machine.

The Singularity may be coming on slowly, but Elon Musk is moving fast.

It’s impossible to know where his head is at, but piecing together Musk’s sound bytes and tweets, one hears echoes of the Carnegie Mellon roboticist, Hans Moravec. In fact, the simulation theory—that cornball, screen-junkie delusion that we actually live in a computer simulation, which Musk has repeated publicly many times—has its origins in Moravec.

Without a doubt, Moravec’s lucid, transhuman vision had a profound impact on Bostrom and Kurzweil, who in turn influenced Musk. Like a prophet by the waters of Babylon, Moravec spelled out our fate in his 1988 book Mind Children: The Future of Robot and Human Intelligence:

What awaits is not oblivion but rather a future which, from our present vantage point, is best described by the words “postbiological” or even “supernatural.” It is a world in which the human race has been swept away by the tide of cultural change, usurped by its own artificial progeny.

Out with the old, in with the new!

The ultimate consequences are unknown, though many intermediate steps are not only predictable but have already been taken. Today, our machines are still simple creations, requiring the parental care and hovering attention of any newborn, hardly worthy of the word “intelligent.” But within the next century they will mature into entities as complex as ourselves, and eventually into something transcending everything we know—in whom we can take pride when they refer to themselves as our descendants.

Without shedding a single tear, these robotic “mind children” will replace us.

Unleashed from the plodding pace of biological evolution, the children of our minds will be free to grow to confront immense and fundamental challenges in the larger universe. We humans will benefit for a time from their labors, but sooner or later, like natural children, they will seek their own fortunes while we, their aged parents, silently fade away. Very little need be lost in this passing of the torch—it will be in our artificial offspring’s power, and to their benefit, to remember almost everything about us, even, perhaps, the detailed workings of individual minds.

Imagine becoming a digital wraith, left to float around a data cloud for all eternity. And you thought mass immigration and trans kids were bad ideas.

Transhumanism is a dreamworld where technology is the highest power. In recent decades, this techno-religion has spread from the intellectual fringe to the world’s wealthiest men, and by extension, the most powerful corporations. Klaus Schwab, Kai-Fu Lee, Eric Schmidt, Mark Zuckerberg, Jeff Bezos—all of them offer transhuman fantasies, each with its particular emphasis.

According to his own hype, Elon Musk is making these dreams come true, from sentient robots to AI-powered brain chips. Musk is the embodiment of the Fourth Industrial Revolution, a close partner to China, and arguably the greatest benefactor of the Great Reset. In other words, he’s no friend to legacy humans.

Yes, yes—a little “free speech” is great news in the short-term. Now conservatives can be smartasses on Twitter again. I can’t wait. But where is this tech revolution ultimately going?

When Musk says we’re already cyborgs, perpetually attached our smartphones, he’s not wrong. Rather than waving pompoms because the world’s richest transhumanist bought a stake in Twitter, otherwise sane observers should ask why we’re all plugging into the corporate borg. 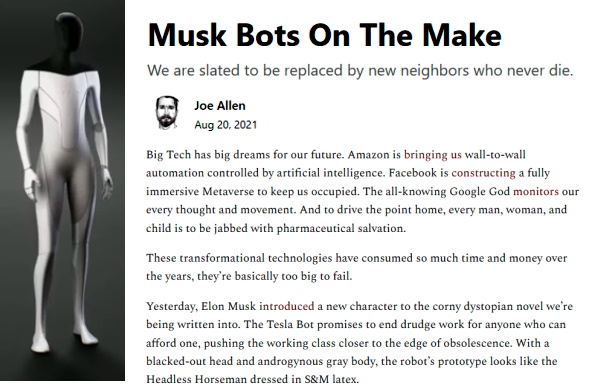