Fauci Is Under Fire on All Sides Now

Home / Gates, Fauci, Schwab & Crimes Against Humanity / Fauci Is Under Fire on All Sides Now

Fauci Is Under Fire on All Sides Now

Dr. Vladimir Zelenko leads a White House petition asking Dr. Fauci and 3 others be charged and brought to justice for “Crimes Against Humanity / Mass Murder”

In March 2020, Fauci, Redfield, Birx, Bright were insubordinate to POTUS and blocked HCQ / Zelenko Protocol access to the American people in the pre-hospital setting. As a result, over 160k people were hospitalized and died unnecessarily. Lets make life saving treatment available and end the pandemic. Let’s bring these criminals to justice.

“Dr. Zelenko is a Hasidic Jewish doctor and a board-certified family practitioner in New York. We first wrote about him in March after he reportedly treated coronavirus patients with a 99% success rate using hydroxychloroquine and zinc. Back in July, Dr. Zelenko reported that he had treated over 1,500 coronavirus patients using a cocktail of the three-drug regimen.

Dr. Zelenko is one of the several doctors who said the deaths of thousands of Americans could have been prevented if they had been treated with hydroxychloroquine. In August, another doctor, renowned epidemiologist and Yale professor Dr. Harvey Risch accused Dr. Fauci and the FDA of causing the ‘deaths of hundreds of thousands of Americans’ that could have been saved by hydroxychloroquine. Dr. Zelenko has since taken his fight for justice to social media. In the early days of coronavirus, he created a Twitter account and also launched a website to promote what he called the ‘Zelenko Protocol’ for the treatment of coronavirus patients.

Yesterday, Dr. Zelenko led a White House petition to investigate Drs. Fauci, Redfield, Birx, and Bright for ‘Crimes Against Humanity and Mass Murder’ and also calling on the White House to make the life-saving treatment available to end the pandemic….

Dr. Anthony Fauci is not the first public figure to be called to be investigated for ‘Crimes Against Humanity and Mass Murder.’ Back in July, over 600,000 people signed a petition to investigate Bill Gates Foundation for ‘crimes against humanity and medical malpractice’ “ 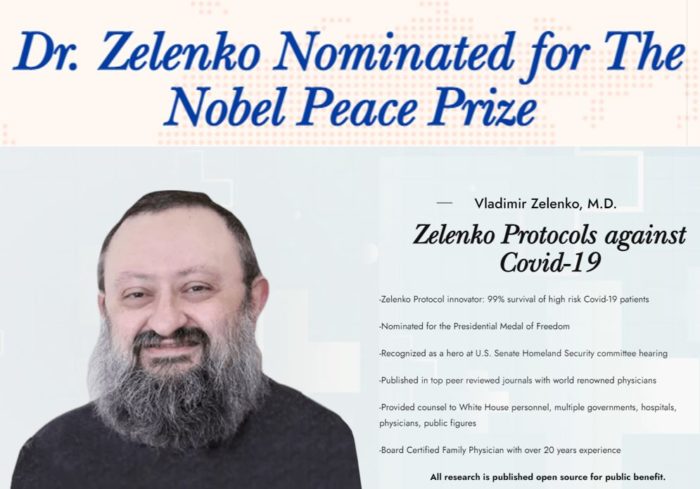 “Dr. Vladimir Zelenko has been included in a group of doctors nominated for the Nobel Peace Prize for their role in addressing the coronavirus pandemic. The list of this year’s nominees includes 43 candidates.

“Basically, the main element of this treatment approach is zinc,” he said in an interview. “Zinc inhibits a very important enzyme called RNA dependent RNA polymerase or replicase. It basically stops the virus from replicating or copying its genetic material, essentially reducing the amount of virus. However, zinc doesn’t get into the cell of the viruses, they need a way to get the zinc into the cell, and that’s the role of hydroxychloroquine in the outpatient setting. Hydroxychloroquine has four other, fourfold mechanisms of action, but those are relevant in the later stages of the disease.

“…. And 3rd component of this was the antibiotic I was using azithromycin, based on the work of Dr. Raoul, and it turns out that azithromycin has both antiviral properties and antibacterial properties, and seem to prevent pulmonary complications.

“But it turns out, very simple: If you wait more than five, six days, that’s when all the lung damage and the blood clots happen. So it’s very important to intervene as soon as possible, as soon as you see the patient and you have clinical suspicion. And it’s very easy to make the diagnosis.”

As his treatment protocol was portrayed by mainstream media as an unsuccessful, dangerous drug regimen, Dr. Zelenko had been saving his patients’ lives with his “Zelenko Protocol” since March 2020.

“I can give you reasons why there’s resistance, it’s very simple. It’s called politics, profit, arrogance, and fear,” he said. Dr. Zelenko did not stop there, however, but flatly called hydroxychloroquine/zinc efficacy deniers “guilty of mass murder“. He led a White House petition asking that Dr. Anthony Fauci and three others be charged and brought to justice for “crimes against humanity/mass murder”.

He concluded his letter to the President:

“Any bureaucratic/man-made obstacles that interfere with doctors’ ability to treat their patients with these well-known, field-tested, inexpensive and life-saving medications in my humble opinion is inexcusable and should be treated as a crime against humanity.”

In Doctors Love It, Fauci Hates It. Why?, Del Bigtree, host of The Highwire, discusses Fauci’s strange opposition to HCQ, a proven inexpensive cure for COVID-19! The show says:

“WHY with so many frontline doctors speaking up on their success treating Covid19 with a 65-year-old FDA-approved malaria drug, many wonder what would motivate our top health officials and social media platforms to silence their voices.”

“As the Covid-19 treatment Hydroxychloroquine continues to be portrayed by MSM as an unsuccessful, dangerous drug, Vladimir Zelenko, MD saved his patients’ lives with his ‘Zelenko Protocol’ since March. Del goes in depth with Zelenko about how he developed his protocol, the attack against the drug, and how his letter to the President might have changed history.”

America’s Frontline Doctors (AFLDS), led by Dr. Simone Gold, held a press conference on July 27. Their message was that Americans need not be afraid of COVID-19 because HCQ is had saved the lives of over 200,000 American COVID patients. Read the transcript of their press conference.

“American life has fallen casualty to a massive disinformation campaign. We can speculate on how this has happened, and why it has continued, but the purpose of the inaugural White Coat Summit is to empower Americans to stop living in fear. If Americans continue to let so-called experts and media personalities make their decisions, the great American experiment of a Constitutional Republic with Representative Democracy, will cease.”

Dr. Gold is the author of I Do Not Consent: My Fight Against Medical Cancel Culture. The Amazon description says:

“The bumper-sticker directive to ‘follow the science’ was actually an evasion of responsibility. It let people off the hook for their bad decisions in a crisis.”

Dr. Fauci published Covid-19 – Navigating the Uncharted in March 2020 in the New England Journal of Medicine. The article says

“…the overall clinical consequences of Covid-19 may ultimately be more akin to those of a severe seasonal influenza (which has a fatality rate of approximately 0.1)…rather than a disease similar to SARS or MERS, which have had case fatality rates of 9 to 10% and 36%, respectively”. 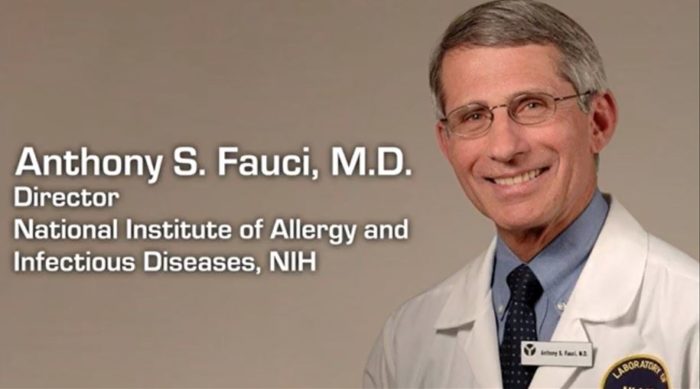 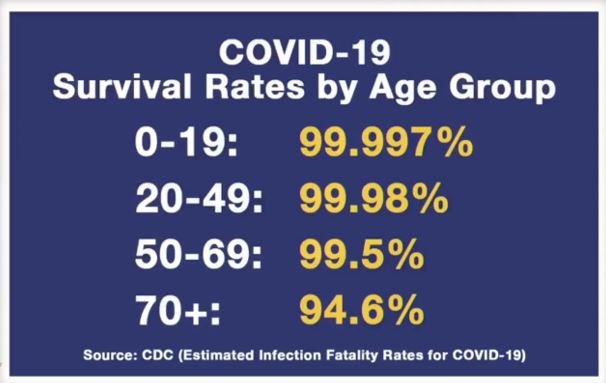 “An ‘urgent preliminary report of Yellow Card data‘ issued by the UK-based Evidence-Based Medicine Consultancy Ltd submitted to the Medicines and Healthcare Products Regulatory Agency (MHRA) states that “the MHRA now has more than enough evidence on the Yellow Card system to declare the COVID-19 vaccines unsafe for use in humans.” 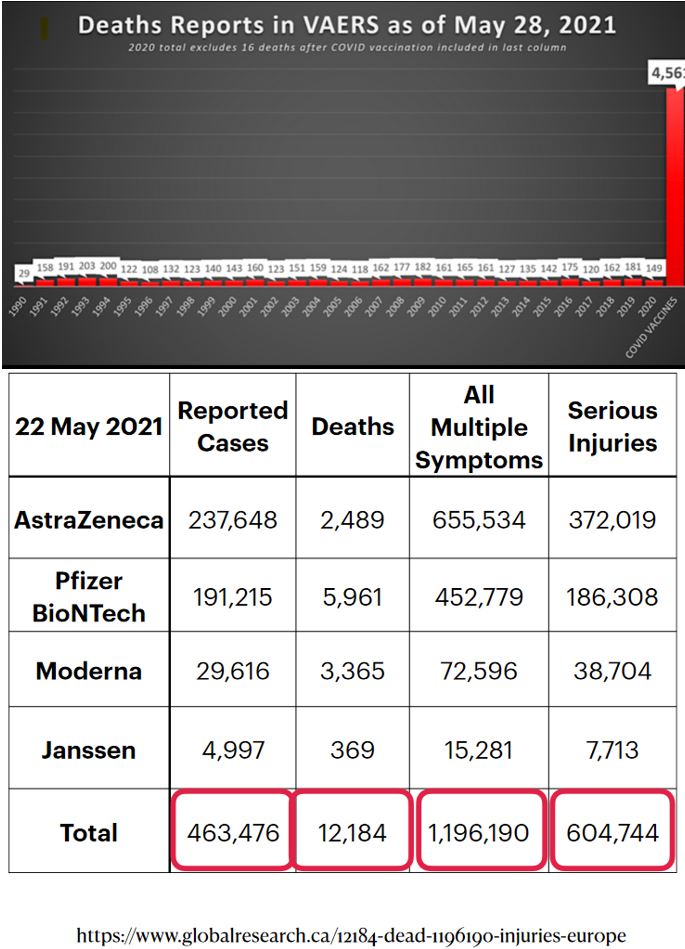 World Renowned Conventional Doc Blasts The COVID JAB-Erwocks includes an interview with Dr. Peter McCullough, Vice Chief of Internal Medicine, Baylor University Medical Center. It says Dr. McCullough “might be the world’s top cardiologist, who also holds an MPH degree and is a professor of medicine.
His work/background is totally stunning, and seems impossible for one person. …Even better, he’s also world famous. Meaning…he has the exceptional intelligence to analyze and dissect the COVID VAX atrocity. The measured way in which he delivers this bombshell is also remarkable.”

Dr. McCullough discusses blood clots for which the J&J product was halted and points out that blood clots caused by the mRNA vaccine are “probably 30 times that” — but it has not been halted. Dr. McCullouogh says “…keep in mind that the NIH is a co-owner of the Moderna patent.”

“One horrific injustice noted is that people are not being fully informed of the vaccine risks, nor of the volume of serious reactions. Official propaganda says “Safe”. McCullough indicts every member of the criminal cartel running this scam, from NIH to the WHO to the Gates Foundation. That spectrum includes the individual most of us know as a criminal from the outset – Anthony Fauci. Not that the clotting issue takes anything away from the part about being WAY past the death point where any drug would normally be pulled.”

Dr. McCullough says if a new drug causes five deaths, it gets a “Black Box Warning”. At 50 deaths, a new drug is called off the market. The 1976 SARS vaccine program was stopped after 25 deaths. However, in the US where about 77 million people have been vaccinated with the COVID shots, there have been reported 2,260 deaths. Yet, those may be just 1-10% of the number because a Harvard study showed that just 1% of vaccine injuries are reported to VAERS. Most deaths from the COVID shots occur on day 1, 2, or 3. Some occur at the vaccination center! Yet, now the plan is to vaccinate 12-15 year olds who have less than a zero percent risk of catching the virus!

Is Fauci Getting Away With Murder or Is The Tide Turning?

Getting Away With Murder Or Is The Tide Turning? by Dr. Mark Sircus links to a video by Tucker Carlson which calls for an investigation into Fauci’s COVID role.

“The mainstream narrative of the COVID pandemic is changing. Mainstream media outlets are now permitting some severe criticisms of Dr. Fauci, Bill Gates, and the entire community of virologists who only know how to sell fear and vaccines…. At first, the reversal was driven by Senators who just got sick of listening to Fauci, who has been more than busy singlehandedly wrecking peoples’ lives and the Constitution. It has ended up as an all-out attack on dangerous viral research while nailing the Wuhan lab as the definitive source of COVID. But perhaps leading the charge was Tucker Carlson from FOX news, who has been asking tough questions about vaccines never before heard in the mainstream….

The 55-year government lifer and windbag, Anthony Fauci, has single-handedly made a mockery of “the science” and the U.S. Constitution during the past 14 months, writes David Stockman. “America is indeed suffering from a dangerous plague—a plague of misanthropic fear-mongering from the likes of Dr. Fauci, the Scarf Lady, and the Biden’s new CDC director, among countless others of the self-designated Virus Patrol.” GOP Rep. Marjorie Taylor Greene introduces a bill to slash Fauci’s $400,000 salary to ZERO until he’s replaced.”

“In the millions of articles, opinion pieces, and news stories written about Covid there is one topic that is more important than all the others.  It’s more important than masks, vaccines, or lockdown measures.  The origin of the virus is critical because no matter how many people die from covid, or how many businesses are wiped out, it’s critical that IF the next virus can be stopped, it must be.

A science writer named Nicholas Wade has written the most thorough study on the origins of Covid to be released to the public.  Wade has worked with Nature, Science, and the New York Times, but this article was released on the public platform Medium. … This is a long read, but it might be the most important article yet written during this pandemic.”

Throughout 2020, the media told us to “follow the science” as presented by Dr. Anthony Fauci. In the video linked below, Del Bigtree, host of The Highwire, played a clip of Fauci claiming that HE IS “The Science” and anyone who questions him is “anti-science”. Bigtree’s Informed Consent Action Network (ICAN) released 3,000 pages of Fauci’s emails — very incriminating correspondence.

IS COVID-19 A BIO-WEAPON?: “Dr. Richard Fleming takes Del through a shocking paper trail surrounding the SARS-CoV2 virus and its link to Fauci and US funded gain-of-function research.” 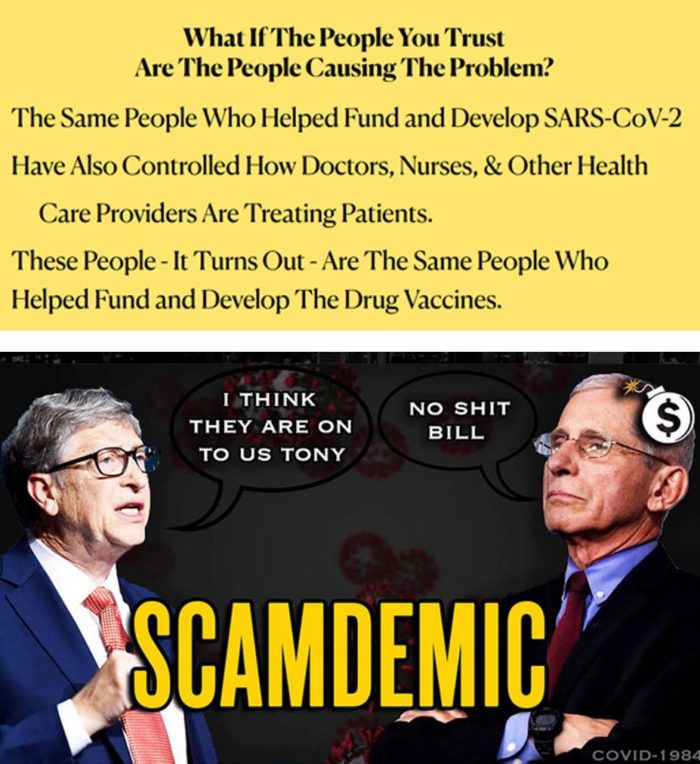 In her Planet Lockdown interview, Pam Popper discusses Fauci’s role in AIDS. In her book COVID Operation: What Happened, Why It Happened, and What’s Next, she calls Fauci “Liar In Chief” and discusses his role in COVID.