Cities worldwide AND entire countries have taken action to ban, delay, halt, and limit 5G installation AS WELL AS issue moratoriums due to economic, environmental, health, and public safety risks.  In fact, the majority of scientists worldwide oppose deployment.

5G opponents in France include citizens as well as legislators (see 1, 2, 3, 4, 5).  In 2020, radiation measurement devices were installed inside 5G towers and a French TV station aired a segment about health risks from it and other wireless exposure.

Nevertheless, deployment has continued and expanded. 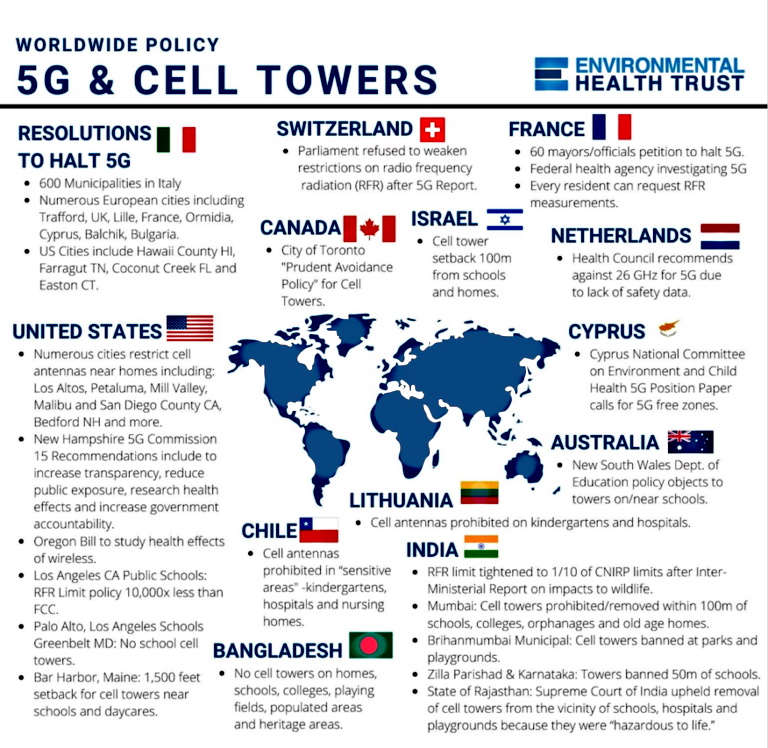 France had a total of 22,857 5G authorized sites as of April 1, of which 12,213 were declared technically operational by the local mobile operators, according to the latest information provided by France’s spectrum agency ANFR.

The agency said that all of the 5G sites have been authorized on existing cellular sites, already used by 2G, 3G or 4G technologies.

ANFR also said that the total number of authorized 5G sites during March increased 5.3% compared to the previous month.

Meanwhile, 6,679 sites are authorized in the 3.5 GHz band (Bouygues Telecom, Free Mobile, Orange and SFR), of which 2,271 are declared technically operational.

Some of the authorized sites are shared by the mobile operators, ANFR said.

French mobile operators are rapidly deploying 5G coverage across the country after they had launched the technology during 2020.

Since 2017, doctors and scientists have asked for moratoriums on Earth and in space (see 1, 2).  Since 2018 there have been reports of people and animals experiencing symptoms and illnesses after installation (see 1, 2, 3, 4).  Of course adverse effects from exposure ARE NOT isolated to 5G.  In 2019 The World Health Organization warned that high levels of Electromagnetic Fields (aka “Electrosmog”) could cause health issues in a significant percentage of the population.