The same day it was announced that President Trump was tested positive for COVID, it was immediately announced that the President was being administered a new experimental COVID drug, Regeneron’s REGN-COV2. 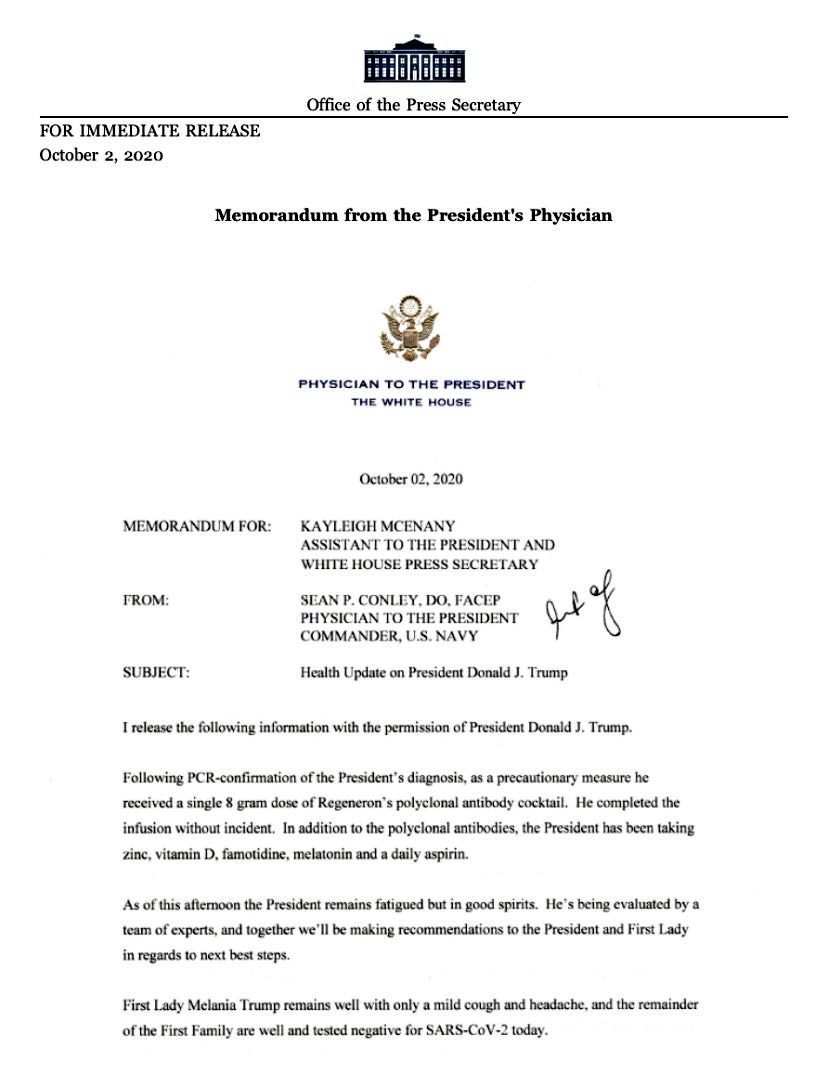 Business journals apparently already had press releases ready about the drug, and the company’s stock immediately went up on Friday.

FiercePharma, one the Pharmaceutical companies’ main marketing trade publications, was one of the first to publish the story:

In a bombshell development Thursday, President Donald J. Trump tested positive for COVID-19, sending shockwaves through the country with just weeks until Election Day. One unanswered question was how the president’s physicians would navigate an uncertain treatment course—and an unproven antibody cocktail from Regeneron is now in the spotlight.

Trump’s early treatment with Regeneron’s cocktail was an immediate boon for investors with the drugmaker’s stock trading up around $20—or 3%—in after-market hours Friday.

Regeneron does not even have emergency use approval yet. FiercePharma also reports that Regeneron’s CEO Len Schleifer has been a guest at the White House during the pandemic.

Unlike another highly touted COVID-19 hopeful, Gilead Sciences’s Veklury (remdesivir), REGN-COV2 has no emergency use approvals anywhere in the world—a fact that could underscore Trump’s relationship with New York-based Regeneron and CEO Len Schleifer, who has been a guest at the White House during the pandemic.

The company said late Friday that Trump’s doctors had requested the therapy under its compassionate use program.

An eventual clean bill of health for Trump could go a long way to boosting confidence in Regeneron’s therapy, which is already raising hopes of $6 billion in sales per year—assuming it can secure the FDA’s approval.

Compared with vaccines, which are being supplied to the U.S. government at $24 on average for a two-dose regimen, antibody drugs could be far more expensive, as they are typically priced well into the thousands, Morningstar analyst Karen Andersen told clients last month. But antibodies could be particularly useful for older adults, whose immune systems may not respond as well to vaccination. (Full article.) (Emphasis Added)

President Trump has transferred more wealth to Big Pharma during the COVID Plandemic than probably all the previous administrations put together, with his Operation Warp Speed and other emergency measures that have given hundreds of BILLIONS of dollars to Big Pharma.

With the Rockefellers controlling the pharmaceutical industry in the U.S. and around the world, this might have been President Trump’s ticket stamped to assure his second term.