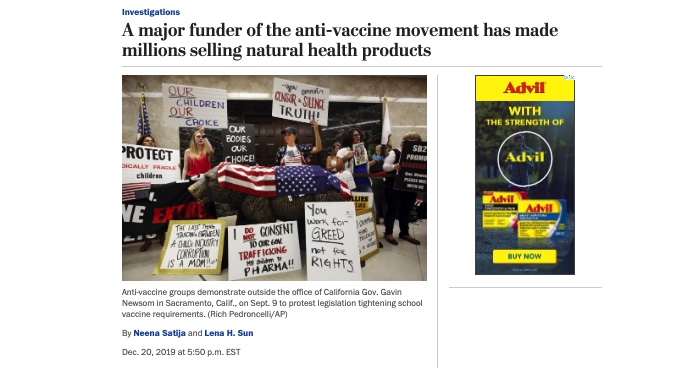 Sun’s function at Washington Post is blindly defending vaccines and defaming all who challenge the Pharmaceutical Paradigm. Because her editors anoint Sun with absolution from fact checking, her hatchet jobs are parades of reckless invention. She refuses to retract her 2017 assertion that all new vaccines are safety tested against the entire schedule even after investigative journalist Jeremy Hammond confronted her with CDC and IOM’s definitive disavowals.

According to Cochrane Collaboration founder Peter Gotczche, FDA approved drugs are now the third leading cause of death after heart disease and cancer. Prescription drugs kill over 200,000 Americans each year. Half die from drug side effects and half from errors by doctors who prescribe those drugs without the encyclopedic understanding required to keep track of their myriad contraindications and interactions. Facts sourced here, here and here.

FDA routinely approves useless and absurdly lethal drugs because Pharma’s control of medical journals has made virtually all the science that FDA relies upon unreliable.

Lancet editor Dr. Richard Horton acknowledged in 2002 that the journals that publish the drug studies upon which FDA bases its approvals “have devolved into laundering operations for the pharmaceutical industry” and that “half the published science is probably untrue.” BMJ editor Dr Peter Doshi calls Pharma’s clinical trials “misleading” and NEJM editor Marcia Angel said “It is simply no longer possible to believe much of the clinical research that is published.” The world’s leading authority on medical research, Dr. John Ioannides said that 90% of FDA’s published medical information is flawed and riddled with conflicts.

Lena Sun puts her trust in government authority instead of science.

[CHD NOTE: The irony in Lena Sun’s headline followed by an ad for a pharmaceutical is inescapable.]