Let’s Contemplate a Future Without Money & How It Would Work

“For the love of money is the root of all kinds of evil. By craving it, some have wandered away from the faith and pierced themselves with many sorrows.”–1 Timothy 6:10

While it is still not commonly held in mainstream discourse that humanity could survive and even thrive without some form of monetary exchange, more and more people that are starting to trace their general discontent about contemporary society to its source are finding money and profit motive at the root of it.

Perhaps the first of the knee-jerk reactions some people might have to the idea of shifting into a money-free system is the sinking feeling of watching their hard-earned wealth evaporate into nothingness, which they might equate with abject poverty. We are so programmed to equate money with abundance that we don’t understand what abundance truly is.

At the heart of it our ‘net’ abundance is shared, and is grounded in the resources available in nature on the planet. The aggregate of these natural resources not only represents our potential abundance but our very survival. A money system grants ownership to many of these resources, and makes it exponentially easier for those with abundance to get more abundance at the expense of the vast majority of people. A money system is, in some ways, antithetical to the proper management and distribution of these resources. Without money, each individual would naturally be entitled to their share of all the resources in the world, and that would never change. But how would such a system work

Jacque Fresco, founder of the Venus Project, believes that the world has reached a level of technology that will allow us to build fully self-sustaining communities all over the world which, when optimally designed, will provide not only an unimaginably high level of abundance for all its residents, but a far greater sense of shared purpose within a community. This vision is grounded in the principles of a Resource-Based Economy:

In a Resource Based Economy all goods and services are available to all people without the need for means of exchange such as money, credits, barter or any other means. For this to be achieved all resources must be declared as the common heritage of all Earth’s inhabitants. Equipped with the latest scientific and technological marvels mankind could reach extremely high productivity levels and create abundance of resources.–Venus Project website

In the video below is a brief introduction to Fresco’s inspiring vision of our potential future. More information. including where the Venus Project is at on their timeline, is available on their website.

No Need For Trade

Since money is nothing more than a medium of exchange, it is only in removing the convention of exchange or ‘trade’ itself that then renders money obsolete. That’s why a Resource-Based Economy proposes that ‘all resources must be declared as the common heritage of all Earth’s inhabitants.’

In his TedX talk, Colin Turner really questions the idea that ‘trade’ is the only organizational model for life on the planet, and in fact outlines the ways in which trade is actually antithetical to human abundance and well-being:

We all more or less accept trade as being the de facto way of operating our society, so much so that we even see it as some kind of universal law. But it might surprise you to know actually that trade has only existed in relatively recent years, that in 90% of our modern human history we didn’t actually trade at all, there still are no archaeological traces of trade. In these early tribal, agrarian communities what actually happened was there was an implied understanding that everyone in the tribe looked after each other. And this was how the tribes operated for perhaps the vast majority of our early human history.

So we see trade now as a very important way of doing business, and you have to say that trade works, I get what I want and you get what you want and we all go home happy. But when you actually scratch the surface a little bit more about how trade actually pans out in the real world, it’s not such a nice story. It seems to be a better theory than actually works out in practice.

For example, the most obvious case is, about 3 billion people in the world today live on $2.50 or less a day–many of them much, much less than that. Obviously they are wracked with starvation or dying of curable diseases, so, I mean, you have to ask yourself, is trade really working for them, for those people? Clearly, it isn’t.

Colin Turner is the founder of The Free World Charter, which currently has 58,611 signatories among people from 215 different countries (and would welcome yours, if you are so inclined). The charter constitutes a set of principles that really formalizes the notion that all human individuals are entitled to maintain an equal share of the Earth’s resources, but it also outlines the natural responsibilities and practices that each individual would assume in order to live optimally and harmoniously together in a money-free community and world. Here are the ten principles:

These are certainly not the final words on which principles should truly define a future society and world free of money, but in reading them one can clearly grasp the overall essence of the kind of mindset we will need to develop and implement in our lives if we are to shift into this new paradigm.

Walking Away From A Money Economy

The shift we are looking for here is grounded in a conscious move by the individuals of this planet away from a model of competition and towards a model of cooperation. We are all quite familiar with both, as we surely have an ample amount of experience in both ways of relating to the people around us. If you could choose right now, which kind of model would you want as the basis for the entire planet?

Some might argue that the competitive/trade/money paradigm has been instrumental in getting us to make progress, especially technologically, which we may not have achieved by remaining with the cooperative tribal model. There may be some truth in this. But does it not seem that, at this time in history, most of us have had it with the debt, scarcity, and inequality that is a hallmark of the money model? Are we not hungering for more love, cooperation and shared abundance imbued in the very organizational structures we create for ourselves to live?

Understand that making this change is not as simple as going to the United Nations or other authoritative world body, as Jacque Fresco has already done. Presenting a compelling vision of a future without money to the benefit of all of humanity does not automatically mean that the world authority will implement it right away. The powers behind world authority like the UN are actually made up of those who have the most money. What we see going on in the public arena are essentially the machinations of the puppets they control.

This is nothing new. An overall system that maintains power by the few has been in place ever since money and exchange were introduced. While in the past this wealth was protected over generations and generations by certain families who were the visible ‘royalty,’ ‘noblemen’ and ‘aristocracy’ of the day, today’s world only differs in the sense that these powers are more hidden from sight, while countries maintain the illusion of having some form of ‘democracy.’

The point is that we will never be able to elicit the help of our authority if we want to abandon our current money economy. Those in authority, who at the very top own a vast percentage of the world’s resources, certainly believe they would have the most to lose if we moved to a model founded on equally-shared abundance. What we actually need to do is elicit the help of each other, energizing important movements and fostering an awakening as to how powerful we actually are as a collective. When a critical mass of us begin marching in step to a new way of life, the current authority will have no power to stop us.

A money-free society and world can certainly work from the standpoint of creating abundance for everyone on the planet. What is needed is a new awareness founded on some of the natural principles discussed here. The more that individuals of the planet slowly move away from competitive money-centered practices and spend their time and energy cultivating cooperation, the more quickly we will be able to collectively walk away from a system that no longer serves us. 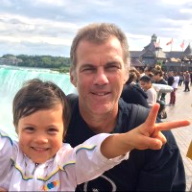 Richard Enos has lived and taught in Korea, studied yoga in India, written a book entitled Parables for the New Conversation,  and built a film and theater production company (pandorasboxoffice.ca). While he endeavors to foster positive change in the world through his works, he holds to the maxim ‘Change starts within’. He is a contributing writer with Collective Evolution.