They tell us vaccines are “safe and effective.”

They tell us vaccine risks are “rare.”

What if none of these claims are true?

In 2019, Joy Garner with The Control Group set out to answer that question by conducting a litigation survey of never-vaccinated people. They found that, in every case, the claims we hear from our vaunted government and TV experts about the risks and benefits of vaccines are demonstrably false.

In fact, they learned that the tiny, vaccine-free minority of Americans is far healthier overall than the vaccinated majority.

But let’s step back for a moment to the questions we should all be asking about those familiar claims.

In its 2011 case, Bruesewitz v. Wyeth, the US Supreme Court acknowledged that vaccines cause injuries.

“The National Childhood Vaccine Injury Act of 1986 (NCVIA or Act) created a no-fault compensation program to stabilize a vaccine market adversely affected by an increase in vaccine-related tort litigation and to facilitate compensation to claimants who found pursuing legitimate vaccine-inflicted injuries too costly and difficult.”

The Court noted that vaccine injuries are unavoidable.

“Most importantly, the Act eliminates manufacturer liability for a vaccine’s unavoidable, adverse side effects.” 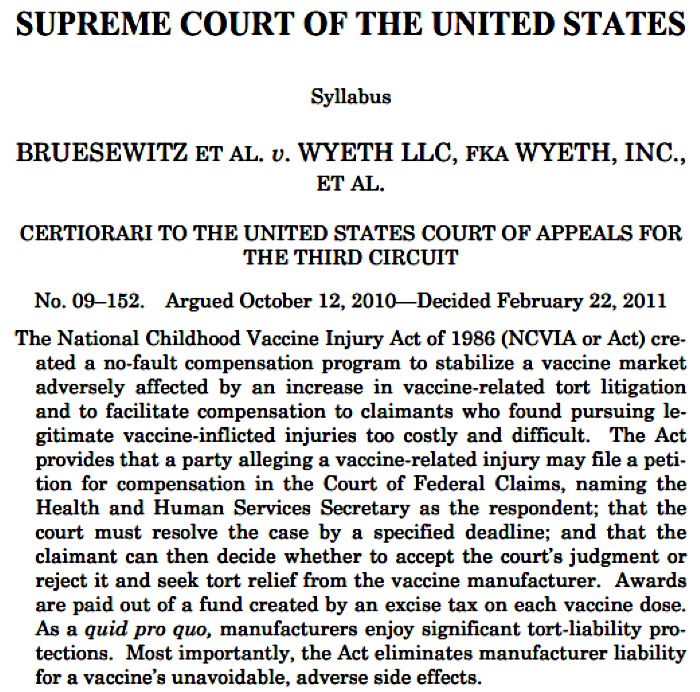 Justice Scalia noted that the FDA regulations specify no criteria for measuring, much less ensuring, the claimed safety or effectiveness of vaccines.

“Indeed, the FDA has never even spelled out in regulations the criteria it uses to decide whether a vaccine is safe and effective for its intended use.”  (Emphasis added.)

To make our answer even clearer, the law classifies vaccines as “unavoidably unsafe products.”

“Unavoidably unsafe products. There are some products which, in the present state of human knowledge, are quite incapable of being made safe for their intended and ordinary use. These are especially common in the field of drugs.”

The excerpt above aptly notes the common and more direct synonym for the word unsafe. That synonym is: dangerous.

To emphasize the point, the 1986 law gave vaccine makers immunity from legal liability and created a no-fault vaccine court that compensates families for documented vaccine injuries and deaths out of a taxpayer fund.

So the answer to the question “Are vaccines safe?” is a solid and resounding “No.”

We know for a fact vaccines are dangerous. They absolutely cause injuries and deaths. And yet “the authorities” have decided for us that the benefits outweigh the risks. What is that decision based on?

Why we don’t know is a long story. But the key reasons are these:

Despite what we’re told, we simply can’t know whether getting common infections is more dangerous than getting vaccinations for them without studying the health outcomes of both vaccinated and unvaccinated subjects.

Again, there’s something vitally important we don’t know about a widely and coercively used class of product.

And again, it’s a long story.

There are many reasons we don’t know how “rare” (or common) vaccine injuries and deaths are. They include these:

“Rare” can only be judged in relation to something else. In the case of vaccine harms, we need a substantial group of vaccine-free citizens and a clear accounting of their health issues to compare the relative “rarity” (or frequency) of harms in people who get vaccines to the frequency of such harms in people who don’t.

This reference population exists for moment, though their numbers are falling. And our esteemed authorities steadfastly refuse to study them.

That’s why the answer to question three, “Are vaccine risks rare?” is also “We don’t know.”

The Looming Extinction of Our Endangered Vaccine-Free Population

Joy Garner realized that the most important group of people in America was being driven toward extinction by ever more forceful vaccine mandates, dwindling exemptions, and blatant coercion.

Her survey group represents the desperately needed “control group” for this massive experiment our authorities have been conducting on our children, and increasingly on adults, for at least 30 years now. Only the never-vaccinated among us can show us what life and health look like when we let our immune systems do their jobs and manage illnesses as they come along.

The vast majority of Americans—99.97%, or more than 329 million—have been exposed to vaccines.

By contrast, our tiny group of vaccine-free citizens makes up only about 0.26% of the population, or roughly 800,000 children and adults.

Yet, curiously, they are often feared and blamed for all the ills of the majority. Do the healthy, unvaccinated few among us really have that much power?

Garner saw the decline of the unvaccinated control population and knew it was vitally important to gather the wisdom manifested in their health trajectories while it was still possible. And it was important to protect this endangered species from extinction.

Garner named her litigation The Control Group for obvious reasons. Her passion and love for others drove her to tackle this project our authorities should have done, and still should do on a larger scale.

But it was her intelligence and business experience that gave her the skills and confidence to pull it off.

After all, at its core, the task was straightforward:

The survey instruments themselves were streamlined into two forms, and the process followed appropriate protocols for collecting and reporting health data for litigation. The forms prompted respondents to report all illnesses and disabilities.

Garner reached the subject population by promoting the survey through social media, radio interviews, events, referrals and other means.

Surveys were manually completed and mailed back (or handed back at events) to help eliminate some of the flaws in online, electronic surveys.

Garner compiled and evaluated the results using established statistical practices, and engaged experts in relevant fields to validate the forms and the process as well as the results.

And she acquired comparable statistics for the vaccination population from national health reports.

In the end, survey respondents represented a solid 0.179% of the entire vaccine-free population, estimated during the survey period at around 832,521 Americans, and ranged in age from under 1 year to 73.

From the data on both groups—the vaccinated and the never-vaccinated—her team generated graphs that tell a powerful story, one every American, indeed, every citizen of the world, should hear. Now. While they still can.