After collecting and analyzing the health information for all the unvaccinated children in these four school districts, the results were as follows: 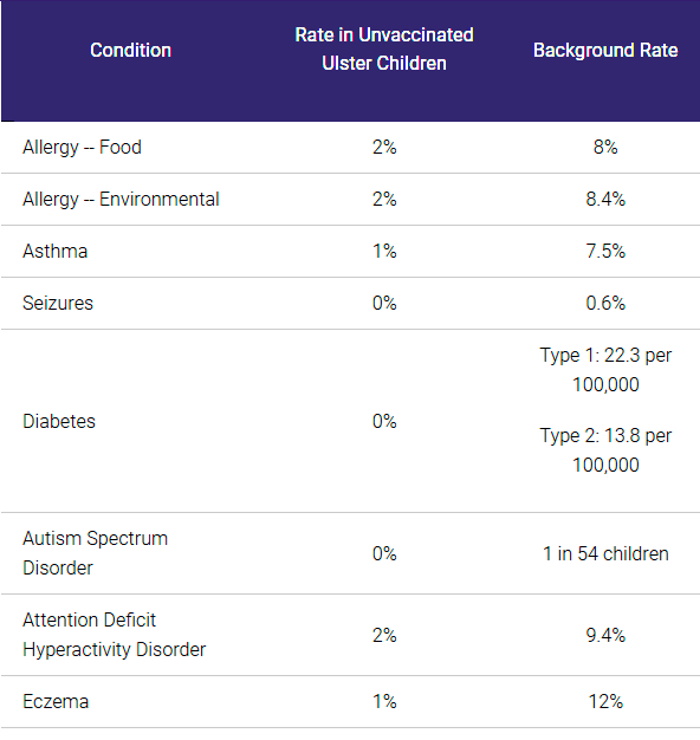 Although not shocking to ICAN, these results should elicit a reaction from and a response by public health authorities and an education department which mandates vaccines.  Instead,  NYSED chose to completely ignore the letter and its findings.  NYSDOH sent a half-page response almost a full month later.  That response stated that “[d]etailed information concerning the efficacy and safety of childhood vaccinations is widely available to the public” and directed the Ulster Families to NYSDOH’s “Vaccines and Immunizations” webpage and to the CDC’s “Vaccine Safety” webpage which relates, for the most part, to COVID-19.  It also claimed that the detailed information concerning the safety of childhood vaccines is available “in decades of scientific literature.”  No scientific literature was cited or produced.  And because they can never miss the opportunity to do so, the NYSDOH also cited to the infamous case from 116 years ago – Jacobson v. Massachusetts – for the idea that “the State’s authority to mandate vaccinations in schools and other settings, as an essential tool to protect the public health, has been clearly established.”

Completely ignoring the data within the letter, the NYSDOH concluded that:

Vaccinations are one of the most important methods available to protect children from serious and sometimes deadly diseases, and the Department of Health will continue to support childhood vaccinations and the enforcement of Public Health Law mandates for vaccinating school-age children.

On August 11, 2021, a response was sent to NYSDOH pointing out the glaring omission from the NYSDOH’s response of even a shred of evidence to support that the growing rate and list of chronic diseases and disabilities affecting children are not caused by vaccination.  NYSDOH was therefore warned that, absent receipt of this proof, the attorneys have been directed to commence an action challenging the constitutionality of the school immunization requirements for kindergarten through the twelfth grade.

One must wonder whether there is any data that could be submitted to these public health agencies that will change their unwavering belief in and allegiance to vaccines.  And aren’t they troubled by the fact that they cannot produce any evidence to support their claims?  The answer is apparently hidden in plain sight when the NYSDOH writes that “the Department of Health will continue to support childhood vaccinations and … mandates for vaccinating school-age children.”  It is this blind faith and belief, without proof, that should trouble every person living in this country living under rules dictated by these medical autocrats.