Pfizer Has Secret Government Contracts for Covid Vaccines: Advocacy Group Says Company Puts Profits Over Public Health and Reveals Seven of Its Contracts Are Worth $5 Billion

Pfizer Has Secret Government Contracts for Covid Vaccines: Advocacy Group Says Company Puts Profits Over Public Health and Reveals Seven of Its Contracts Are Worth $5 Billion

Incisive report by the Daily Mail.

Pfizer has 73 formalized deals for its COVID-19 vaccine but of those, only five have been formally published by governments and include ‘significant redactions,’ Public Citizen found.

The seven known contracts reviewed by Public Citizen are worth more than $5 billion.

The report accuses Pfizer of including secret language blocking donations of its own doses, opposing an intellectual property waiver that could have allowed for the sharing of technology, having ‘unilateral authority for other decisions’ and more.

Pfizer’s COVID-19 vaccine – the first to receive emergency use authorization in the U.S. – has become the most popular worldwide, with 3.5 billion doses purchased. 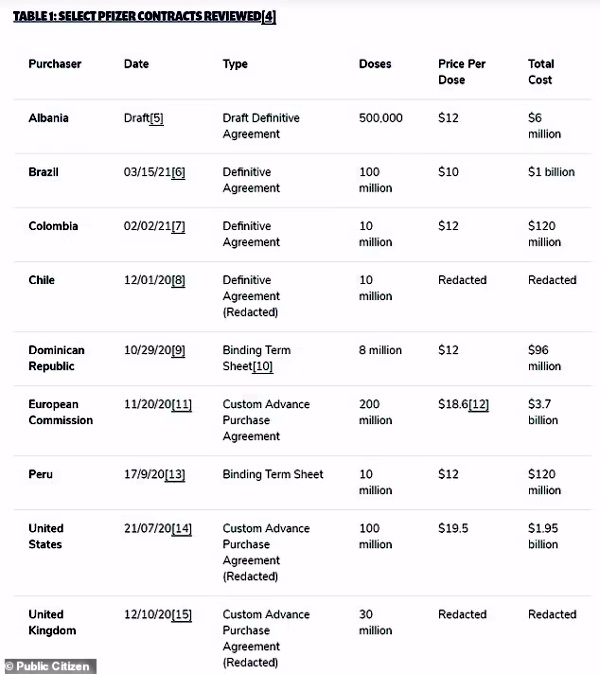 Pfizer has 73 formalized deals for its COVID-19 vaccine but of those contracts, only five have been formally published by governments and are heavily redacted. The known contracts are worth $5 billion and were reviewed by Public Citizen, which outlined its findings (pictured)

Experts predict its sales to double in 2022, the Washington Post reported.

Due to the fact that information in several contracts remains redacted, it is unknown exactly what the total cost of all agreements are.

Experts allege that secret contracts poses risks to others.

‘Hiding contracts from public view or publishing documents filled with redacted text means we don’t know how or when vaccines will arrive, what happens if things go wrong and the level of financial risk buyers are absorbing,’ Tom Wright, research manager at the Transparency International Health Program, said.

‘The contracts offer a rare glimpse into the power one pharmaceutical corporation has gained to silence governments, throttle supply, shift risk and maximize profits in the worst public health crisis in a century,’ the group’s report alleges.

Contract experts, who reportedly analyzed the leaked documents, claim that Pfizer uses ‘unfair and abusive’ contractual terms in negotiations that give them the right to silence governments.

Our thanks to the Daily Mail