Reports of Deaths After COVID Vaccines Up by 259 in 1 Week, CDC Data Show

Reports of Deaths After COVID Vaccines Up by 259 in 1 Week, CDC Data Show

Data released today by the Centers for Disease Control and Prevention (CDC) on the number of injuries and deaths reported to the Vaccine Adverse Event Reporting System (VAERS) following COVID vaccines remain consistent with previous weeks, with the exception of a 31% spike in reports of Bell’s Palsy.

Every Friday, VAERS makes public all vaccine injury reports received by the system as of Friday of the previous week. Today’s data show that between Dec. 14, 2020, and March 5, a total of 31,079 total adverse events were reported to VAERS, including 1,524 deaths — an increase of 259 over the previous 7 days — and 5,507 serious injuries, up 1,083 over the same time period.In the U.S., 85.01 million COVID vaccine doses had been administered as of March 5. 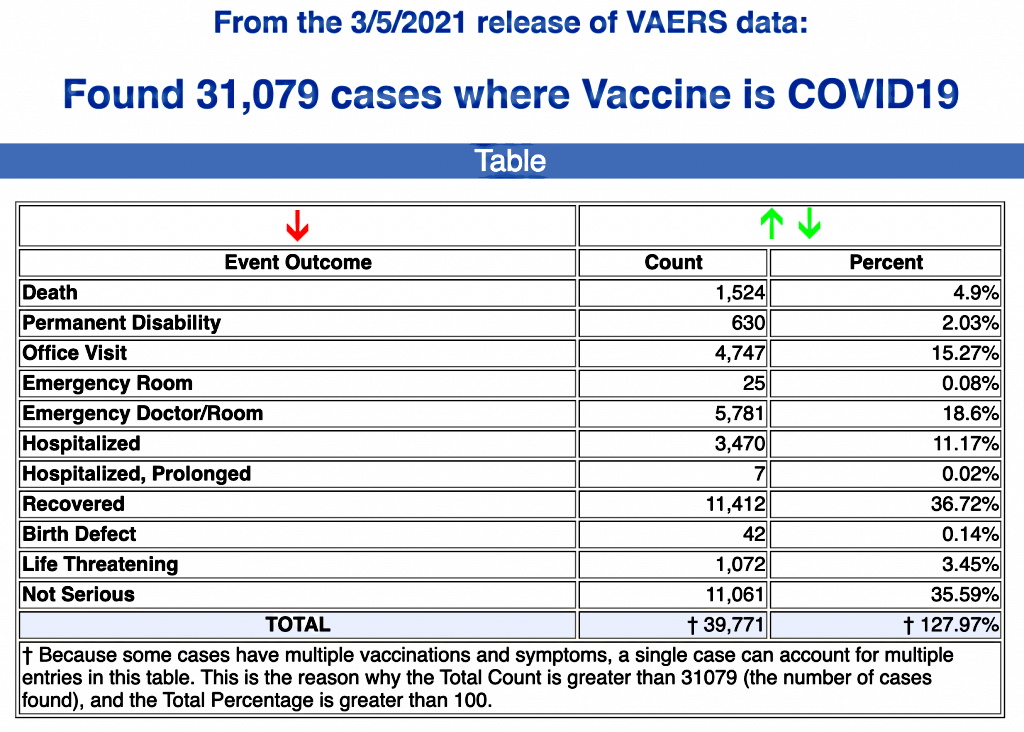 VAERS is the primary mechanism for reporting adverse vaccine reactions in the U.S. Reports submitted to VAERS require further investigation before a causal relationship can be confirmed.

This week’s 31% increase in reports of Bell’s Palsy marks a break with past trends. Otherwise, today’s data reflect trends that have emerged since The Defender first began tracking VAERS reports related to COVID vaccines.

The first Johnson & Johnson COVID vaccine was administered in the U.S. on March 2. As of March 5, two adverse events related to the vaccine had been reported to VAERS. Both occurred in young people, and the reactions included tongue tingling and numbness, hot flashes, headache and extreme fatigue.

On March 10, The Defender reported the death of a 39-year-old woman who died four days after receiving a second dose of Moderna’s COVID vaccine. Kassidi Kurill died of organ failure after her liver, heart and kidneys shut down. She had no known medical issues or pre-existing conditions, family members said. An autopsy was ordered, but Dr. Erik Christensen, Utah’s chief medical examiner, said proving vaccine injury as a cause of death almost never happens.

Last month The Defender reported that a 58-year-old woman died hours after getting her first dose of Pfizer’s COVID vaccine. State and federal officials said they were investigating her death but did not perform an autopsy. A public records request revealed emails between State Health Commissioner Normal Oliver and public information officers that suggest officials were “concerned the death of Keyes, who is Black, could worsen vaccine hesitancy among minorities,” reported The Virginian Pilot.

State officials refused to answer how medical examiners could thoroughly rule out other potential causes of death triggered by or linked to the shot without an internal examination of the body.

The family was forced to get their own private autopsy. Keyes’ daughter said that even before state officials had her mother’s postmortem preliminary test results, the medical examiner’s office told her they would not perform an autopsy. They told her “nothing could be gleaned from an autopsy that would relate the vaccine to her death.”

On March 11, Denmark, Norway and Iceland announced they were joining other European countries in temporarily suspending use of the AstraZeneca-Oxford COVID vaccine following reports of blood clots in people who got the vaccine, The Defender reported. The Danish decision came days after Austrian authorities suspended a batch of AstraZeneca’s COVID vaccine while investigating the death of one person and the illness of another after receiving the shots. The same batch used in Austria was used in Denmark, according to Reuters.

On March 9, Australian Health Minister Greg Hunt was hospitalized two days after taking AstraZeneca’s COVID-19 vaccine. He received antibiotics and fluid. A link to the vaccine was ruled out, reported Reuters.

The AstraZeneca vaccine has not been cleared by the U.S. Food and Drug Administration for Emergency Use Authorization, but the drugmaker said last week it plans to apply soon.

Meanwhile, Pfizer is gearing up to protect itself from any financial risk associated with vaccine injuries in those countries where, unlike in the U.S., there are no laws in place to indemnify the vaccine maker against liability for injuries.

As reported by The Defender on March 9, Pfizer is demanding countries put up sovereign assets as collateral for expected vaccine injury lawsuits resulting from its COVID-19 inoculation after Argentina rejected Pfizer’s request to enact legislation indemnifying the company from liability for injuries. Pfizer wanted Argentina and Brazil to guarantee the company would be compensated for any expenses resulting from injury lawsuits against it.

Pfizer demanded Brazil waive sovereignty of its assets abroad in favor of Pfizer, not apply its domestic laws to the country, not penalize Pfizer for vaccine delivery delays and exempt Pfizer from all civil liability for COVID vaccine side effects. Brazil rejected Pfizer’s demands, calling them “abusive.”

Nine other South American countries have reportedly negotiated deals with Pfizer. It’s unclear whether they actually ended up giving up national assets in return.

In the U.S., vaccine makers already enjoy full indemnity against injuries occurring from this or any other pandemic vaccine under the PREP Act. COVID vaccine injury claims are filed with the Countermeasures Injury Compensation Program (CICP), which is funded by U.S. taxpayers. The CICP is administered within the Department of Health and Human Services, which also sponsors the COVID-19 vaccination program.

Megan Redshaw is a freelance reporter for The Defender. She has a background in political science, a law degree and extensive training in natural health.