Social Creeptocurrency?: A Letter to the Editor From Isabel H.

[Editor’s Note: Isabel H. wrote a letter to me recently with the subject line “Social Creeptocurrency?”. She has been doing some interesting dot connecting around the proposed use of specific body activities as a way to earn cryptocurrency. She wanted to put this information out there for other researchers and to share her questions with readers here, hoping that someone might be able to use her information for deeper research. ~ Kathleen]

Social Creeptocurrency? — Notes from the research of Isabel H.

What could possibly be a connection between a cryptocurrency system using body activity data (patented by Microsoft), a Texas lawyer representing undocumented immigrants, and GRIMES, Elon Musk’s girlfriend?

However, it is interesting how they seem to intertwine. 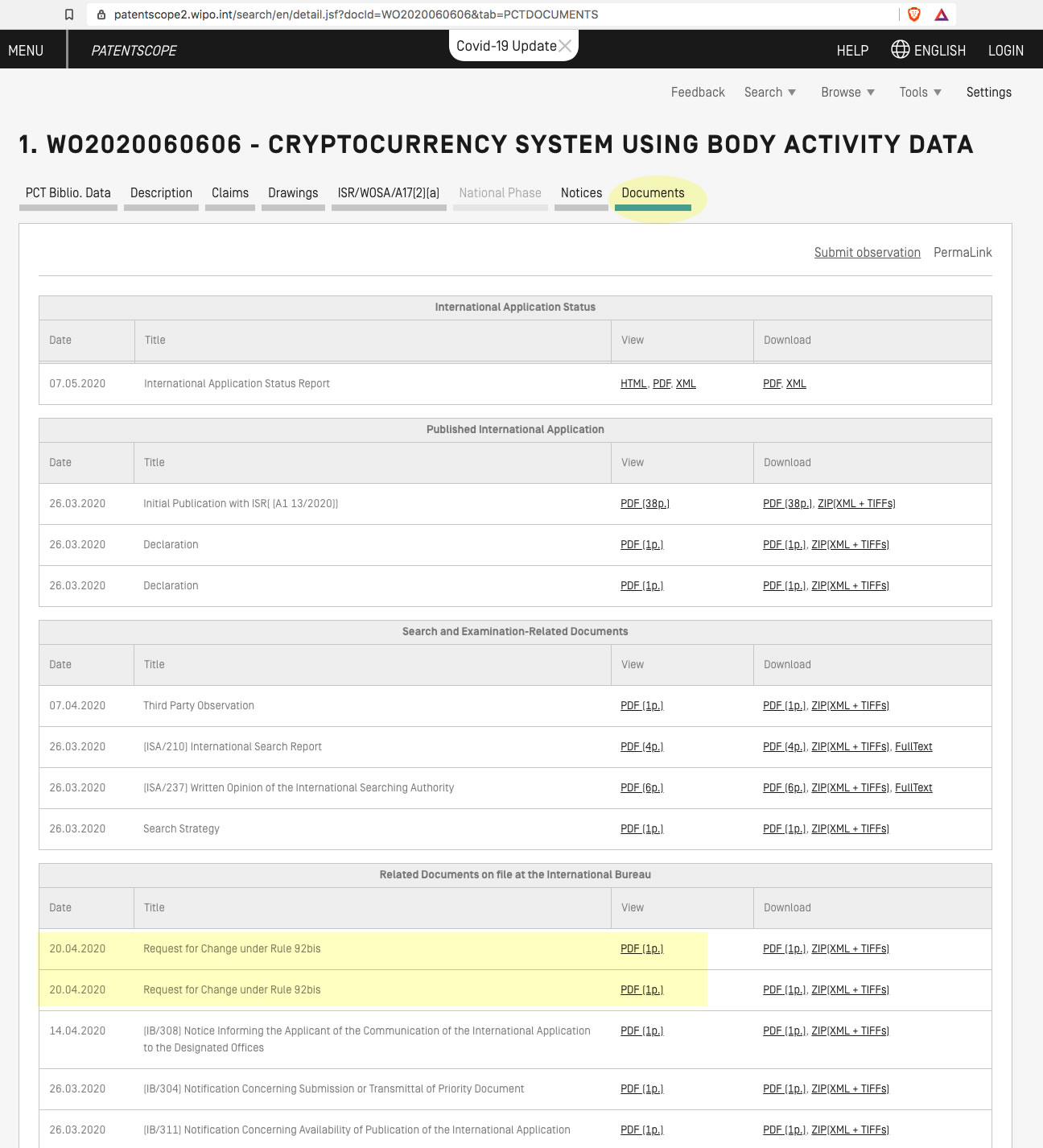 Checking the documents available on this page, we can see that on 20/04/2020 there was twice a “Request for change under rule 92bis” – both times the request was made by the same person, Nicole True. Once as the applicant-inventor, acting as a ‘Natural person’ T. Nicole – and at the exactly same time (20 April 2020 04:04:37 EST) another one where Nicole True apparently was the applicant, this time not acting as a natural person but as a Legal entity with the mention of “Succession: Legal Heirs”.

This message says: Hello, Nicole True here, I would like to travel to Tokyo with GRIMES. Thank you. 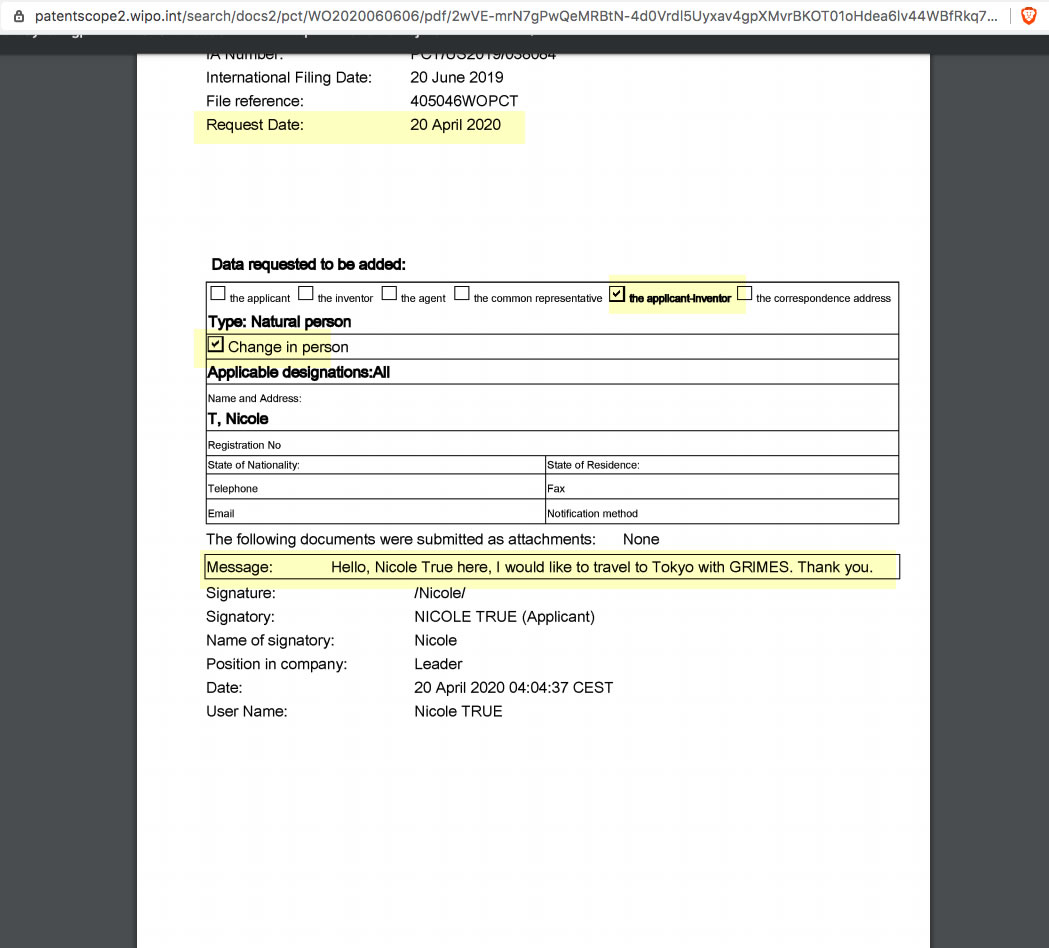 Isn’t this a rather strange message to appear on a document Request for Change under Rule 92bis concerning a patent from Microsoft with regard to a cryptocurrency system?

Who is Nicole True anyway? 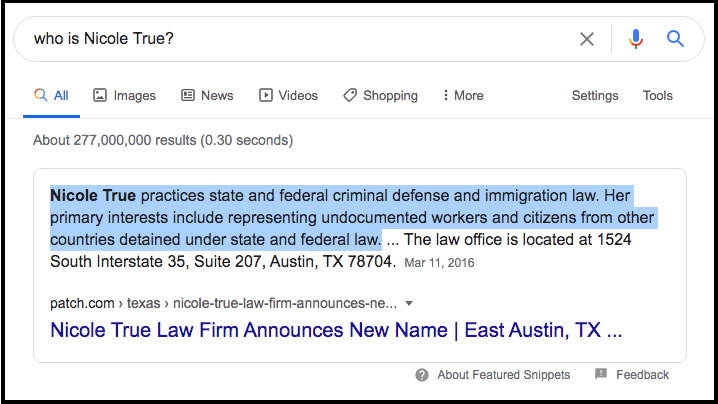 According to Google: Nicole True practices state and federal criminal defense and immigration law. Her primary interests include representing undocumented workers and citizens from other countries detained under state and federal law.

And who is GRIMES? And is she travelling to Tokyo soon?

According to Wikipedia: Claire Elise Boucher (born March 17, 1988), known professionally as Grimes, is a Canadian singer and musician. (…) Since 2018, Boucher has been in a relationship with technology entrepreneur Elon Musk. (…) On January 8, 2020, Boucher announced that she was pregnant with her and Musk’s first child together. Grimes gave birth on May 4, 2020, with Musk announcing via Twitter that both Grimes and their baby were doing well. Boucher and Musk have stated that they named the child as “X Æ A-12” (pronounced “Ex Ash A Twelve”) 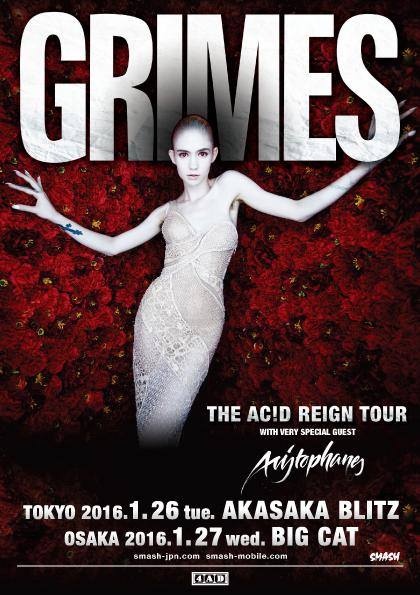 There is no info about Grimes travelling to Tokyo in 2020. The last time she was there — as per internet info — was in January 2016, when she did “The Acid Reign Tour” (yes – you read that right Acid Reign…).

Stranger things have happened – or did they?

Maybe. Elon’s grandfather on his mother’s side, Dr. Joshua Norman Haldeman, was a very versatile person, to say the least. He developed national and international stature as a political economist, provincial and national professional leader, and sportsman/adventurer. “Dr. Haldeman also earned a place in the political history of Canada, owing to his service as research director for Technocracy, Inc. of Canada, his national chairmanship of the Social Credit Party during the second world war, and his unsuccessful bid for the national parliament.”

The basic premise of social credit is that all citizens should be paid a dividend as capital and technology replace labour in production.

The Alberta Social Credit Party changed its name in May 2017 and is now the Pro-Life Alberta Political Association (PAPA), a registered political party in the Canadian province of Alberta (prolifealberta.com).

So, what could possibly be a link between all this?

Social /ˈsəʊʃ(ə)l/
adjective: relating to society or its organization.

Maybe it might be interesting to ‘offer’ undocumented workers and citizens from other countries detained under state and federal law this new cryptocurrency system – just to try things out?

They have nothing to lose – and when the body activity data satisfies one or more conditions set by the cryptocurrency system they can be awarded cryptocurrency.

You know, like social credit, where citizens should be paid a dividend as capital and technology replacing labour in production.

The road to social creeptocurrency indeed… 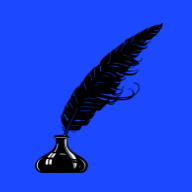 Letters to the Editor

Letters from readers come in from time to time, expressing concerns, asking questions, or offering research on topics covered here at Truth Comes to Light. If writers ask, we honor their anonymity.