The Centers for Disease Control and Prevention (CDC) today released new data showing a total of 1,053,830 reports of adverse events following COVID vaccines were submitted between Dec. 14, 2020, and Jan. 14, 2022, to the Vaccine Adverse Event Reporting System (VAERS). VAERS is the primary government-funded system for reporting adverse vaccine reactions in the U.S. 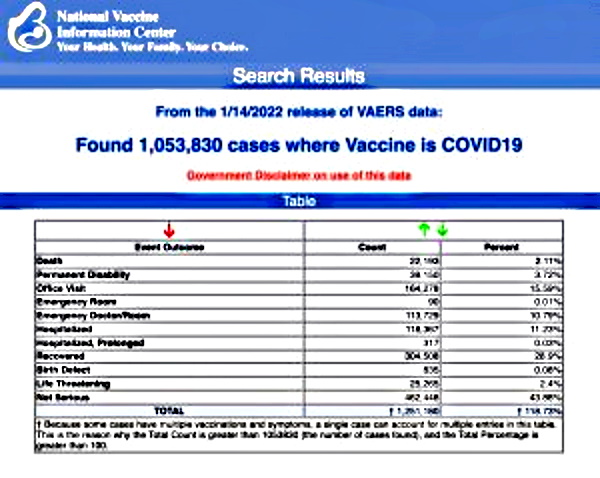 The most recent death involves a 7-year-old girl (VAERS I.D. 1975356) from Minnesota who died 11 days after receiving her first dose of Pfizer’s COVID vaccine when she was found unresponsive by her mother. An autopsy is pending.

Death certificate data from the CDC show excess deaths increased by more than 40% among Americans 18 to 49 years old during a 12-month period ending in October 2021, compared to the same time period in 2018-2019 before the pandemic. COVID caused only about 42% of those deaths.

Death certificate data from CDC show excess deaths increased by more than 40% among Americans 18 to 49 years old during a 12-month period ending in October of 2021, and that COVID caused only about 42% of those deaths.https://t.co/0tX147U6Qs

State-level data for the same 12-month period also show increases. For example, in Nevada, excess deaths were as high as 65%, with COVID accounting for only 36%. The District of Columbia saw an increase of 72% — with COVID not being a factor in any of the deaths.

Increases in excess deaths were most noticeable in the Midwest and western and southern states, while states seeing the lowest increases were primarily from the Northeast.

On Dec. 22, Atcho received a booster because she “didn’t want to struggle with this when the season started” and was told it was safer to get Pfizer — even though she had Moderna the first time — to avoid cardiac side effects.

On Dec. 27, Atcho said she started experiencing tightness in her chest and felt dizzy while walking. A cardiologist diagnosed Atcho with pericarditis — inflammation of the thin membrane that surrounds the heart.

Atcho is not allowed to get her heart rate up for several weeks to allow her heart to rest and heal from the inflammation. Said she is upset nobody talks about the “heavy side-effects” young and healthy people are experiencing after receiving COVID vaccines.

In a letter to the UK’s Joint Committee on Vaccines and Immunisation, more than 30 politicians, doctors and medical experts in immunology asked UK regulators to overhaul the country’s COVID vaccine rollout for 12- to 15-year-olds based on new data showing a high risk of myocarditis in that age group.

They also argued vaccines are less effective “at stemming the transmission of Omicron compared to Delta” and therefore there may be few advantages to exposing young people to the potential increased risks and long-term harm.

Prior COVID infection more protective than vaccination during Delta wave

People with a history of previous COVID infection were better protected against infection and related hospitalization during periods of predominantly Alpha and Delta variant transmission, suggesting natural immunity was more protective against the variants than vaccines, according to the CDC.

New data released Wednesday by the CDC showed people who survived a previous infection had lower rates of COVID than people who were vaccinated alone.

Hospitalization rates were also lower among people who had recovered from COVID than among those who had been vaccinated.

For the study, health officials in California and New York gathered data from May through November 2021, which included the period when the Delta variant was dominant. The agency said there were limitations to the study and results were not applicable to the new Omicron variant.

However, the agency concluded vaccination “remains the safest and primary strategy to prevent SARS-CoV-2 infections, associated complications and onward transmission,” due to the risks associated with COVID infection.

The agency did not compare the risks of infection in those with and without underlying medical conditions and did not analyze the risks associated with vaccinating those with a history of previous COVID infection.

The U.S. Supreme Court’s ruling last week striking down the Biden administration’s vaccine-or-test mandate for private businesses has left many companies scrambling to decide whether they should abandon the mandate or force their employees to be vaccinated anyway while the case plays out in the lower courts.

As The Defender reported today, Starbucks was the first major business to announce it would not enforce its COVID vaccine mandate against employees in light of the Supreme Court’s ruling, while Carhartt CEO Mark Valade announced in an email to staff the company’s vaccine mandate for its 3,000 U.S. employees would remain in place.

Both decisions sparked backlash on social media with calls to boycott both companies.

Meanwhile, a coalition of attorneys general from 27 states is calling on the Occupational Safety and Health Administration to rescind its Emergency Temporary Standard for private businesses with more than 100 employees because it lacks the authority to issue a broad vaccine mandate.