The Crescendo of Chemtrail Awareness – A Breakthrough Issue 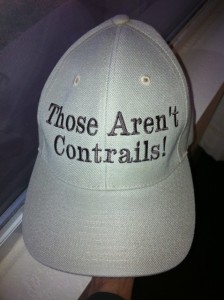 Some big strides have been made recently in chemtrail awareness. Thanks to the efforts of people like Dane Wigington at GeoengineeringWatch.org who has been appearing on dozens of radio shows each month, and approaching civic and environmental groups and regularly contributing eye opening articles to news sites. But there are many others like him, such as the tireless folks like those at aircrap.org and many other sites and blogs. It’s working. We have founding pioneers like Clifford Carnicom at the Carnicom Institute, Will Thomas at WillThomasOnline and Rosalind Peterson at the AgricultureDefenseCoalition and many others to thank as well.

Remember, most of this is more grass roots than anything. Rather than just preaching to ourselves we need to inform those around us, those who do not yet realize the severity of their condition due to these insane geoengineering programs. These planted algae blooms the Navy is experimenting with, which Rosalind Peterson has been screaming about for years, are yet another horrific program destroying our environment.

When you add GMO foods, fluoridated water, deliberately tainted food and then deadly vaccines, a nightmarish reality starts to set in. And we need to be there to help whenever possible to birth people into this new conscious awareness.

Because it stings like a bitch in a B horror film when it first hits.

The Encouraging Crescendo of Chemtrail Consciousness

There are terrific folks who comment on mine and other sites, many of whom take action whenever they can. And they’re seeing results. So am I. And there’s a different tone in the reactions you get lately. Of course you still get the “don’t tell me”, “leave me alone” or “you’re crazy” but it’s not nearly as often.

Something’s changing. The previously frozen paradigm is shifting and it’s time to load explosive charges into the cracks of the matrix and blast away.

Even more than that, there’s a personal sense of being free to boldly proclaim the Truth that we know, whenever and wherever we are.

A Poignant Word From Dane Wigington

I spoke to Dane about this issue of urgency and speaking up and the opening we have. He again is so full of this subject and had this to say:

“Global geoengineering is pushing all life on Earth to the breaking point. We are all standing on the end of the plank, with nowhere to hide. We can remain silent as we are pushed over the edge, or we can turn and take a stand.

On a recent evening I was wandering through the forest which surrounds my home, I heard a single lonely frog sound out. Only a few years ago the sound of singing frogs was deafening in this place, but now it is silent, as most of these miraculous amphibians have succumbed to the fallout from the constant spraying. An initial feeling of overwhelming sadness was quickly overcome by a tsunami of anger and motivation. If this frog could hang on, and not give up, neither could I give up. I studied the trees which surrounded the frog and I,  the massive silent sentient beings, also refusing to give up.

We must all refuse to step off the plank, we must never give up.

There is a great convergence occurring. As the “collective insanity” increases the lethal global aerosol spraying, the “collective consciousness” is awakening by the day. There is a profound stirring of dire concern over the toxic spraying and a rapidly growing motivation to take action against it. Responsible radio hosts from around the globe are seeking information to pass on to their listeners. I have been contacted by a number of prominent scientists from major universities who are now getting up to speed and educating their associates. Public consciousness of the geoengineering issue is getting closer to critical mass by the day.

The planet’s life support systems are being decimated by geoengineering programs, which includes the HAARP facilities. Now the planet is pushing back. All data to date continues to confirm the methane mass release occurring in the Arctic. The climate systems and atmosphere as a whole are being ripped apart. Geoengineering is fueling the climate feedback loops and ozone/atmospheric destruction. We must keep stepping up our pace in regards to exposing these deadly programs.

The Power of Two

I’ve been touting an idea for some time regarding the dynamic of individuals telling others about this dire issue.

If one person shares the geoengineering issue with two others on the first day of the month, and then those two share with two each on the second day, and so on for 30 days, well over 5,000,000 people would be made aware at the end of that time. Pretty profound, yet completely true.

Our efforts matter if we pull together. Its up to all of us and this issue cannot wait until tomorrow. If we bring this issue to light, the rest will fall into place. If those that are carrying out these programs, who are completely unaware of what they are doing to their own children, knew this truth they would refuse to participate. I am told by one of the university scientists that this may already be taking place.

Get educated, spread the word, and take a stand. This issue cannot wait.”

It’s A Matter of Fact – “Silent No More” – Demonstrating Daily

There’s no need to convince anyone. Chemtrails just are and people need to look up and take notice. A simple nudge or sign or mention with careful deft follow up will do it in many cases. I’ve seen it over and over when approaching people. “Ever notice these?” “What do you think they’re doing up there?” or “Do you like your skies engineered?” may eventually hit the conversation. Nothing confrontational, these are sleepers who need awakening.

It’s not an exercise in self justification. A lot of compassion is in order.

Approaching individuals is the ultimate form of demonstration. And perhaps soon our only one in the Orwellian state we all now living in. The point is, just doing a little at a time, wherever we are, discreetly and in love, goes a long, long way. We’re not out to alienate or aggravate, but educate and alleviate… ignorance.

I spoke to a sweet check out lady at Trader Joe’s today. I usually start with a comment about “I like to get more cash back than I paid…besides it’s not real money anyway.” It tests the waters a bit, but I joke around to break the ice first. “The government just prints the stuff when they need it, why can’t we?” and they laugh. It will go any number of directions from there, lately it’s talking about Cyprus and how they’re coming after the people’s private savings, which she didn’t know anything about. Then it went to Italy next, then how they pulled the plug on the EU and US economies on purpose…and she was astounded, saying “I knew it! It all seems so pre-planned!” And off to the races I went. She begged me to stop in to see her next time I come to the store.

After advising her to get her money out of the banks and get food and water, my parting words were “Be strong and do the right thing!” She was on board.

This isn’t uncommon. People are waking up, but they’re not going to get a nudge unless we free agents reach out and do some guerrilla truth warfare. They’re SOOO ready to hear more but not finding the source for it due to the limitations of their prescribed circumstances. Mental prisoners, in other words.

That’s where we come in. All of us, any of us. Us. You. Me. Raise your voice. You don’t need to occupy a park, you don’t need to scream bloody murder at a police line with a placard in your hand. Although there’s a time for that, for sure.

We are the solution- by being who we truly are. Everywhere. And without a shred of fear.

It’s Not Just Chemtrail Consciousness – Truth Is Bustin’ Out All Over!

We’re at the cusp of something so fantastic and wonderful that we think it’s too good to be true. I don’t fully understand it but I know it’s real. Our actions in conscious awareness and spreading the message of Love and Truth without fear are the key to the world to come…i.e. manifesting right before us.

Revel in it and pass the word.

The time is now for open conversation, clear message T-shirts, hats, flyers, calling cards, any form of outright truth. Just make it part of your daily routine. Remember, when you’re long gone, what did YOU do to try to  help avert this horrific world takeover? Your kids and grandkids will either be proud, or ultimately ashamed.

Something to think about.

Live life fully. Tell the truth. Live the Truth to the best of your ability.

We all make a difference, one way or the other.