The world’s largest‐ever international criminal investigation is now under‐way, involving Hammersmith Police, The Metropolitan Police, and The International Criminal Court. The UK police accepted the supporting information and agreed there is enough evidence to proceed under the above crime number.

Requests for further assistance have been made to international lawyer Robert F Kennedy Jnr (nephew of J F Kennedy), Dr Reiner Fuellmich (German corporate lawyer who won the emissions scandal case against Volkswagen Audi), Dr. Michael Yeadon (Former Pfizer Vice President), plus countless other doctors, professors, virologists, biologists, data experts and lawyers nationally and internationally; some of whom have already made direct contact with the police and have been acknowledged by Superintendent Simpson (Assistant to Cressida Dick, Head of The Metropolitan Police).

The evidence submitted by Philip Hyland and Dr Sam White against the UK’s Medicines and Healthcare products Regulatory Agency (MHRA) is damning and shows they did not carry out due diligence surrounding the vaccine data, trials and studies; and that they continued to ignore the death, harm and injury the vaccines cause.

“This is now a live criminal investigation. We were forced to act due to the complacency of the UK Government, despite them being fully aware of the catastrophic death and injury figures to adults and children alike. This is nothing short of genocide; once again it seems that profit over people is the overriding motive. There is a deliberate blanket campaign of misinformation underway. Many don’t even realise that the covid Vaccine is still an experimental product. This is the most far-reaching criminal inquiry ever undertaken. A national scandal that threatens the lives and the livelihoods of every person in the UK. If people want unassailable current evidence, I’d suggest in the interim they look at: ”

“In years to come this will be the equivalent of another Thalidomide scandal, but for now we have to act on a united front to get the truth out to the public and stop the unsafe covid vaccine rollout. We have several thousand pieces of evidence to discredit the safety and efficacy of this vaccine, but we are still encouraging members of the public to contact us to further support our claim. We therefore appeal to anyone who has suffered the death of a loved one following a Covid vaccine and anyone who has been injured by it, e.g. blindness, heart issues, blood clots, stroke, myocarditis etc”.

“We’d also like to hear from those illegally threatened with ‘No jab, no job’”.

We must act now. If you have information to assist the police inquiry, please contact Lois Bayliss of Broad Yorkshire Law: [email protected] 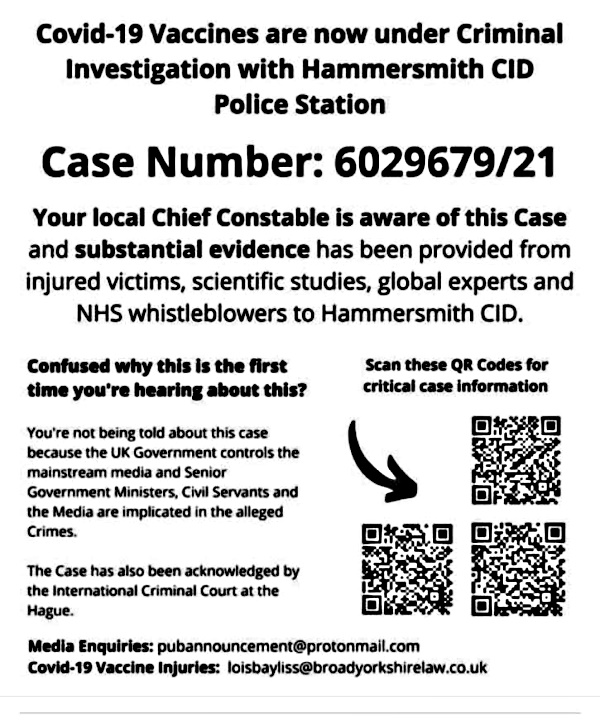