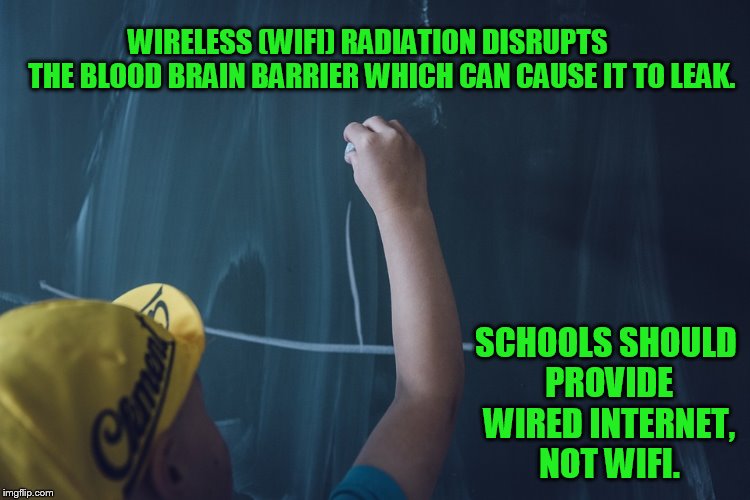 Health experts recommending that WiFi in schools be replaced with wired internet connections (aka Ethernet) is nothing new.  In fact, for many years the American Academy of Pediatrics and other health experts have been warning that children are more vulnerable to all sources of wireless exposure – Bluetooth, cell phone and WiFi radiation – because they are smaller, their skulls are thinner, and their bodies are still developing.  Some schools have already replaced WiFi and more are moving in that direction.

Thanks to Environmental Health Trust for this updated list of where action has and/or is being taken as well as supporting videos:

Worldwide schools and governments are taking action to reduce levels of wireless and electromagnetic radiation in schools. Wireless exposures in schools come from cell phones, Wi-Fi, 5G virtual reality, and nearby cell towers/antennas. In addition, schools now have wireless security and equipment networks that create wireless exposures. Schools also will have magnetic field electromagnetic exposures from the nearby high-voltage powerlines.

In addition to government country wide actions like replacing Wi-Fi with safe wired networks, individual school districts and individual schools are making changes. This page presents only a few of the worldwide policies moving forward. EHT is committed to safe technology in schools and regularly writes and briefs policymakers on the issue.

Research has already determined that wireless exposure can reduce immunity in fighting illnesses as well as cause many other health issues including increased cancer risk.  The Russian Ministry of Health recently advised that families limit children’s exposure during the pandemic.

Unfortunately in the U.S. the Federal Communications Commission (FCC) is promoting more wireless emitting technology even though no “safe” level has yet been scientifically determined for kids or pregnant women.  One FCC commissioner actually encouraged schools to provide WiFi Hot Spots to families so kids can learn in virtual classrooms.

The FCC is supposed to protect the public by regulating the telecom industry.  They were a corrupt agency before Trump was elected and have become much more dangerous since then.  Lawsuits have been filed against them for NOT protecting the public from unsafe levels of wireless radiation (see 1, 2) as well as forced unwanted 5G deployment.