Recently, we tried to cut through the babble about 5G, look at actual data, and figure out how troublesome it really is for aviation. (See Pro Pilot, April 2022, p 8). Since then, the Federal Communications Commission (FCC) has doubled down on blaming its victims, ordering avionics makers to bring their “defective” radar altimeters up to a standard of signal discrimination required in no other country. However, that is not our topic here. This time, we will look at what electromagnetic fields (EMFs) may be doing – not to your equipment, but to you.

The list seems to grow almost daily. This may be significant to pilots. Nina Anderson, a retired corporate pilot who has built a second career as a respected consultant specializing in EMF issues, reports that jet cockpits are the most EMF-dense environments she has ever examined. Every flight instrument and radio contributes its share.

We should note that all findings of a link between EMFs and health are disputed. For every study showing that electromagnetic fields subvert biological systems, scientists funded by the telecommunications industry can provide one to refute it, plus an explanation of why the other research was methodologically flawed or otherwise invalid.

They do so routinely. Anderson has little sympathy for them. A similarity to the tobacco industry may have been mentioned. Nonetheless, since the 1990s, the great preponderance of independent evidence has shown that exposure to EMFs has medical consequences. A lot more supporting data has been added since then.

Nature exposes all life to EMFs. Most forms are weak, and distributed over a wide range of frequencies. The sun’s ultraviolet light causes burns and skin cancers, and contributes to skin aging.

As far as we know, natural EMFs are otherwise harmless. Technology is different. The EMFs our artifacts create are stronger than most natural fields, and we marinate in them 24/7. Their frequencies are often well suited to couple with biological processes. They’re also polarized, where natural EMFs are not.

This can greatly amplify their biological effects. EMF sources abound in our homes and workplaces – even on the street. Wi-Fi, Bluetooth devices, computers, microwave ovens, “smart” electric meters, and the inverters that turn DC electricity from solar panels to 120V AC, all generate EMFs at varying frequencies and power.

A single fluorescent light can add high-frequency voltage spikes to electricity that arrived “clean.” Turn off all these devices, and we still would receive EMFs from our neighbors – especially in apartments – and when passing cellphone towers. In the years ahead, we will experience even more EMFs.

Devices connected to the “Internet of things” pass data and control signals back and forth wirelessly almost constantly. Estimates vary, but they could be 30 to 50 billion of them by 2025. In time, their “electrosmog” will fill the air as London’s pea-soup fogs did in the age of coal. 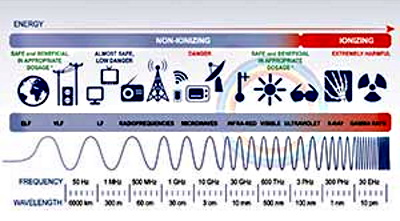 Cellphones are a particular concern because they broadcast next to our ears at frequencies that in recent generations can extend into the microwave range. And in all but the most rural areas, tower transmissions are with us always. Each new generation of phones carries more data faster than the last by transmitting at higher frequencies.

4G phones, for example, operate at 2.5 GHz microwave frequencies. 5G extends to 39 GHz. And generations up to 8G are already under development. The good news is that the electrical component of high-frequency EMFs penetrates barely 1 mm into the body.

The bad is that it couples to biological processes much more efficiently than phone transmissions used to, and nothing keeps their magnetic component at bay. There is more. Buildings block 5G signals, so many more transmitters are needed to serve an urban area. They also use beam forming to aim all their power in one direction rather than omnidirectionally, as previous cell technologies have done.

Standing in a 5G beam at a given distance subjects us to much more powerful electromagnetic radiation than 4G did – and, because there are more transmitters, we have more opportunity for exposure. Telecoms point out that no one has ever shown that 5G transmissions harm human health, and this is true.

The technology is so new that no one has had time to carry out the necessary studies. Yet, even for 4G, the data is compelling. As long ago as 2009, neurosurgeon Vini G Khurana at the Australian National University, and colleagues in Australia, Austria, and Sweden, reviewed long-term epidemiologic studies of cell phones and brain cancer.

They found that using a cell phone for 10 years or more doubled the risk of glioma and acoustic neuroma, but only on the side of the head where users held their phones. In Malta, researchers studied the incidence of glioblastoma multiforme, the rare brain cancer scientists have long suspected might be linked to the use of cell phones.

From 2008 through 2017, the number of people who had used cell phones for 10 years or more, when excess cancers are considered most likely to appear, was rising fast. Medical records showed an obvious trend. In 2008, there were only 0.73 cases per 100,000 population.

Ten years later, there were 4.49 per 100,000. Something might have caused this other than the growing use of cell phones, but no credible alternative has been suggested. Moreover, researchers at the Yale School of Public Health reported in 2020 on genetic variations that predispose people to develop thyroid cancer.

Heavy cell phone use more than doubled the risk of thyroid cancer in those with any of four such variations. Professional critics can find ways to trash any inconvenient research. For the rest of us, the picture should be clear.

EMFs can affect us in ways that are especially important in the air. Known effects that appear within the duration of an average flight include fatigue, irritability, an inability to concentrate, and mild cognitive impairment resulting in task saturation, mistaken priorities, complacency, and spatial disorientation. Between 1993 and 2013, US Air Force pilots were involved in 72 severe accidents attributed to spatial disorientation.

The incidents resulted in 101 deaths and 65 aircraft lost. The possibility that electromagnetic fields were to blame concerned the Defense Advanced Research Projects Agency (DARPA) enough that in October 2020 it initiated a 2-year project called Impact of Cockpit Electro-Magnetics on Aircrew Neurology (ICEMAN).

Read the rest of this article here