THE WORLD, accustomed to blaming every illness on a bacterium or virus, has been ignoring the enemy that we have invited in and mistaken for a friend. The evidence is mounting, not only that it is futile to try to hide from a microscopic gene sequence that has already flooded the earth, over which we have no control, but that the illnesses that are being blamed on that virus, and which rightly terrify us, are in part caused by an enemy that we ourselves have created, and that we have refused to recognize as the mortal threat that it is.

Viruses are constituent elements of life on Earth. Microwave radiation is foreign and lethal to life on Earth. It is time that humanity recognizes these facts.

On February 3, 2020, the Diamond Princess cruise ship was quarantined in Yokohama, Japan after a passenger had tested positive for COVID-19. Ultimately, 381 passengers and crew members became sick, and 14 died. It later emerged that COVID-19 had probably spread throughout the ship before the quarantine began. The quarantine — on the ship as in the rest of society — was a futile attempt to control the uncontrollable, like plugging up a hole in a dam, or a thousand or a million holes, while most of the water is actually washing over the dam and flooding on top of us.

On February 3, 2020, the same day the Diamond Princess was quarantined, the satellite company SES put out a press release advertising “the best WiFi at sea” and announcing that Princess Cruises would be using a “hybrid medium earth orbit (MEO) and geostationary (GEO) network” to become “the first cruise ships to access SES’s ground-breaking O3b mPOWER satellite-based communications system.”

mPOWER uses beam-forming technology and frequencies from 17 to 30 GHz and SES boasts that its satellite system is part of the global 5G network. “We offer the fastest wifi on the high seas making it easier for you to stream movies, stay connected on social media and even text with friends and family on board with you!” advertises Princess Cruises. Each Princess ship has 7,000 sensors, 650 wall-mounted touchscreen devices, 1,780 WiFi access points, 4,030 digital displays in private rooms, and 75 miles of cable. The antennas on the ships that communicate with the satellites are huge globes that look like this: 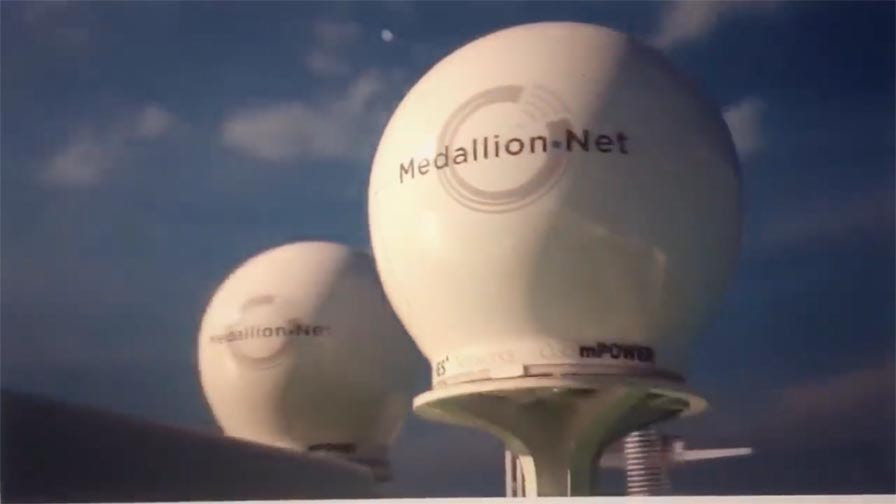 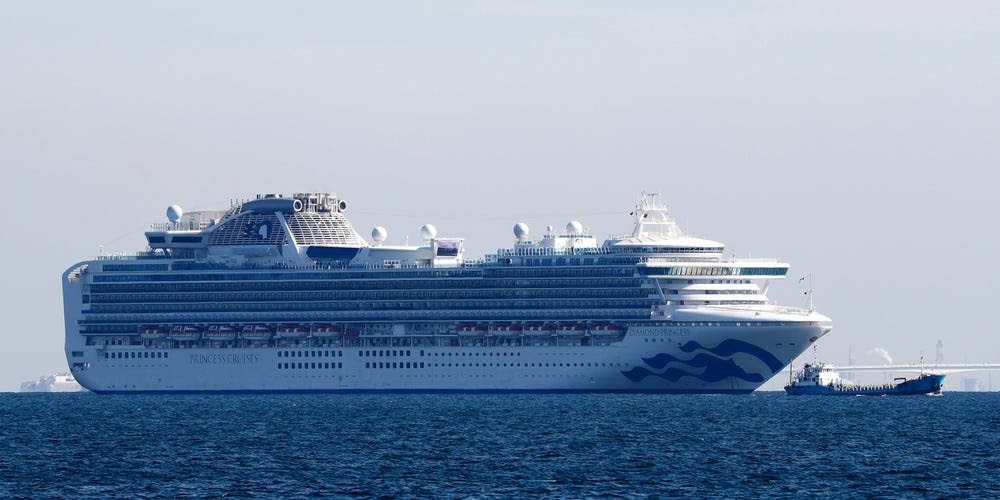 “A previously unidentifed disease is currently threatening blue tits, great tits and other small songbirds across Germany,” reported the Germany conservation organization NABU. The first cases were reported on March 11, 2020, and by April 21 the number of reported sick and dead birds was around 26,000. Although this disease is being blamed on a bacterium, its resemblance to COVID-19 cannot be avoided. The birds are being described as “apathetic birds with breathing problems.” They cannot eat, appear to be “unquenchably thirsty,” and then die. Extreme thirst is a widely-reported effect of microwave radiation. It is also widely reported in cases of COVID-19.

Absurdly, NABU is telling people to stop providing feeding stations and water sources in order to enforce “social distancing” for birds. NABU has published a map of German regions showing the number of reported tit deaths per 100,000 inhabitants: 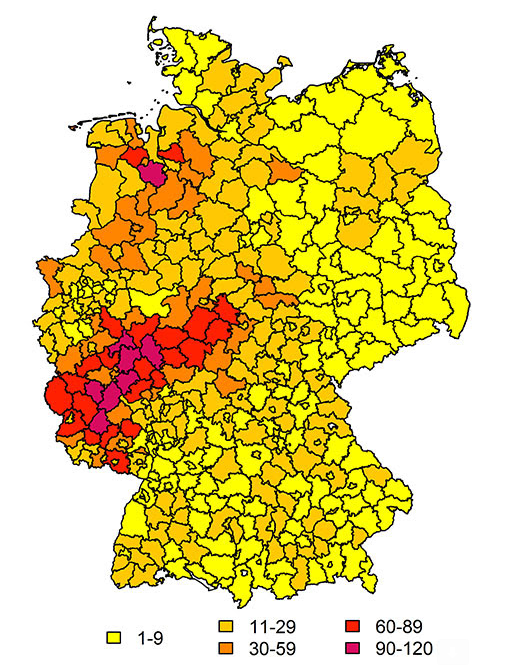 The highest number of bird deaths is occurring along the Mosel River and in the region around Oldenburg in Lower Saxony. These are areas where Vodafone announced in a press release on April 10, 2020 that it had just expanded its 4G-LTE cell tower network. Vodafone sqaid it had closed “one of the nastiest radio holes” in Lower Saxony, and there had previously only been 2G service along the Mosel River. “The company has implemented more than 1,000 LTE projects in the past few months,” said Vodafone, and is increasing the power of 500 existing LTE stations and upgrading 260 more stations to 4G-LTE.

We have been told that COVID-19 is a serious disease mainly in the elderly, and that it does not affect young children. Now, however, an unknown disease is being described in children in the United Kingdom, Spain, Italy and the United States and since many of them are testing positive for COVID-19, it is being blamed on that virus — despite the fact that other children with the new disease have tested negative for the virus.

Children are appearing with “multi-system inflammation with flu-like symptoms,” and “with blood parameters consistent with severe COVID-19.” The children may be agitated, confused, have severe difficulty breathing, have seizures, low blood pressure, inflammation of the heart, abdominal pain, skin rash and, especially in teenage boys, testicular pain. The disease is being called a variant of either toxic shock syndrome or Kawasaki disease. But the symptoms are all classic effects of radio wave sickness.

AN OCEAN OF VIRUSES

The idea that we can keep from sharing viruses by wearing masks and staying a few feet away from each other is about as realistic as putting a mask on a fish and pretending it is going to protect it from getting wet. Viruses are nothing but pieces of genetic material that constitute the basis of life itself. It is coming to be understood that there is an ocean of bacteria and viruses that circulate in the atmosphere and travel on high-altitude winds around the world and between continents. And that the viruses far outnumber the bacteria.

It has long been a mystery how, from one season to the next, an old strain of the influenza virus can be replaced by a new strain, at the same time all over the world. This is now being explained. A team of Canadian scientists, in a paper about influenza, observed that viral particles may be transported hundreds or thousands of kilometers before returning to the ground and that “the Far East may be a source of wintertime influenza viral aerosols that reach North America a week or two after they are emitted into the atmosphere… Thus, the entire population of the world may become exposed to airborne influenza virus. This may help to explain the ubiquity and persistence of this disease.”

This could also explain how sailors on the Navy ship, USS Kidd, could have contracted the coronavirus after more than a month at sea without any contact with land. The ship left Pearl Harbor on March 20, 2020, and the first sailor started showing symptoms of the disease on April 22. Subsequently the ship was quarantined in San Diego, where 64 sailors tested positive for COVID-19.

But viruses are much more than vectors of disease.

Viruses, wrote an international team of scientists in a paper published in 2018, “encompass much of the biological diversity on the planet.” There are an estimated 1030 (a million trillion trillion) virus particles in the oceans alone. To determine the number of viruses circulating high in the atmosphere, these authors established two collection stations in the Sierra Nevada Mountains of Spain, and counted viruses. They found, at those locations, that between 0.3 billion and 7 billion virus particles per day were falling out of the air onto every square meter of land, originating from both land and ocean sources far away.

“The daily deposition rates of viruses associated with aerosols <0.7 µm in size explains observations that identical viral sequences occur at geographically distant locations and in very different environments,” wrote these authors. They also found evidence that “bacteria and viruses can remain viable after atmospheric transport… Rather than being a negative consequence, this deposition provides a seed bank that should allow ecosystems to rapidly adapt to environmental changes.”

“Viruses,” wrote a pair of scientists from San Diego State University (“Here a virus, there a virus, everywhere the same virus?”), “are ubiquitous, abundant and ecologically important in the environment.”

Those who are telling us to stay home, wear masks and practice social distancing have a myopic, extremely limited, and wrong understanding of viruses, their function in the world, and how they circulate. The COVID-19 virus is already circulating on the wind, everywhere in the world. Masks, disinfectants, social distancing, and staying home accomplish nothing. As more than one doctor has observed, it is rational to quarantine the sick, but irrational to quarantine the healthy.