[Below you will find CJ Hopkin’s introduction to the series. You can find him at his substack or website. His post was written prior to the release of the film (Part 1). Follow OvalMedia in English on Odysee or their website. Catherine Austin Fitts can be found at Solari.]

Referenced in the video:

Narco-Dollars for Beginners: “How the Money Works” in the Illicit Drug Trade by Catherine Austin Fitts

We Need to Talk About Mr. Global

So, almost exactly a year ago, I hopped into a van with a German film crew and drove to a little fishing village in The Netherlands to talk with Catherine Austin Fitts about what I call “GloboCap” and she calls “Mr. Global,” and the rollout of the New Normal, and the Going Direct Reset, and propaganda, and totalitarianism, and the Federal Reserve System, and God, and other things like that.

Our talks turned into a four-part series, We Need to Talk About Mr. Global, the first part of which is being released today … today being Sunday, August 28.

The series is produced by OVALmedia, the honcho of which is Robert Cibis, who has been producing and directing documentaries and interviews, organizing roundtables of experts and analysts, and trying to get the facts out to the public in an incredibly fact-unfriendly environment for the better part of two and a half years now. If you’ve been following my newsletters and Consent Factory columns, you have a sense of the oppressive atmosphere here in Germany, the censorship, financial threats, and so on. For example, in July, YouTube deplatformed OVALmedia’s popular German, English, French, and Italian channels.

So it goes these days in the New Normal Reich.

Anyway, Part One of the Mr. Global series will be available on OVALmedia’s website and on Odysee at 8:15PM CET (and thereafter, in case you can’t tune in tonight).

German versions will also be available on the OVALmedia and Odysee sites.

Parts Two, Three, and Four are still being polished and are scheduled to be released during September and October. I’ll let you know when the dates are announced.

In the meantime, I hope you enjoy Part One, which was shot on an old Dutch fishing vessel cruising around the IJsselmeer. Catherine and I didn’t do any fishing. Part One is mostly an introduction. We were exploring the question of how we got here … all of us, the world, and Catherine and I, personally.

You have to admit, it’s a little weird that a former Assistant Secretary of Housing and Urban Development in the George H.W. Bush administration and serious Wall Street player like Catherine and a scruffy itinerant Lefty author like me would end up on an old Dutch trawler together sharing our thoughts about “Mr. Global,” or “GloboCap,” or whatever you prefer to call the unaccountable, supranational, multiplicitous, non-governmental governing entity, or network of entities, or ideology, or whatever it is that is actually driving events in our increasingly dystopian era.

All right, enough said. Watch Part One. Here’s a teaser (click on the picture) … 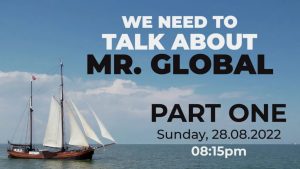