Dr. David Martin’s Lawsuit Against Biden: “The COVID Injection Is a Bioweapon”

Dr. David Martin’s Lawsuit Against Biden: “The COVID Injection Is a Bioweapon”

Dr. David Martin recently filed the first in a series of lawsuits in Federal Court “to get the truth out” about COVID-19 gene therapy injections and “take back America from the COVID pandemic scare.” In what he calls a “multi-step process,” Martin explains the first lawsuit will put into the public record “that the COVID vaccine is not a vaccine.” Instead, Martin explains the Injections are experimental gene therapies “known to kill people, known to actually stay inside of the human body for over 60 days producing pathogens that are scheduled toxins.”

The lawsuit, Griner v. Biden et al., was filed on Mar. 4, 2022, in the U.S. District Court in Utah on behalf of Devan Griner, MD, a double-board certified surgeon and widely published author who has transformed the lives of hundreds of children in Utah and beyond. Besides naming Joe Biden, defendants include Xavier Becerra of the U.S. Department of Health and Human Services (HHS), as well as the Centers for Medicare and Medicaid Services (CMS) and its leaders. 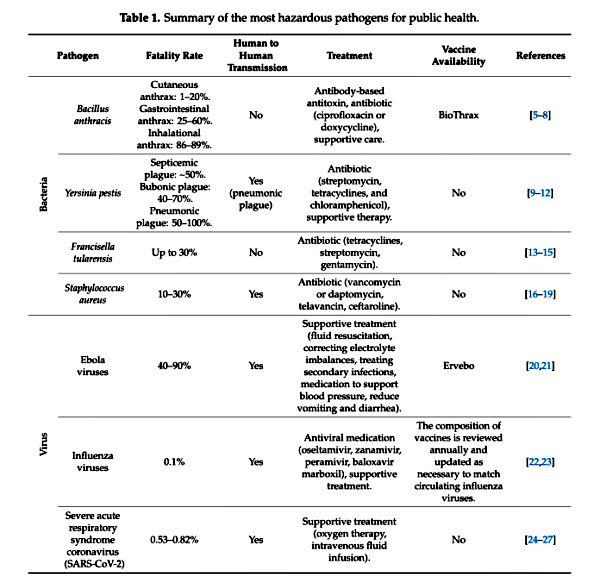 Screenshot / NIH Summary of the most hazardous pathogens for public health.

Martin maintains we need to stop forcing and bribing people to get the shot, stating, “Those are illegal acts in the United States and cannot be done.” Martin explains that the first lawsuit is in part litigation for discovery—revealing the criminal conspiracy Martin has talked about for years—as much as it is a litigation for the facts, as both are equally important. Martin is confident the disclosures that will have to be filed by the Federal Government in response to the first case “are, in fact, going to be incriminating for our next case.” Looking forward to obtaining evidence of the felony, Martin explained:

Martin, who indicated that Utah is the perfect jurisdiction to begin his campaign, pointed out that when a term like “vaccination” is used, the public believes they are getting something that will keep them from getting sick or transmitting sickness. Instead, Martin asserts that after receiving the COVID-19 injection(s), individuals turn into a biological weapons factory. Explaining further, he declares:

“And [vaccination] is actually defined in the statute exactly that it’s the ability to put something into the body that stimulates the immune system. It turns out that the mRNA that’s being injected into people is not that. In fact, specifically, what it does is take a little computer-simulated strand of mRNA, it sends it into the body, and the body becomes a biological weapons factory. It manufacturers spike proteins. The injection does not stimulate any immunity.

The 32-page lawsuit, with 171 pages of Exhibits, begins by highlighting that the CMS mandate requires almost every employee of any healthcare facility receiving Medicaid or Medicaid funding to “receive one of the three Injections authorized for emergency use by the Food and Drug Administration as COVID-19 vaccines (the “Injections”).”

CMS Mandate Must Be Struck Down

The suit further explains that Plaintiff, Dr. Griner—who has natural immunity and refuses to take one of the injections—is a “highly skilled and well-known plastic surgeon licensed to practice in Utah whose passion is healing children who suffer from cleft palates and other congenital defects.” The doctor has traveled the world on more than twenty medical missions, donating his time to help unfortunate children. However, the lawsuit asserts that the CMS Mandate prevents Dr. Griner from continuing to heal children—unless he takes one of the Injections. Noting that Dr. Griner enjoys robust and durable natural immunity after having recovered from COVID-19, the lawsuit explains:

Dr. Griner is subject to the CMS Mandate because the hospitals in which he has the right to practice receive CMS funding. Thus, Dr. Griner must choose not just between his “job and the jab,” as the Fifth Circuit has phrased it, he must also choose between pursuing his passion for healing children with congenital defects and taking the Injection. This despite the fact that the only justification for forcing Dr. Griner to take the injection is the assertion that doing so will prevent Dr. Griner from transmitting SARS-CoV-2 to his patients and other health care workers with whom he comes in contact, something the CDC readily admits the Injection simply does not do.

The lawsuit insists the CMS Mandate must be “struck down” because overwhelming evidence—along with admission by the CDC Director—shows that the injections do not prevent transmission, infection, or reinfection in those who receive them. And despite the windfall profits being made by the big pharma giants making the Injections, the CDC has admitted that both the “vaccinated” and “unvaccinated” are equally likely to spread COVID-19.

Regardless of CDC Definition Change, Injections Are Treatments, Not Vaccines

Furthermore, the lawsuit states the Injections fail to confer immunity “but are claimed to reduce the severity of symptoms experienced by those infected by SARS-CoV-2.” With this in mind, Plaintiff argues the shots are instead treatments and not vaccines, as that term has already been defined in the law. Displaying the CDC’s changing narrative connected to COVID “vaccines” in the brief, and the fact the CMS Mandate rests squarely on the basis that the Injection prevents transmission, the suit reveals:

In fact, the CDC has actually changed its definitions of “vaccine” and “vaccination” so that the Injections would fit within the new definition. Until recently, the Centers for Disease Control defined a “Vaccine” as: “A product that stimulates a person’s immune system to produce immunity to a specific disease, protecting the person from that disease.

The CDC also previously defined “Vaccination” as: “The act of introducing a vaccine into the body to produce immunity to a specific disease.”

Both prior definitions fit the common understanding of those terms. To be vaccinated meant that the recipient should have lasting, robust immunity to the disease targeted by the vaccine.

Thus, the CDC has eliminated the word “immunity” from its definitions of “Vaccine” and “Vaccination.” Upon information and belief, the CDC did so because it recognizes that the Injections do not produce immunity to the disease known as COVID-19.

This is a critical factual and legal distinction. The Supreme Court has long held that the right to refuse medical treatment is a fundamental human right. Since the Injections do not stop the transmission of SARS-CoV-2, as a matter of fact, they are not “vaccines” as a matter of law. Instead, they are a therapeutic or medical treatment which Dr. Griner has the fundamental human right to refuse.

In great detail, the lawsuit expands on the conviction held by numerous experts that the Injections are treatments, not vaccines. The claim reminds us that the FDA categorizes the shots as “CBER-Regulated Biologics,” otherwise known as “therapeutics,” which falls under the “Coronavirus Treatment Acceleration Program.”

Indeed, among the eight professional examples offered in the suit to corroborate that the Injections do not create an immunity that prevents the transmission of COVID-19 to others, the case quoted NIAID Director Dr. Anthony Fauci’s declaration to NPR on July 27, 2021, when he stated, “We know now as a fact that [vaccinated people with COVID-19] are capable of transmitting the infection to someone else.” Additionally, the head of the Oxford vaccine team Professor Sir Andrew Pollard, is quoted in the case as saying on Oct. 8, 2021:

“We don’t have anything that will stop transmission, so I think we are in a situation where herd immunity is not a possibility, and I suspect the virus will throw up a new variant that is even better at infecting vaccinated individuals.”

Furthermore, Plaintiff declares that with rapidly waning effects, the Injections are not “vaccines,” but are instead “gene therapy medical devices” and should be appropriately classified as such. As illustrated in the screenshot below, Moderna (Pfizer uses the same technology) recognizes that its mRNA platform is not a vaccine. Instead, it is “gene therapy in the form of biological “software” developed to genetically “hack” the machinery of human cells to construct a specific protein. 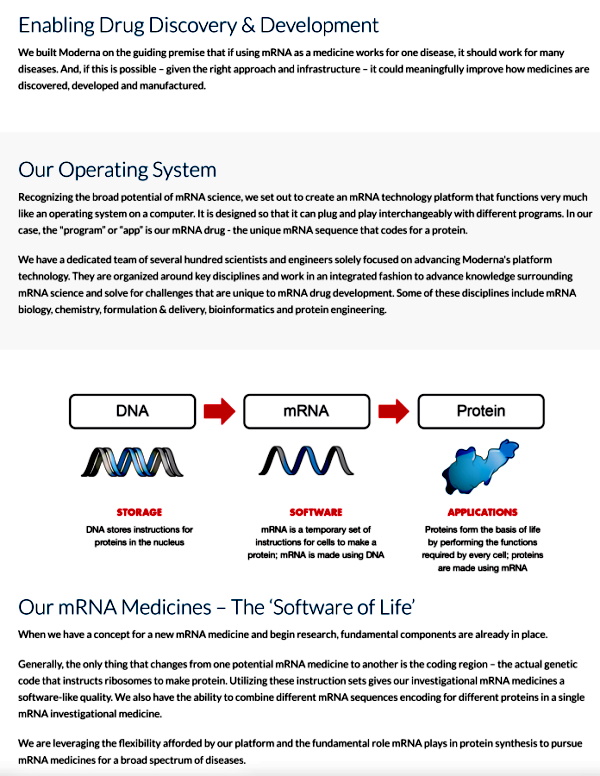 According to a June 01, 2021, bio-distribution study from the Japanese Regulator Agency, the spike protein of the “…coronavirus gets into the blood where it circulates for several days post-vaccination…” and that it concentrates “…in spleen, liver, adrenals, and ovaries in high concentrations…”

Causes of Action As Campaign Gets Underway

The lawsuit lays out three Causes of Action against Defendants, the first being the “Violation of Fifth and Fourteenth Amendment Substantive Due Process.” According to Plaintiff, the CMS Mandates violates the liberty protected by the Fifth and Fourteenth Amendments to the Constitution, including “rights of personal autonomy, self-determination, bodily integrity and the right to reject medical treatment.” With no compelling interest available to Defendants to prove the necessity of mandating the shots, Plaintiff again reminds that the Injections “are simply ineffective against the current variant” and were only somewhat effective against the original SARS-CoV-2 strain.

The Second Cause of Action explains Defendant’s Violation of the Fifth and Fourteenth Amendments related to the Equal Protection Clause, which “prohibits classifications that affect some groups of citizens differently than others.” By creating two classes of healthcare workers—the injected and uninjected—the CMS Mandate dictates the members of one class (the uninjected) get terminated. These unvaccinated employees cannot advance their careers, provide for their families, or pay their mortgages. On the other hand, the injected get to keep their jobs, advance their careers, and pay their bills. Yet, the situations of these two classes are indistinguishable because vaccinated healthcare workers can become infected and reinfected with SARS-CoV-2 and can transmit the disease to fellow workers, patients, and visitors. The lawsuit asserts:

Discriminating against the uninjected controverts the goals of the Equal Protection Clause—i.e., to abolish barriers presenting unreasonable obstacles to advancement on the basis of individual merit.

Pursuant to the Fifth and Fourteenth Amendments, Plaintiff is entitled to temporary, preliminary, and permanent injunctive relief restraining Defendants from enforcing the CMS Mandate.

With the filing of Griner v. Biden, Dr. Martin’s campaign to expose the illegal corruption behind the pandemic “vaccine” narrative is underway. Emphatically, Martin states that without hesitation, the vaccine needs to be called what it is—a gene therapy injection. Noting a desperate need for “truth in advertising,” he explains:

“If we start calling [the “vaccine”] the “gene therapy injection,” a lot less people will roll up their sleeves—and roll up the sleeves of their children—to actually get the shot. And by the way, if you decide to roll up your own sleeve for an experimental gene therapy, have at it, I don’t care. What I do care about is forcing other people to do it, and coercing other people to do it. And holding their jobs or their livelihoods at gunpoint to get them to do it.”

Report a Medical Injury or Discrimination Because of the Jab