Dr. Michelle Perro to Fellow Pediatricians: ‘Rise Up, Take a Stance’ Against COVID Vaccines for Kids

Dr. Michelle Perro to Fellow Pediatricians: ‘Rise Up, Take a Stance’ Against COVID Vaccines for Kids

In The Defender’s “Leading the Charge for Change” interview series, Dr. Michelle Perro explains why she advises parents not to give their kids the COVID vaccine and encourages other physicians to speak out against the vaccines. 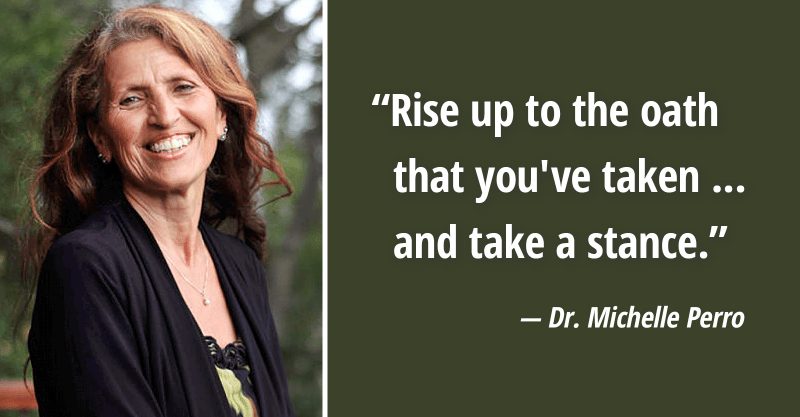 Dr. Michelle Perro, a pediatric emergency doctor, has some COVID-19 vaccine advice for parents: “Don’t do it.”

She also has some strong words for fellow physicians: Have the courage to speak out on behalf of the vulnerable.

In an interview with The Defender, Perro said in her experience treating children with COVID, the disease has been mild.

“In a practice where I work, out of six practitioners, not one of us has seen an extremely sick kid with COVID. Some children have had fevers and body aches, although most have super mild symptoms. We have seen asymptomatic kids and others having mild flu-like illness — at the worst.”

She said the disease is not dangerous in children, often lasting only one or two days.

“It’s in the literature that this is a mild illness in young people,” Perro said. “And the rate of morbidity and mortality is next to zero — a more benign course than the flu.”

For children she has treated with COVID, Perro said she supports their “naturally vigorous immune system,” emphasizing the importance of eating nutrient-dense organic foods along with supplements including vitamins C and D, zinc and quercetin.

“Depending on how sick they are, I also use a range of nutraceutical and homeopathic remedies to also help clear the virus from the mouth and the nasopharynx,” she said.

When COVID vaccines were made available for children, Perro initially gave cautious advice, but she’s since become more adamant in discouraging parents.

“It’s experimental and the potential effects may be irreversible,” Perro said. “We have no idea what it does to your kids’ DNA. Don’t do it — I just said that to some parents this week.”

When her practice, which offers the vaccine, asked her to create a protocol for parents who want to vaccinate their kids, she was reluctant “because they just shouldn’t do it.”

Perro has heard from parents who regret having their children vaccinated.

“I get emails every day with parents having vaccine remorse,” Perro said. “These are not just about kids who are having side effects, but parents who don’t feel right about what they’ve done. And it’s a challenging and new territory when trying to help them — how do I reverse the effects of an mRNA jab?”

For children she sees who are suffering from COVID vaccine injuries, her observations are striking.

“Clinically, we’re seeing mild to severe reactions from this inoculation, but what is mindblowing for me are the cases with adverse outcomes reported in the [Centers for Disease Control and Prevention’s Vaccine Adverse Event Reporting System] data — it’s horrific,” she said. “If you pair that with the injured kids in the clinic, with adverse reactions to the inoculation, that should be enough to say stop, reevaluate, reverse direction.”

Perro said she is particularly concerned about the severe vaccine injuries children are experiencing.

“When I looked at the initial Moderna study, 72% of their vaccine recipients had a reaction that they had graded as mild, moderate or severe,” Perro said. “The most damaging were cardiac and neurological. Now, fast forward to what’s happening to children. What am I mostly seeing? Cardiac and neurological symptoms, just like in the study,” she said.

The increase in myocarditis is a historical anomaly, Perro said.

“As an ER doctor, a pediatric emergency physician, it was so rare pre-COVID inoculations to ever see a kid with myocarditis. In my career of 40 years with acute care medicine — working in big centers in East Harlem, Bellevue and Oakland Children’s Hospital — maybe I’ve seen one or two cases of pediatric myocarditis. That’s two children in more than four decades — and their condition was the result of an infection.”

With increasing cases of vaccine-induced heart problems in children, emergency defibrillators are being placed in schools. “They’re preparing for a wave of myocarditis symptoms and the potential for cardiac complications,” Perro told The Defender.

When asked about those risks, she described how inflammation of the outer envelope of the heart, the pericardium, and heart cells generally can cause anything from chest pain to arrhythmias and tachycardia. She has seen children just after COVID vaccination with increased heart rate and chest pain.

“These myocardial cells, once they’ve been injured, can’t regenerate, the scars remain,” she said. “And these scars in their heart tissue can precipitate arrhythmias in the future since the electrical impulses have reduced conductivity — it’s a devastating disease.”

Neurological effects of the COVID vaccine on children present further risks of an unknown outcome.

“We have no idea of the long-term effects of the spike protein in small children,” Perro said. “What is concerning is increasing the burden of neurologic disease on an already neurologically compromised population.”

Pointing out that 1 in 33 kids are now diagnosed with autism spectrum disorder, Perro said one of the features of this disorder is brain inflammation with activation of their microglia — a critical component of immune response in the central nervous system.

“The spike protein acts like a bioweapon — a toxic material that can cross the blood-brain barrier,” Perro said. “There’s no way we can tell parents what’s going to develop in their kids’ brains when that happens.”

Pediatricians must ‘rise up’ to the oath they’ve taken

With data showing children have an extremely low risk of complications from the COVID virus, and her own clinical experience, Perro openly discusses what pediatricians see, but rarely speak about.

“Young children are at no great risk and do not give COVID to adults,” she said. “So the idea that we inoculate children to stop spreading the disease in adults is wrong and immoral. And it’s well-known these inoculations do nothing to stop transmission.”

Perro is not afraid to speak out about the failure of the vaccines. She said:

“We have people getting their third and fourth boosters, and variants are still ripping through communities. Mostly, those who are transmitting the virus are the vaccinated. Although this is verifiable and quite shocking, most doctors are rolling along with it. There is pressure from all areas, including medical boards to conform. Here in California, doctors are living in a climate of fear from retribution if they voice their concerns.

“It is not just a moral obligation. It’s about our oath as physicians. More pediatricians need to speak out.”

She is very clear on why her colleagues should be more vocal. “I feel that if I know something and I don’t speak out, I am complicit and part of the problem,” Perro said. “How could I look at myself in the mirror? How could I live with myself — why am I a pediatrician?”

Perro told The Defender it’s okay for physicians to be fearful — that fear can accompany altruism.

“Yes, you can be fearful, but still show the courage to speak out on behalf of the vulnerable — those who we’ve been entrusted to care for,” Perro explained. “I say to those who know but are silent, rise up to the oath that you’ve taken, allow your fear to march on with your courage — and take a stance.”

In addition to advocating on behalf of children, Perro said the time has come to fully embrace a holistic system.

“This present medical paradigm can’t be fixed,” she said. “We need to create a new specialty of regenerative healthcare, an eco-medicine, where food sustains or reinvigorates our innate vitality.”

However, she warned, “If we keep taking these jabs, we will create a population that is only more dependent on a broken medical system.”

Perro, co-author of “What’s Making Our Children Sick?” and co-founder of GMOscience.org, has long been an advocate for integrative holistic treatment.

She also believes in empowering parents by providing them with the simple tools to help the body heal itself.

“We need to turn away from a pharma-driven narrative to a food-based narrative, supplemented with healing herbs and spices,” Perro said. “The driving principle of good healthcare is simple — the best medicine is food as medicine.”

Asked about her hope for the future, Perro said:

“A paradigm shift is happening. We must continue to re-establish natural priorities and good health, with supportive communities, where physicians, farmers, scientists and activists work together with a common focus on holistic health principles.”

David Marks is a fellow for The Defender. He is an investigative reporter and documentary producer. His new book, “The Way,” is an interpretation of the Chinese classic, the Tao Te Ching, available at LaoTzu-TheWay.org.

The views and opinions expressed in this article are those of the authors and do not necessarily reflect the views of Children’s Health Defense.