In the last decade or so, controversies and wild speculations have swirled online around Grand Canyon National Park and a newspaper article published by the Arizona Gazette on April, 5 th 1909. The headlines read: “EXPLORATIONS IN THE GRAND CANYON/ Mysteries of Immense Rich Cavern Being Brought to Light / JORDAN IS ENTHUSED/ Remarkable Finds Indicate Ancient People Migrated From Orient.” The Grand Canyon controversy is revealing in many ways and also disturbing in other ways.

The Grand Canyon article explains that an explorer named G. E. Kincaid had made the initial discovery and was joined by the Smithsonian scientist S. A. Jordan to study what was described as a wonderous labyrinthian honeycomb of man-made tunnels filled with seemingly Eastern treasures of golden urns, sophisticated copper tools, ancient artifacts, hieroglyphs, mummified remains, and statues whose iconography resembled those common to Hindu and or Egyptian cultures. “If their theories are born out by the tablets engraved with hieroglyphics, the mystery of the prehistoric peoples of North America, their ancient arts, who they were and whence they came, will be solved. Egypt and the Nile, and Arizona and the Colorado will be linked by a historical chain running back to ages which will stagger the wildest fancy of the fictionist.”

Was The 1909 Grand Canyon Article A Fabrication?

Modern day sceptical writers, academics, and the Smithsonian claim that this story is simply a piece of sensational yellow journalism . They insist it is a pure fabrication from top to bottom that preys on the spiritual yearnings of a gullible and superstitious public. On its surface, the article does appear improbable at best, and, at worst, a dishonest printing of fanciful tales to conjure up profits. The original author of the piece is anonymous which does a disservice to either the believer and the sceptic camps, and there never was a follow up article.

The Smithsonian has publicly denied the story outright (over a hundred years later) and denied any records verifying the existence of Kincaid or Professor Jordan. “The story also asserts that a Smithsonian archaeologist named S. A. Jordan returned with Kincaid to investigate the site. However, the Arizona Gazette appears to have been the only newspaper ever to have published the story. No records can confirm the existence of either Kincaid or Jordan.” Naturally, the academic community toes the party line without question.

Alternative researchers clamour online, insisting this is an elaborate cover-up. They claim that there does exist a “forbidden zone” within Grand Canyon National Park which completely forbids anyone to hike, camp, or explore there. They also point to the curious names of the landmarks in this allegedly off-limits area, and they even go so far as to suggest that shadowy branches of the Federal Government secretly monitor the entire area.

In the more extremist alternative factions, this is only the tip of the proverbial iceberg as they expand the scope into a complex conspiracy of subterranean reptilian overlords that manipulate the ruling elite class . The sceptical position is heavily fortified behind obtuse walls of authority and plausibility, easily defended against one lonesome article published over a century ago.

The objective researcher is justified in questioning the credibility of a newspaper and an anonymous author, but on the reverse side of that same token, this same researcher would be naïve to blindly accept the mainstream narrative presented by a government institution that absolutely does have a conflict of interest regarding the manipulation of the human history narrative. This is especially true when it comes to the U.S. Government and the elevation of indigenous cultures in the early twentieth century.

So, what is the reality, whose word is to be believed? As with any mystery, the skeleton key to unlocking it is objective reasoning, the suspension of any preconceived notions, and sailing upon the winds of evidence, avoiding the inevitable rocks and sandbars of confirmation bias, formal, and informal fallacy.

Landmark Names Suggest There Is a Bigger Truth

It is an undisputed scientific fact that there does exist a large grouping of promontories with curious names in the park. The high points / summits are in the Haunted Canyon and Trinity Creek area of the park and include geological formations like the Osiris, Isis, Shiva and Horus Temples, the Tower of Set, and the Pyramids of Ra and Cheops, all legendary figures of ancient Egypt and India, respectively. 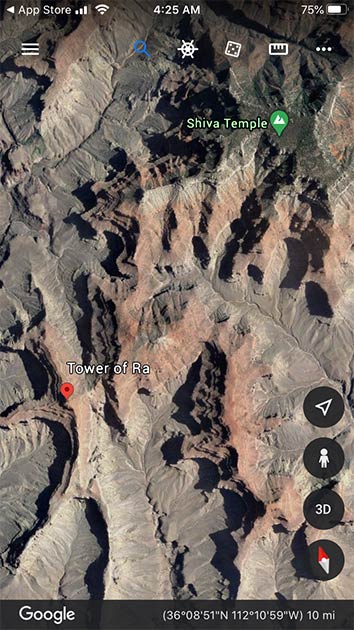 Geological formations in the Grand Canyon are given curious names. Source: Google maps

It is also worth noting that who was responsible for, and when exactly these landmarks were given these names, remains difficult to research. However, it must have occurred well before the printing of the 1909 article and the most likely suspect would be General John Wesley Powell who lead the first government-funded passage through the Grand Canyon during his 1869 Powell Geographic Expedition. Powell was also the first director of the Smithsonian’s Bureau of Ethnology, a founding member of the National Geographic Society, and a member of the Cosmos Club.

Apparently, Powell’s expedition experienced a series of disasters and this resulted in many of his notes being lost, but it is reasonable to conclude that it was he who gave these names to these landmarks. Curious choices, indeed! 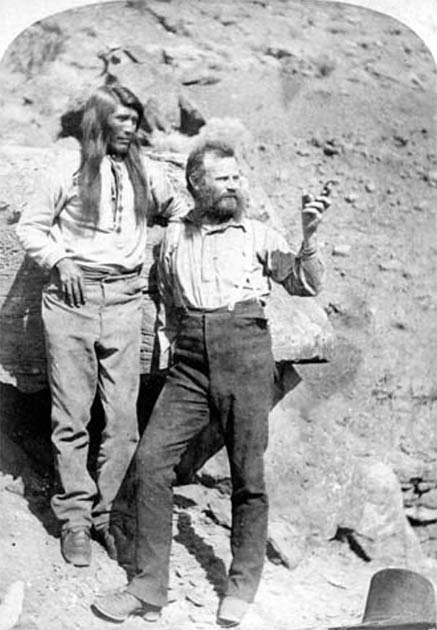 The Forbidden Zone In The Grand Canyon And The Law!

It would seem that the anonymous author of the news article in 1909 decided to capitalize on these names and sensationalize them. But this reasonable theory quickly becomes challenging when confronted with the next step in research, which validates the claim that this very section of the park is forbidden to explore.

Predictably, the official document regarding the restricted areas of the park is lengthy and painful to read, but some relevant language does lie therein: “The following geographical areas and/or roads within Grand Canyon National Park are closed to public use or are restricted by specific activities and/or specific times for specific activities: Hopi Fire Tower and Access Road, Maricopa Point Endangered Plant Area, Hopi Salt Mines, extending from river mile 62 to river mile 62.5 on the southeast side of the Colorado River (precisely where the aforementioned landmarks are located), Hance mine South of Hance Rapid, Furnace Flats from 71.0 to mile 71.3 on the north side of the Colorado River, and the Anasazi Bridge.”

It’s important to keep in mind that these “mines” are not active mining operations and may never have been mines at all, but are in fact, ancient man made tunnels, allegedly made by the Hopi as their names would suggest, and that is in it of itself interesting. The monotonous text goes on to discreetly command that nobody is permitted to enter any cave or “mine” at the park at any time, ever, without a permit, which they will never be granted. “In addition, artificial anthropogenic features (i.e., mine works) which comprise a twilight zone and a zone of perpetual darkness will be managed as caves… ‘as per the (Federal Cave Resources Protection Act of 1988)’ Permits required to satisfy this section may be applied for and/or obtained Backcountry Permits Office.”

As if these restricted areas were not suspicious enough, legislation was passed in 1987 that restricts the airspace over the canyon along with only two other National Parks, Yosemite and Haleakala, supposedly to “provide for substantial restoration of the natural quiet and experience of the park and protection of public health and safety from adverse effects associated with aircraft overflight.”

What on earth are they blathering about here? Restoration of natural quiet, the experience of the park, and the protection of public health and safety? How does an airplane flying thousands of feet above the canyon incur adverse effects on public health / safety? And if noise is a legitimate issue (doubtful), then why is it that they are not concerned with noise pollution at the other four hundred and eighteen national parks, only these three? These three parks have some other elements in common as well. They’re all sites of primordial geologic upheaval, volcanic remnants, karst earth deposits, vast, unexplored cave systems, and native lore that revolves around lost races of hominins, demi-gods, and deities responsible for creation. 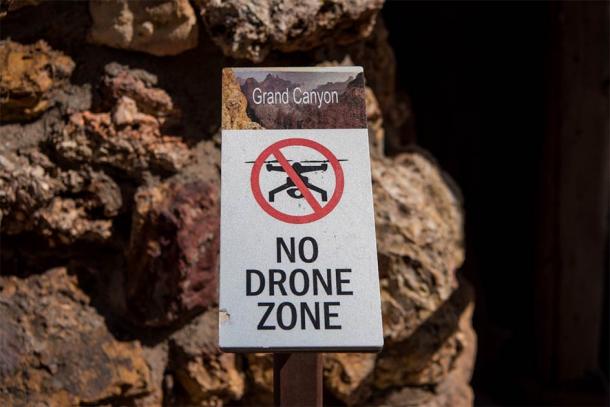 No drone zone in the Grand Canyon. (kellyvandellen / Adobe Stock )

Other Mysteries Near The Forbidden Zone Of The Grand Canyon

Is there any other evidence of some lost or aboriginal culture in the immediate area? In fact, there is, that of the Anasazi whose name translates into “the ancient ones” or “the ancient enemies.” They were an extremely mysterious people spread all across the southwest and were responsible for the many strange stone structures that litter the landscape and baffle authorities.

Sites like Mesa Verde, Four Corners, Mummy Cave, Chaco Canyon, Stanton’s Cave, and the Canyons of the Ancients National Monument were all abandoned by the time Europeans arrived, leaving behind only puzzling ruins of master masonry often aligned with solar and lunar events and adorned with odd towers and subterranean sacred spaces known as kivas.

Modern scholars believe that these people were just another Native American tribe who simply assimilated into the so called modern Puebloans, and this is the explanation for their disappearance. However, Navajo, Paiute, and Hopi oral traditions universally agree that the region was inhabited by a genetic / culturally distinct, vicious, and cannibalistic people prior to their arrival, and that these ancient enemies were eventually driven away or into extinction, although some degree of assimilation most likely did occur. While all of the aforementioned sites are worth researching in relation to this mystery, perhaps the two most intriguing are Stanton’s Cave and Mummy Cave.

Stanton’s Cave is located close to the South Canyon camping beach, near but not within the forbidden zone. This “cave” was originally believed by the authorities to be man-made and is currently sealed with metal bars to prevent entry. According to the sign, this is for the people’s safety and to protect an endangered bat habitat. The ceiling of the cavity is clearly vaulted and it does not resemble a natural feature. It is also known that this cavity was inhabited in the distant past and that many precious artifacts were removed during an official excavation in 1969-70 AD(6). 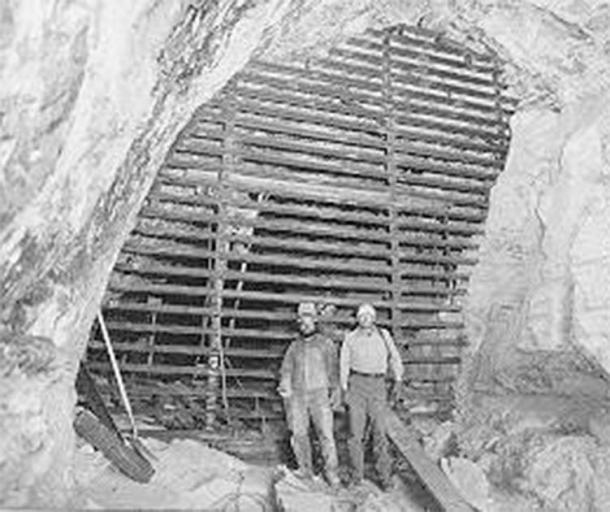