Yet Another Powerful Voice From the Rapidly Expanding Army of Reason

I came across this Facebook post recently by Dr Tom Cowan. He is yet another qualified and intelligent voice of reason steadfastly and dedicatedly censored by the corporate media in  an ongoing and increasingly desperate effort to prevent the People getting wise to things they don’t want you to know.

The truth of the matter is these highly qualified a voices of reason are growing in number and ubiquity at an accelerating rate and the enemies of Humanity are having dickens of a job keeping  lid on the volcano.

The entire biochemical paradigm of the pharmaceutical-industrial complex that results in the systemic poisoning of Man, which itself is intended to render human beings tired, sick and introverted on their health – and thus neutralised as potential sources of trouble (ie liberty) -is now in jeopardy.

All we have to do is keep going, keep speaking out, keep right on advocating Reason and common sense and keep on bringing to the attention of the People the huge reservoir of wisdom and more workable paradigms that are being kept from them by those with a vested interest in prolonging the Dark Age 0f their barbarism.

In other words, simply REFUSE to shut up.

And the more we can unite and work together, the sooner the Dark Age will be over and the Age of Reason begun.

Dr Tom Cowan is a highly recommended voice of reason.

Or see his videos on Bitchute here.

As you can see from this blockbuster article published on Aug. 9, 2016, in the prestigious journal Nature, researchers conclusively demonstrated that whenever fetal calf serum is added to any cell culture (as is done in virtually all modern virology studies, including those used during the past two years), it is simply impossible to use the results of this culture to determine the RNA sequence of any new vîru$. As they demonstrate, fetal calf serum itself is a rich source of many types of RNA sequences. Once this is introduced into the cell culture, from then on, there is no way to determine the origin of the RNA that researchers find.

The significance of this study cannot be overstated and validates what we’ve been saying for many months. Virologists use cell cultures to prove the existence of a new vîru$ and its cytopathic effect. If the culture is contaminated, as this study demonstrates, any claims about a new vîru$ and its genetic makeup are meaningless. 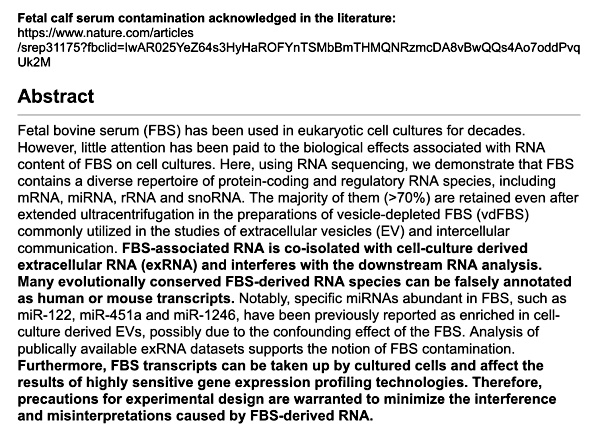