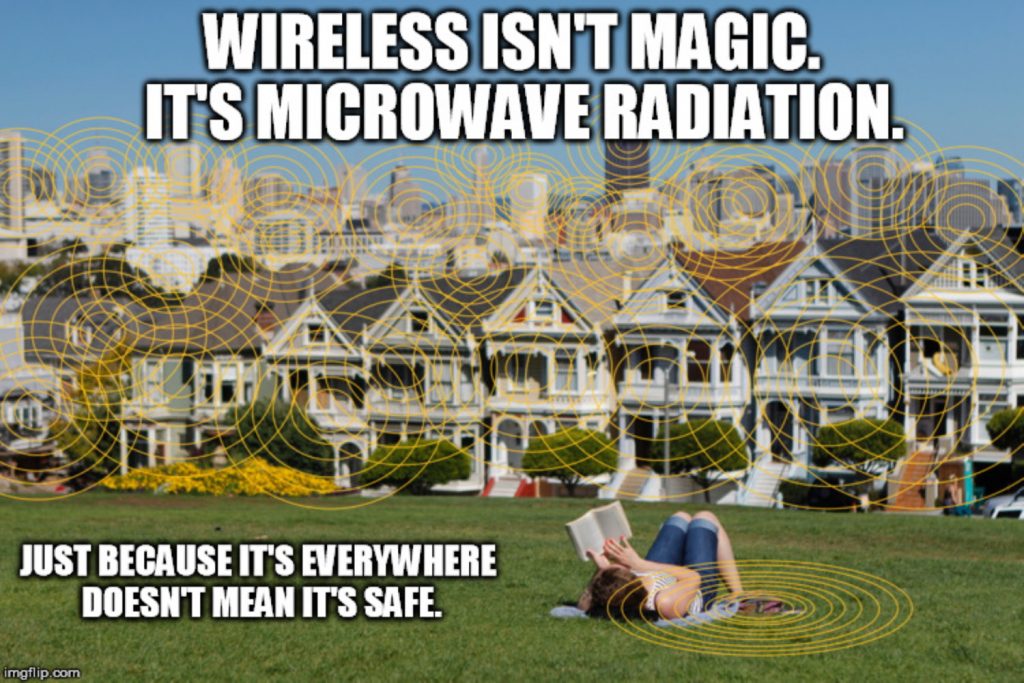 Decades of research has already determined that exposure to Electromagnetic Fields (EMF) and Radio Frequency (RF) Radiation is biologically harmful.  Children seem to be particularly vulnerable to it.

In regard to 5G technology, there is research that has proven that exposure is NOT SAFE and the majority of scientists worldwide are opposed to deployment.  Cities worldwide AND entire countries have taken action to ban, delay, halt, and limit installation AS WELL AS issue moratoriums due to health, safety, environmental and economic risks.  Unfortunately, where it hasn’t been banned, the “Race to 5G” continues despite numerous petitions to stop deployment as well as scientific papers that warn against increasing the already dangerously high levels of electromagnetic radiation aka “Electrosmog.”

Additional research was recently published that indicates the same – exposure is harmful and some are more vulnerable than others.

The Swiss expert group on electromagnetic fields and non-ionising radiation BERENIS just released a major evaluation of the scientific evidence on oxidative stress in their January 2021 newsletter finding that the majority of research studies have found effects which could be more severe  for those with preexisting conditions and the more vulnerable young and old.

This issue is central to the landmark US federal case EHT et al. v FCC which contends the FCC has ignored the scientific evidence presented to them showing harm.

The BERENIS review confirms that yes there is scientific evidence showing adverse impacts from non ionizing radiation as the  “majority of the animal and more than half of the cell studies provided evidence of increased oxidative stress caused by RF-EMF or ELF-MF.” Despite the methodological issues in the body of research “EMF exposure, even in the low dose range, can lead to changes in oxidative balance.” Furthermore as pre-existing conditions, such as immune deficiencies or diseases (diabetes, neurodegenerative diseases), compromise the body’s defence mechanisms, including antioxidative protection, “it is therefore possible that individuals with these conditions experience more severe health effects.”

“Is there evidence for oxidative stress caused by electromagnetic fields? A summary of relevant observations in experimental animal and cell experiments related to health effects in the last ten years”  by Prof Meike Mevissen, University of Bern Dr David Schürmann, University of Basel.

Excerpts from the conclusions

“Certainly, some studies are burdened with methodological uncertainties and weaknesses or are not very comprehensive in terms of exposure time, dose, number and quantitative analysis of the biomarkers used, to name a few. Taking these methodological weaknesses into account, nonetheless, a tendency becomes apparent, namely that EMF exposure, even in the low dose range, can lead to changes in oxidative balance.

In summary, the majority of the animal and more than half of the cell studies provided evidence of increased oxidative stress caused by RF-EMF or ELF-MF. This notion is based on observations in a large number of cell types, applying different exposure times and dosages (SAR or field strengths), also in the range of the regulatory limits. Certainly, some studies are burdened with methodological uncertainties and weaknesses or are not very comprehensive in terms of exposure time, dose, number and quantitative analysis of the biomarkers used, to name a few. Taking these methodological weaknesses into account, nonetheless, a tendency becomes apparent, namely that EMF exposure, even in the low dose range, can lead to changes in oxidative balance. Organisms and cells are generally able to react to oxidative stress, and many studies showed adaptation to EMF exposure after a recovery phase. Pre-existing conditions, such as immune deficiencies or diseases (diabetes, neurodegenerative diseases), compromise the body’s defence mechanisms, including antioxidative protection, and it is therefore possible that individuals with these conditions experience more severe health effects. In addition, the studies show that very young and elderly individuals can react less efficiently to oxidative stress induced by EMF, which of course also applies to other stressors that cause oxidative stress. More extensive studies under standardised conditions are necessary, to better understand and confirm these phenomena and observations.”

Summary of assessed studies related to EMF and oxidative stress

“The majority of animal studies investigating oxidative stress and EMF (ELF-MF and RF-EMF) have been published dealing with possible effects on the nervous system and reproduction, with a predominance for studies on increased ROS production and/or antioxidant protection mechanisms in the brain or specific brain regions. Concurrently, neural cells or neuron-like cells were also most frequently used in cell studies. Animal studies on oxidative stress related to a possible impairment of reproduction and development follow in second place, examining the impact of EMF exposure on various aspects and stages (sperm maturation, early stages of pregnancy such as implantation, effects in foetuses directly after birth and after a few weeks upon exposure of the mother). These animal studies were complemented by some cell studies, mainly executed in mouse cell lines of the male reproductive system and with spermatozoa. Not unexpectedly, more cell studies were published overall. In addition to the above mentioned cell types of the nervous and reproductive system, immune cells and isolated cells from the skin and epithelia were employed.”

“There is good evidence for an influence on cellular signalling pathways regulated by ROS. Here, the magnitude of activation as well as the possibility of compensation must be taken into account, when evaluating health impact in case of exhaustion of counter-regulation. Again, the state of differentiation was critical; differentiated cells reacted less sensitively than undifferentiated or early stage differentiated cells. Higher dose exposures displayed more pronounced effects, however, an effect caused by increase in temperature cannot always be ruled out. Nevertheless, there were also observations of increased oxidative stress in exposures conditions with field strengths/SAR values below the regulatory limits. Other methodological factors, such as keeping sham controls in another incubator, also pose a risk of false-positive results. Here, for example, vibrations, EMF of the incubator or their inadequate shielding come into play and it cannot be excluded that these factors have influenced the outcome and conclusion of some studies. The duration of exposure also seems to be relevant; shorter exposure durations of a few hours tended to increase ROS production and reduce antioxidative processes more often than when long exposures were applied.”

“Similar to findings for the central nervous system, there is evidence in the lymphoid system that the effects of EMF (RF-EMF including WiFi) are age-dependent. Very young animals could not compensate for oxidative stress, even after a recovery phase, whereas this was possible in older animals after complete development of the anti-oxidative protection system. The time of analysis of oxidative stress seems to play also a role in cell systems and short-term exposure was more likely to lead to an increase in oxidative stress in immune as well as in leukaemia cells. This increase was mostly temporary and the processes triggered by EMF were in part similar to a normal immune response.”

“Consequences of EMF on reproduction

The influence of EMF on fertility and on the development of foetuses is also an important issue, as developing organisms and cells are particularly sensitive to external stress factors. Effects of EMF on reproduction have been studied in male reproductive organs and in sperm and their precursors. In addition, dams were exposed to EMF to investigate possible impairment in the early and late stages of pregnancy and in the offspring.

The majority of the findings from the animal studies indicate a functional and morphological impairment of spermatozoa by RF-EMF exposure, which is associated with an increase of ROS, reduction of antioxidant capacity and lipid peroxidation. Here as well, a preceding insult or pre-existing condition (i.e. diabetes) was a risk factor that led to increased oxidative stress by exposure that could not be compensated. After exposure of the dams, an age-dependent effect on oxidative stress markers was seen in the offspring, but this was different depending on the organ system and in some cases did not show any evidence for induced oxidative stress. A study on impairments in early stages of pregnancy provided indications for reduced blastocyst implantation.

With regard to their role in fertility, cells of the reproductive system were also examined for effects of EMF. The majority of cell studies published in the last 10 years focused on investigations of RF-EMF effects, so that hardly any data are available on the influence of ELF-MF on oxidative balance. Due to their temperature sensitivity, developmental characteristics and accessibility, mainly male germ cells and cells from the reproductive organ were used in this context. As they are very temperature sensitive, temperature fluctuations must be excluded during exposure, otherwise false-positive findings will influence the evaluation. This was not the case in many cell studies, meaning that such false-positive findings cannot be excluded. All in all, the few cell studies do not provide any reliable evidence for an impairment of sperm cells and their precursors by EMF-induced oxidative stress.”

“Reactive oxygen species (ROS) are involved in many processes of the organism, including cellular signalling pathways; therefore, physiological concentrations of ROS in cells need to be maintained by engaging protective mechanisms (antioxidative enzymes and antioxidants). On the other hand, external and internal factors influence the amount of ROS by altering the activity of the ROS-forming and -degrading enzymes. For instance, the increased energy requirement during physical activity leads to a temporary oxidative stress and many environmental stress factors such as UV light or radioactive irradiation act via ROS formation. An oxidative imbalance has an effect on many important physiological processes and functions, such as inflammation, cell proliferation and differentiation, wound healing, neuronal activity, reproduction and behaviour by altering biochemical processes or even leading to DNA damage or peroxidation of fats. In particular, changes in cell proliferation and differentiation are closely related to carcinogenesis and the growth and development of organisms.” 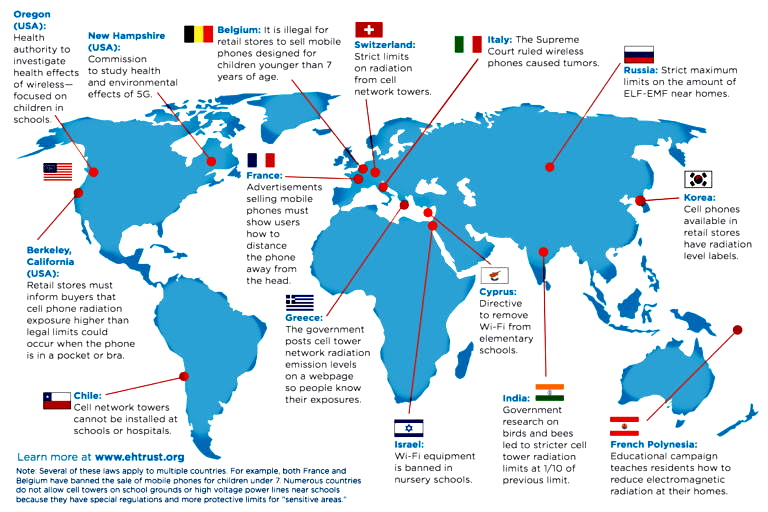 Got pets?  Exposure can affect them too.