[As a service to protect truth from censorship and to share widely, mirrored copies of this video are available at Truth Comes to Light Odysee, BitChute and Brighteon channels. All credit, along with our sincere thanks, goes to the original source of this video. Please follow links provided to support their work.]

My name is Ricardo Maarman and today I would like to give you an update on the ‘Show Us the Virus’ court case that is currently in front of the Constitutional Court of South Africa.

I would also like to discuss with you the way forward — especially in the face of these looming vaccination mandates that is in front of us.

At the very beginning of this process, we asked the government a very simple question: show us the virus.

And the reason why we asked this question was because one cannot prove lies.

And so when we asked the question ‘show us the virus’, their failure to do so was proof of their lies and their deceit.

For example, look at the exorbitant food prices, the increases in the fuel prices. And look at this diabolical option that is now placed in front of the people of South Africa: to choose between jabs and jobs.

The intention of this is quite clear — is to drive the people of South Africa into poverty and into desperation and dependency on them.

When Ramaphosa said “thuma mina”, “send me”, he was volunteering to do the devil’s work. Ramaphosa spoke of the “new dawn” in his speech, he was paying tribute to Satan, Lucifer, whom they call the New Dawn.

Ramaphosa is part of an elite that control the entire South African society — a political, economic, social, religious elite. And even the controlled opposition amongst us, they are all wolves in sheep’s clothing.

And now they are waging open war against the people of South Africa. When Ramaphosa couldn’t and wouldn’t show us the virus, we approached the Constitutional Court of South Africa, asking the court to restore the people’s rights and to remove Ramaphosa from power.

The Constitutional Court has been grappling with this matter for almost three months now. What we have done in the meantime, and currently, is to approach the High Court of South Africa, asking them to grant us an urgent interim interdict against the entire lockdown measures, including the vaccinations.

Because these measures cannot be allowed to continue and even to escalate while there is a dispute pending in front of the Constitutional Court.

I will make an example of the grounds upon which we are approaching the court for this urgent interim interdict. If your two children are arguing about a toy and one of them approaches you and says ‘please intervene’. Then the first thing that you would do is to stop both of them from playing with the toy until after you have made your final decision.

I ask you that we should not pass judgment on the courts in South Africa until after the court has passed its judgment.

That we should oppose chaos with order.

That we should oppose evil with good.

That we should oppose injustice with justice.

I ask you that — evil thrives when good people do nothing. So it is important for us to do something.

We are doing this. We are approaching the High Court for this urgent interim interdict, to stop these evil measures from further destroying the people of South Africa.

We ask you to give us financial support so that we can have the resources to sustain this hard and tough fight.

We ask you to pray for us.

We ask you to spread the truth amongst each other and to encourage each other to patiently persevere.

Victory will be ours eventually.

And above all, we ask you that you put all your trust in God.

Thank you very much. 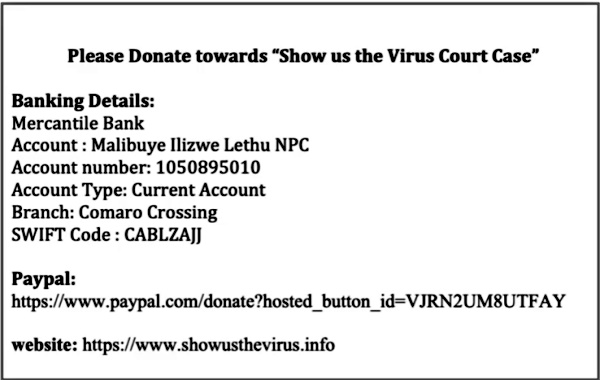 Connect with Show Us the Virus

Ricardo Maarman holds a masters degree in International Politics  (MA). He took the South African government to court to produce proof of the isolation of Sars-CoV2, the virus said to be causing the condition, Covid-19. He is an ordinary person. Ordinary people need to stand up for the truth alongside him. Connect with Richardo Maarman at showusthevirus.info.