The Significance of the Nuremberg Code

The Significance of the Nuremberg Code

The universal right of Informed Consent to medical interventions has been recognized in US law since at least 1914.

1. That year, the New York Court of Appeals established the right to informed consent to medical intervention in a case involving non-consensual surgery.

“Every human being of adult years and sound mind has a right to determine what shall be done with his own body; and a surgeon who performs an operation without his patient’s consent commits an assault for which he is liable in damages.”

2. The 1947 Nuremberg Code is the most important legal document in the history of medical research ethics. It established 10 foundational principles of ethical clinical research.

The first and foremost principle is unequivocal:

“The voluntary consent of the human subject is absolutely essential”.

It prohibits research to be conducted on human beings without the informed consent of the individual.

The significance of the Nuremberg Code is as follows:

The Belmont Report acknowledges at the outset that the Nuremberg Code “became the prototype of many later codes intended to assure that research involving human subjects would be carried out in an ethical manner.”

However, federal regulations only apply to government-sponsored human research and, unlike the Nuremberg Code these regulations have been “modified” in response to political pressure. For example, 45 CFR 46.408(c) waives parental consent for the use of children as human subjects. “This waiver is usually but not always limited to minimal risk research…”

4. The first US Supreme Court decision in which the Nuremberg Code was invoked was in 1987. The plaintiff was a Sergeant in the US Army who sought compensation — having been a victim in a covert CIA-sponsored, LSD mind-control experiment. US v. Stanley, 483 YS 669 (1987)

“In experiments designed to test the effects of [ ] LSD, the Government of the United States treated thousands of its citizens as though they were laboratory animals, dosing them with this dangerous drug without their consent. One of the victims, James B. Stanley, seeks compensation from the Government officials who injured him…

…it is important to place the Government’s conduct in historical context. The medical trials at Nuremberg in 1947 deeply impressed upon the world that experimentation with unknowing human subjects is morally and legally unacceptable. The United States Military Tribunal established the Nuremberg Code as a standard against which applies to all citizens— soldiers as well as civilians.”

Its first principle was: “The voluntary consent of the human subject is absolutely essential”.

5. In 1994, the Advisory Committee on Human Radiation Experiments was tasked with investigating and documenting the scope of unethical US government human radiation experiments. The (ACHRE) Report (1995) includes CIA mind-control experiments and devotes two chapters to the Nuremberg Code, and describes the growing influence that the Nuremberg Doctors Trial and the Nuremberg Code had on the American medical establishment.

Whereas in the 1949 edition of the best-known textbook of American medical jurisprudence, Doctor and Patient and the Law by Louis Regan a physician and lawyer, did not even cite the Nuremberg Code, devoting merely a few lines to the subject of human experimentation, in the 1956 edition, the subject was expanded to three pages, and the judges’ preamble to the Code was reiterated verbatim (without quotation marks). Dr. Regan added, “all agree” about these principles. They are “the most carefully developed set of precepts specifically drawn to meet the problem of human experimentation.”

The ACHRE report notes that: “while the [Stanley] suit was unsuccessful, dissenting opinions put the Army–and by association the entire government–on notice that use of individuals without their consent is unacceptable. The limited application of the Nuremberg Code in U.S. courts does not detract from the power of the principles it espouses…” ACHRE Report Chapter 2 & Chapter 3 (1995)

6. In 2001, the Maryland Court of Appeal explicitly cited the Nuremberg Code as a source of legally enforceable ethical standards in the case against the Kennedy Krieger Institute.

The case involved a government lead abatement experiment that exposed inner city Black toddlers to lead paint. The purpose was to record the damaging effects of lead. The parents were not informed about the purpose or the risks.

“The researchers and their Institutional Review Board apparently saw nothing wrong with the search protocols that anticipated the possible accumulation of lead in the blood of otherwise healthy children as a result of the experiment, or they believed that the consents of the parents of the children made the research appropriate.

Of special interest to this Court, the Nuremberg Code, at least in significant part, was the result of legal thought and legal principles, as opposed to medical or scientific principles, and thus should be the preferred standard for assessing the legality of scientific research on human subjects. Under it, duties to research subjects arise.

The Nuremberg code [i]s a summary of the legal requirements for experimentation on humans The Code requires that the informed, voluntary, competent, and understanding consent of the research subject be obtained. Although this principle is placed first in the Code’s ten points, the other nine points must be satisfied before it is even appropriate to ask the subject to consent.

The Nuremberg Code is the ‘most complete and authoritative statement of the law of informed consent to human experimentation.’ It is also ‘part of international common law and may be applied, in both civil and criminal cases, by state, federal and municipal courts in the United States.”

7. In 2009, the U.S. Second Circuit Court of Appeals in the Southern District of New York cited the Nuremberg Code as: “the universally accepted norm in customary international law regarding nonconsensual medical experimentation.”

The case involved Pfizer which conducted an unapproved, trial of its experimental antibiotic, Trovan on children in Nigeria. The court found Pfizer guilty.

“Among the nonconsensual experiments that the tribunal cited as a basis for their convictions were the testing of drugs for immunization against malaria, epidemic jaundice, typhus, smallpox and cholera. Seven of the convicted doctors were sentenced to death and the remaining eight were sentenced to varying terms of imprisonment.

The American tribunal’s conclusion that action that contravened the Code’s first principle constituted a crime against humanity is a lucid indication of the international legal significance of the prohibition on nonconsensual medical experimentation.

Telford Taylor explained,“Nuernberg was based on enduring [legal] principles and not on temporary political expedients, and this fundamental point is apparent from the reaffirmation of the Nuernberg principles in Control Council Law No. 10, and their application and refinement in the 12 judgments rendered under that law during the 3-year period, 1947 to 1949.”

8. In 2013, the US Supreme Court reiterated the legal principle of informed consent in a case involving a citizen who refused to consent to a blood test. A blood sample was taken against his will on orders of a police officer. In a 6 to 3 ruling, the Supreme Court ruled in favor of the plaintiff — even as the justices recognized that both privacy and harm were minimal.

“this Court has never retreated from its recognition that any compelled intrusion into the human body implicates significant, constitutionally protected privacy interests…”

His attorney Ana Garner told Bloomberg News: “You can’t be forced to be a human guinea pig. We have the right to bodily integrity.”

10. On March 7th an Israeli citizens group filed a a petition to the International Criminal Court charging the Israeli Government with violating the Nuremberg Code with its mandatory Vaccination policy

Anshe Ha-Emet (People of the Truth) a fellowship, composed of Israeli doctors, lawyers and citizens, filed a complaint against the government national “medical experiment” without the informed consent of the citizens. Attorneys Ruth Makhachovsky and Aryeh Suchowolski filed the complaint stating:

“When the heads of the Ministry of Health as well as the prime minister presented the vaccine in Israel and began the vaccination of Israeli residents, the vaccinated were not advised, that, in practice, they are taking part in a medical experiment and that their consent is required for this under the Nuremberg Code”. 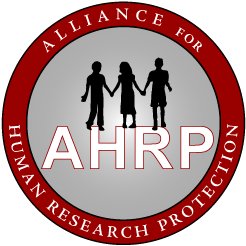 The Alliance for Human Research Protection (AHRP) is a national network of lay people and professionals dedicated to advancing responsible and ethical medical research practices, to minimizing the risks associated with such endeavors and to ensuring that the human rights, dignity and welfare of human subjects are protected.

This year, more than 15 million Americans will be recruited into clinical trials.

The AHRP mission is to stand up – and speak out – for the human rights of research subjects – especially those who are vulnerable and /or susceptible to coercion, manipulation and exploitation. Those who are incapable of exercising their right to informed consent are in greatest need of protection from research abuse.