Attack of the Transphobic Putin-Nazi Truckers!

Attack of the Transphobic Putin-Nazi Truckers!

They rolled up on Ottawa’s Parliament Hill like one of the plagues in the Book of Revelations, honking their infernal air horns, the grills of their tractors grinning demonically, the sides of their dry vans painted with blasphemies like “FREEDOM TO CHOOSE,” “MANDATE FREEDOM,” “NO VACCINE MANDATES,” and “UNITED AGAINST TYRANNY.”

Yes, that’s right, New Normal Canada has been invaded and now is under siege by hordes of transphobic Putin-Nazi truckers, racist homophobes, anti-Semitic Islamaphobes, and other members of the working classes!

According to the corporate media, these racist, Russia-backed, working-class berserkers are running amok through the streets of Ottawa, waving giant “swastika flags,” defecating on war memorials, sacking multi-million-dollar “soup kitchens,” and eating the food right out of homeless people’s mouths. Rumor has it, a kill-squad of truckers has been prowling the postnatal wards of hospitals, looking for Kuwaiti babies to yank out of their incubators.

I know, this is Canada, so that sounds a little dubious, but this has all been thoroughly fact-checked by the fact checkers at the New Normal Ministry of Truth … you know, the ones that fact-checked Russiagate, and the Attempted Putin-Nazi Insurrection of January 6 at the US Capitol, and the safety and effectiveness of the Covid “vaccines,” and the masks, and the inflated Covid statistics, and the rest of the official Covid narrative.

Or just take it from Prime Minister Justin Trudeau … 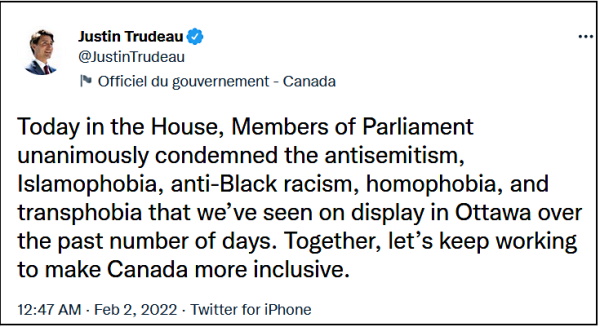 Now, this is the actual prime minister of Canada, not just some woke fanatic on Twitter. He was tweeting from his fortified Covid Bunker in an undisclosed location somewhere in the Yukon, or possibly the United States, where he fled as the transphobic Putin-Nazi truckers rolled up outside his office in Ottawa. Trudeau had vowed to stand and fight, but he had no choice but to flee the capital after he mysteriously tested positive for Covid (which also might have been the work of the Russians, possibly the same professional team of weed-smoking, hooker-banging Novichok assassins that got to the Skripals back in 2018).

Russian involvement has not yet been confirmed by the ex-CIA and NSA officials posing as “analysts” on CNN, but according to the CBC, “there’s concern that Russian actors could be continuing to fuel things as the protest grows, and perhaps even instigating it from the outset.”

And, in light of the exposure of Putin’s plot to produce a “very graphic” false-flag video “involving the deployment of corpses” as a pretext to invade the Ukraine and set off nuclear Armageddon, or at least a raft of economic sanctions and DEFCON 1-level bellicose verbiage, it’s possible that the entire “Covid pandemic” was an elaborate Putin-Nazi ruse designed to bring down the Trudeau government, and sabotage the implementation of the New Normal global-segregation system, and the compulsory mRNA “vaccination” of every man, woman, and child on earth, and “democracy,” and transgender rights … or whatever.

But, seriously, this is where we are at the moment. We are in that dangerous, absurdist end-stage of the collapse of a totalitarian system or movement where chaos reigns and anything can happen. The official Covid narrative is rapidly evaporating. More and more people are taking to the streets to demand an end to whole fascist charade … no, not “transphobic white supremacists” or “anti-vax extremists,” or “Russian-backed Nazis,” but working-class people of all colors and creeds, families, with children, all over the world.

The Covidian Cult has lost control. Even hardcore mask-wearing, social-distancing, triple-vaxxed-double-boosted members are defecting. Formerly fanatical New Normal fascists are mass-deleting their 2020 tweets and switching uniforms as fast as they can. No, it isn’t over yet, but the jig is up, and GloboCap knows it. And their functionaries in government know it.

And therein lies the current danger.

There is a narrow window — a month or two, maybe — for governments to declare “victory over the virus” and roll back their segregation systems, mask-wearing mandates, “vaccine” mandates, and the rest of the so-called “Covid restrictions.” Many governments are already doing so, England, Norway, Denmark, Sweden, Switzerland, Finland, Ireland, etc. They have seen which way the wind is blowing, and they are rushing to dismantle the New Normal in their countries before … well, you know, before a convoy of angry truckers arrives at their doors.

If they let that happen, they will find themselves in the unenviable position that Trudeau is now in. The Canadian truckers appear to be serious about staying there until their demands are met, which means Trudeau only has two options: (1) give in to the truckers’ demands, or (2) attempt to remove them by force. There’s already talk about bringing in the military. Imagine what an unholy mess that would be. Odds are, the military would disobey his orders, and, if not, the world would be treated to the spectacle of full-blown New Normal Fascism in action.

Either way, Trudeau is history, as long as the truckers stand their ground. I pray they do not give an inch, and I hope the leaders of other New Normal countries, like Australia, Germany, Austria, Italy, and France, are paying close attention.

Some of my readers will probably remember a previous column in which I wrote:

“This isn’t an abstract argument over ‘the science.’ It is a fight … a political, ideological fight. On one side is democracy, on the other is totalitarianism. Pick a fucking side, and live with it.”

This is it. This is that fight. It is not a protest. It is a game of chicken. A high-stakes game of political chicken. In the end, politics comes down to power. The power to force your will on your adversary. GloboCap has been forcing the New Normal on people around the world for the past two years. What we are witnessing in Canada is the power of the people, the power the people have always had, and which we will always have, when we decide to use it … the power to shut down the whole GloboCap show, city after city if necessary. 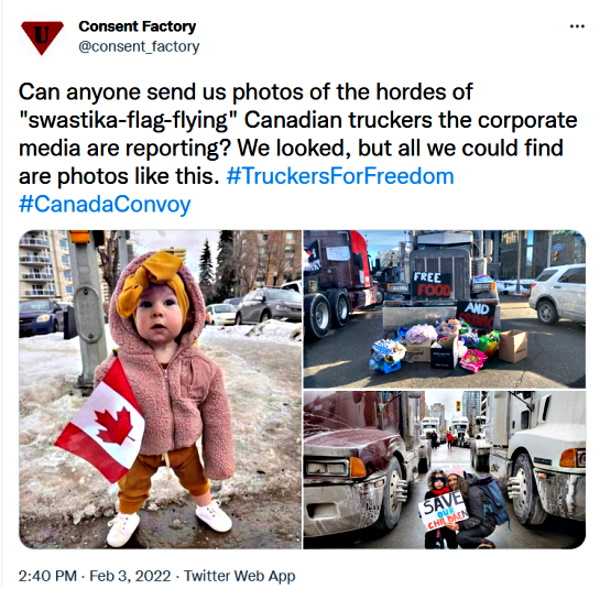