There were 84,466 reports of serious injuries, including deaths, during the same time period — up 3,416 compared with the previous week. 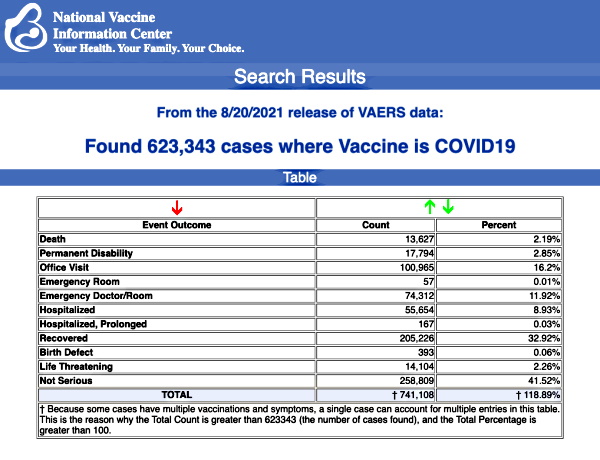 An award-winning BBC radio host died as a result of complications from her first dose of AstraZeneca’s COVID vaccine, coroner Karen Dilks concluded.

Lisa Shaw, 44, received her first dose of AstraZeneca on April 29. On May 13, she was taken by ambulance to University Hospital of North Durham after having a headache for several days. She was transferred to the Royal Victoria Infirmary in Newcastle, where she received a number of treatments, which included cutting away part of her skull to relieve the pressure on her brain. She died May 21.

According to the BBC, Tuomo Polvikoski, a pathologist, told the coroner Shaw was fit and healthy before receiving the vaccine. When asked about the underlying cause of the fatal clotting on her brain, Polvikoski said the clinical evidence “strongly supports the idea that it was, indeed, vaccine-induced.”

This is the first COVID vaccine approved by the FDA, and is expected to open the door to more vaccine mandates by employers and universities.

According to The Washington Post, Pfizer’s vaccine approval was the fastest in the agency’s history, coming less than four months after Pfizer/BioNTech filed for licensing on May 7.

According to an article published Aug. 20 in the BMJ, transparency advocates criticized the FDA decision not to hold a formal advisory committee meeting to discuss Pfizer’s application for full approval — an important mechanism used to scrutinize data.

Last year the FDA said it was “committed to use an advisory committee composed of independent experts to ensure deliberations about authorisation or licensure are transparent for the public.”

But in a statement to The BMJ, the FDA said it did not believe a meeting was necessary ahead of the expected full FDA approval.

Kim Witczak, a drug safety advocate who serves as a consumer representative on the FDA’s Psychopharmacologic Drugs Advisory Committee, said it’s concerning that full approval is based on only six months’ worth of data — despite clinical trials designed for two years — and there’s no control group after Pfizer offered the product to placebo participants before the trials were completed.

Buried in the fine print of Monday’s approval of the Pfizer Comirnaty vaccine are two critical facts that affect whether the vaccine can be mandated, and whether Pfizer can be held liable for injuries, according to Children’s Health Defense Chairman Robert F. Kennedy, Jr. and Dr. Meryl Nass.

Here's my latest with @NassMeryl… Buried in fine print of Monday's approval by FDA of Pfizer Comirnaty COVID vaccine are 2 critical facts that affect whether vaccine can be mandated + whether Pfizer can be held liable for injuries.https://t.co/QtpHufCKDI

Kennedy and Nass, who accused the FDA of pulling a “bait and switch” on the public, said the FDA acknowledged that while Pfizer has “insufficient stocks” of the newly licensed Comirnaty vaccine available, there is “a significant amount” of the Pfizer-BioNTech COVID vaccine — produced under Emergency Use Authorization (EUA) — still available for use.

The FDA decreed that the Pfizer-BioNTech vaccine under the EUA should remain unlicensed — but that it can be used “interchangeably” (page 2, footnote 8) with the newly licensed Comirnaty product.

Second, the FDA said the licensed Pfizer Comirnaty vaccine and the existing EUA Pfizer vaccine are “legally distinct,” but said their differences do not “impact safety or effectiveness.”

Kennedy and Nass said EUA products are experimental under U.S. law. Both the Nuremberg Code and federal regulations provide that no one can force a human being to participate in this experiment.

Under 21 U.S. Code Sec.360bbb-3(e)(1)(A)(ii)(III), “authorization for medical products for use in emergencies,” it is unlawful to deny someone a job or an education because they refuse to be an experimental subject, they wrote.

At least for the moment, the Pfizer Comirnaty vaccine has no liability shield. Vials of the branded product, which say “Comirnaty” on the label, are subject to the same product liability laws as other U.S. products, Kennedy and Nass said, adding that “Pfizer is therefore unlikely to allow any American to take a Comirnaty vaccine until it can somehow arrange immunity for this product.”

On Thursday, Sen. Ron Johnson (R-Wis.) wrote the FDA raising similar concerns and questions about the agency’s approval of the Pfizer Comirnaty vaccine.

In his letter, Johnson asked FDA Acting Commissioner Dr. Janet Woodruff why the FDA didn’t grant full licensure for the Pfizer-BioNTech vaccine that is already in use and available in the U.S., and how the agency will ensure that those being vaccinated under mandates will receive the FDA-approved version.

As The Defender reported Aug. 24, the most recent data from the CDC shows 9,716 breakthrough cases resulting in hospitalization or death as of Aug. 16. However, the agency states those numbers are underreported.

On May 1, the CDC made a decision to stop tracking all breakthrough cases and instead only track cases in the fully vaccinated that resulted in hospitalization or death. That leaves public health officials without the full data that can answer questions as the new Delta variant spreads.

In an interview with PBS News Hour, Jessica Malaty Rivera, an infectious disease epidemiologist and research fellow at Boston Children’s Hospital and former science communications lead at the COVID Tracking Project, said not tracking breakthrough data with as much granularity as we would hope is “basically creating blind spots in our understanding of the true impact of the virus, especially the variants that are circulating so widely in the United States.”

Analysis showed that in six of the states, breakthrough infections made up 18% to 28% of all newly diagnosed cases of COVID in the past several weeks, and 12% to 24% of all COVID-related hospitalizations, with reported deaths higher than the CDC’s original estimate of .5%.

Pfizer CEO Albert Bourla on Tuesday told Fox News the company has a system in place to turn around a variant-specific jab within 95 days in the likelihood a vaccine-resistant COVID strain emerges, but experts warn that strategy will backfire.

Bourla said Pfizer hasn’t identified any variants that could escape the vaccine yet. However, that statement contradicts the findings of numerous studies by the Centers for Disease Control and Prevention (CDC) which show waning immunity against the Delta variant.

Dr. Peter McCullough, board certified in internal medicine, cardiovascular diseases and clinical lipidology, said in a recent podcast: “There are clearly sources of information to suggest that once we start vaccination and we get more than 25% of the population vaccinated, we will allow one of the variants that’s in the background to emerge because it’s resistant to the vaccine.”

“That [theory] makes sense,” McCullough said. “Just like an antibiotic, once we get to a certain percentage of coverage with an antibiotic, we’ll allow a resistant bacteria to move forward.”

Even if we had complete uptake in vaccines and complete masking, Malone said, CDC data makes it clear that at best we can slow the spread of Delta but we can’t stop it.

One study found vaccine effectiveness among frontline healthcare workers declined by nearly 30 percentage points since the Delta variant became the dominant strain in the U.S.

The analysis also concluded COVID vaccines were only 80% effective in preventing infection among the frontline healthcare workers.

The CDC cautioned in its report that vaccine effectiveness “might also be declining as time since vaccination increases and because of poor precision in estimates due to limited number of weeks of observation.”

The publication of the new studies followed a week after the CDC released its first three reports on vaccine efficacy — which also showed waning vaccine protection against the Delta variant.

Despite multiple phone and email communications with many people at the CDC, and despite being told that our request was in the system and that someone would respond, we have not yet received answers to any of the questions we submitted. It has been 172 days since we sent our first email to the CDC requesting information.