Despite Sanctions the Ruble Is Stronger Than Before the War. Why?

Home / Finance, Currencies & Planetary Resources / Despite Sanctions the Ruble Is Stronger Than Before the War. Why?

Despite Sanctions the Ruble Is Stronger Than Before the War. Why?

It’s official, as of right now the Russian ruble is worth more US dollars than before the invasion of Ukraine.

On the 22nd of February this year, one US dollar would exchange for just over 79 rubles. As of the time of writing, it is now 78.

Across the board, the ruble is stronger than before the war. So, how has this happened?

Aren’t NATO, the EU and the rest of the “international community” meant to be crippling the Russian economy with biting sanctions?

The media are claiming that the strength of the ruble “may be illusory” or that Russia has exploited a “loophole” in the sanctions and used “financial alchemy” to “rescue the ruble”.

Reminder: In 2014, when the west sanctioned Russia over the Crimean referendum, the ruble lost almost half its value.

It recovered slightly in 2016, and has since stabilized, but has never come close to its pre-Crimean worth: 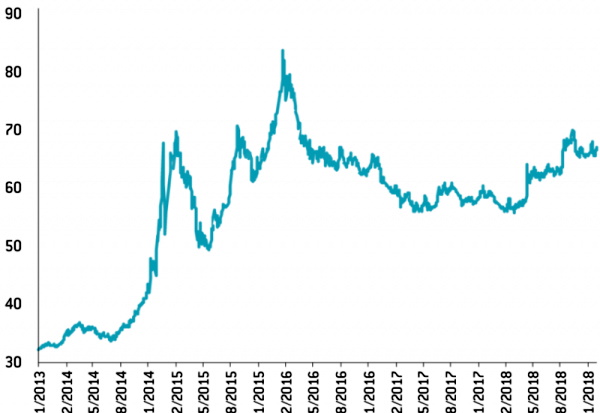 So, presumably the earlier sanctions didn’t have a “loophole” in them, and/or the Russians either weren’t aware of this “financial alchemy” back then, or simply decided not to use it.

As we have written before, in 2014/15 the US and Saudi Arabia flooded the market with cheap oil and crashed the price. Russia (and Iran, and Venezuela) all suffered huge economic damage from this move.

But far from repeating this tactic, Saudi Arabia has increased their prices.

The Western press claims that the US asked Saudi Arabia to increase oil production and they refused. They claim Saudi Arabia “sided with Russia”, and that they should be “punished”.

Meanwhile, Turkey has just suspended the trial of the Saudi citizens alleged to have murdered journalist Jamal Khashoggi, a move that should please the Saudi government no end.

The West seems as bad at “punishing” their misbehaved allies as they are at tanking the value of the Russia’s currency.

To sum up – The price of oil is going up and the ruble is worth just as much as it was before the war.

At the same time, Europe and the US are expecting food and gas shortages, seeing record petrol prices and talking about rationing.

Last week we wrote a piece asking “Is Russia the REAL target of Western sanctions?”

As the war continues, and the ruble strengthens, the answer is becoming pretty obvious.