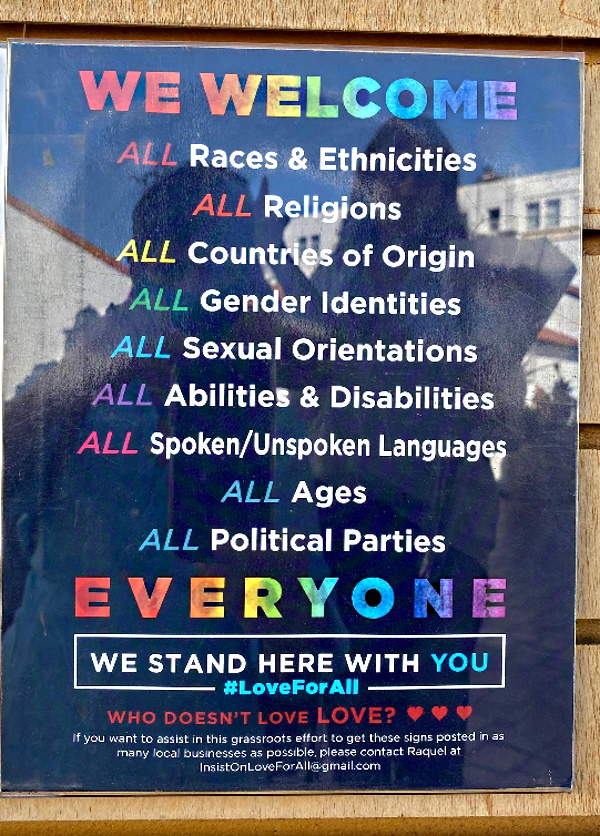 The picture above is of a sign outside a performing arts theater in Santa Barbara, California. Looks like everyone is welcome. Well, not really. It turns out that if you’re  not “vaccinated” you’re not welcome. If you haven’t arrived at the ticket booth with ID and proof of being injected with two doses of an emergency use experimental gene treatment for “covid 19” — a treatment which has no efficacy and is associated with millions of serious injuries and deaths — this #LoveForAll message doesn’t actually apply to you. If you’re not “vaccinated” the only way you can get into the theater now is if you have taken a test proving you don’t have the plague. Don’t want a PCR swab up your nose? Too late for an antigen test? Tough luck. This rainbow venue welcomes EVERYONE, except for carriers of the plague.

“Who doesn’t love LOVE?” Apparently, the state of North Carolina doesn’t. The founder of Insist On Love For All which makes and sells the $60 sign displayed above, took a trip to Asheville, North Carolina a few years ago and was impressed by signs “embracing diversity.” Says Insist On Love’s founder,

shop owners started displaying these signs over two years ago [2018] to encourage tourism following the passage of the controversial House Bill 2 in North Carolina, which requires certain public bathrooms to be designated for use by males or females based on their biological sex. “The signs in Asheville moved me. Love is the only weapon we can use to fight hate . . . “

In this case, “hate” was displayed by 1) the idea that men and women should have separate bathrooms, 2) the idea that men (or men who think they’re women) don’t have a right to walk into women’s bathrooms, and vice versa,  3) the fact that other sexes besides male and female have not been acknowledged, and 4) the fact that the state of North Carolina thus discriminated against all those who don’t have male/female privilege. There is also the ‘hate’  involved in the unwillingness of North Carolina to provide separate bathrooms for a theoretically unlimited number of other genders. Unless #LoveForAll is somehow a front for a consortium of plumbing supply companies (this would actually be comforting news), there is nothing left for us to conclude but that ‘love’, as the term is being used here, is indeed a weapon, not to fight hate, but to fight reason. ‘Love’ is now a buzzword in a well-established “diversity and inclusion” narrative sent down from academic critical theory to the progressive left to the mainstream media to the culture at large. Has there ever been a time when good things have been so twisted into their opposite? This is not about love or inclusion. This is shallow virtue signaling by people who have been swallowed up by a political machine designed to turn cultural norms upside down, not for the purpose of bringing needed change, but for the purpose of creating chaos and a loss of rationality, after which new supposed norms can just be lifted into place.

“All sexual orientations”, cited in the sign, is also a topic at the current May 22-28 Davos forum, where “resilience through equity” and “inclusivity” for the “LGBTQI+ community” is on the formal agenda. Do the corporate bosses, social engineers, and preening politicians at this forum really care about equality, or are they just using the brand to create the upheaval necessary to bring in fantastic profits and power? The answer is obvious. The agenda is exclusion, not inclusion; fascism, not liberalism. Their plan is for the majority of humanity, gay or straight, to be excluded from their rights, autonomy, and independence, while the bosses enjoy their wealth and slave labor. Like #LoveForAll,  everyone is welcome in the Great Reset except those who believe there are only two sexes — that is, just about everybody since the beginning of human history. Everyone is welcome in virtue-signaling countries, corporations, and institutions except those who choose not to accept a medical intervention also never heard of before in human history — that of altering the human genome on the pretext of defeating a virus. In other words, everyone is welcome except those who have chosen not to go insane. The insanity is called wokeness. Wokeness is nothing but a tool being used to effect a very ugly and very ambitious power grab. When the job is done, everyone duped into thinking they were fighting for the victims of oppression and equality for all will be swatted away like flies.

The would-be gods at Davos brought us their own version of the Apocalypse — plague, war, famine, and death became covid, Ukraine, food shortages, and vaccines. Do such people even remotely care about racial prejudice and gender dysphoria? No. They either massively exploited or completely made up these issues to create disorder. Indeed, their eugenicist predecessors had certain, ahem,  opinions about people with disabilities, sexual deviants, and racial groups which they know can’t be mentioned in polite society today. So they went the other way. Not believing in God, the Davos elite see themselves as gods. The further this delusion takes them, the harder they will fall. There will also come a time of reckoning for the collaborators in this program — those who, wittingly or not, aided this monstrosity. Galling self-righteousness, ignorance, and hypocrisy were the least of the crimes in this class. The ones higher up — those who made the plans, gave the orders, and knew what they were doing — face a reckoning that perhaps we do not have words for. It may be a regular new round of guillotining such as we have seen before in history. Or it may be that this time wickedness has gone so far it will have to be ended forever. Prospects for the Davos crew do not look good.

cover image based on creative commons work of KELLEPICS / pixabay

Find more of Richard’s writings at his own website: http://www.richardhugus.com/