[As a service to protect truth from censorship and to share widely, mirrored copies of this video are available at Truth Comes to Light Odysee & BitChute channels. All credit, along with our sincere thanks, goes to the original source of this video. Please follow links provided to support their work.]

Good day South Africa. My name is Ricardo Marmaan and today is the 8th of April 2022, exactly three days after the Western Cape High Court dismissed our ‘Show us the virus‘ court case application, an application for an urgent interim interdict against the lockdown regulations.

It was dismissed with a punitive cost order against me. This judgment came after a 2-month long delay and exactly one day after Ramaphosa made his speech in which he so-called ended the lockdown. We know he did not end it; he merely escalated it by deceptive means.

We asked the Western Cape High Court to grant the people legal protection against being forced by Ramaphosa and the big businesses into these harmful lockdown regulations — like the wearing of the suffocating masks, the use of these poisonous hand sanitizers, and to be forced into taking these deadly vaccinations.

Ramaphosa and these vaccine producers and big businesses already enjoy such legal protection because they are protected by the regulations. They are acting under the regulations.

We asked the Western Cape High Court, in a reasonable and just application, that the people of South Africa be granted the very selfsame legal protections.

But the court unfortunately dismissed our application with a punitive cost order against me.

South Africa, at the very beginning of this process, we asked Ramaphosa to show us the virus. He failed to do so and, therefore, he is perpetrating a virusless pandemic against the people of South Africa.

South Africa, it is time that we see this for what it is. Our beautiful nation has been completely, or more or less completely subverted.

Subversion means that our beautiful nation has been infiltrated by foreign aggressive actors and their local agents. And they are, through lies and deception, leading us to our own self destruction.

The National Health Act amendments will make this subversive and self destructive measures permanent. But Parliament can stop these amendments. Parliament have taken an oath to represent the interests and protect the interest of the people of South Africa, to represent the people of South Africa, to hold Ramaphosa, the Minister of CoGTA [Co-Operative Governance and Traditional Affairs] , and the Minister of Health accountable.

It is time that we wake Parliament up and instruct them because they are our representatives.

I suggest that you go to the Parliament website, parliament.gov [parliament.gov.za], and find the members of Parliament, identify them, contact them and go to them in droves. They live amongst us.

— that if they fail to obey our lawful instructions then it is clear that they are agents of subversion.

Parliament has the power to stop these amendments and we have the lawful authority to instruct Parliament to do so.

And let us say to them that we the people of South Africa say no to these amendments.

Thank you and God bless you. 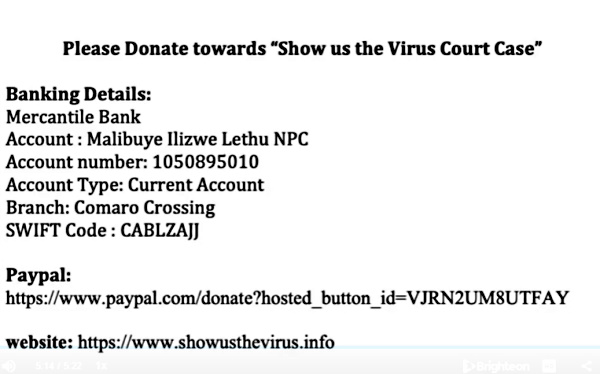 Ricardo Maarman: Update on South African ‘Show Us the Virus’ Court Case — “This Is Probably the Most Important Legal Battle…in the History of This Country.”

Ricardo Maarman holds a masters degree in International Politics  (MA). He took the South African government to court to produce proof of the isolation of Sars-CoV2, the virus said to be causing the condition, Covid-19. He is an ordinary person. Ordinary people need to stand up for the truth alongside him. Connect with Richardo Maarman at showusthevirus.info.