Scotland: Bill to Criminalize “Hate Speech”… in the …

Scotland: Bill to Criminalize “Hate Speech”… in the …

One of the perks about running a community-driven website such as this is not only the interesting articles that people send, but also the conversations with people sending them that occasionally occur. Today’s article, submitted (with my thanks) by D.O.B., brings to mind a conversation with an individual that I had some weeks ago. That individual is trans-gendered, which I mention because it is intriguing that the same individual is rather more on the traditional side of cultural-political issues than the progressive one. In recounting to me an encounter with a friend, the individual related a question posed to that friend, whom, we might additionally note, was of the “progressive” persuasion. And the question hovers over this story: “Just how much ‘progress’ is enough?” Indeed, it goes to the heart of the matter of today’s article, for one thing left conveniently “undescribed” or “undefined” is just that; and that’s the key to the progressivist method of achieving and maintaining power.

With that in mind, ponder the article shared by D.O.B.:

One wonders exactly how this would ever be enforced if, say,  an Orthodox Jewish family was trying to raise its children according to the tenets of its faith. Would the children have the power or ability under such a law to report the parents to the authorities for “hate speech” against Muslims or Christians or whomever? Merely being an Orthodox Jew teaching its precepts could certainly be construed as “hate speech” in today’s wacky culture and political context, and doutbless there are Christians and Muslims who would take it as such, but then balk if the same standards were applied to them. The same “standard,” let it be noted, could equally be applied to agnostic or atheist parents, who could be convicted of “hate speech” against “religion” or what have you. Again, per my friend’s question: “How much ‘progress’ is enough?” Or if I may put it rather differently, is the problem not really Orthodox Judaism or (to coin a term) “Orthodox Atheism” (or whatever), but progressivism itself?

Put in such terms, what we’re really looking at is, perhaps, just another “power grab” by busybodies that want to run everyone else’s lives and tell them how to live, how to think, what to read, and how to talk. With that in mind, consider the following screen capture from Twitter shared by M.D.:

These are not good people pic.twitter.com/OqvuiahCWb 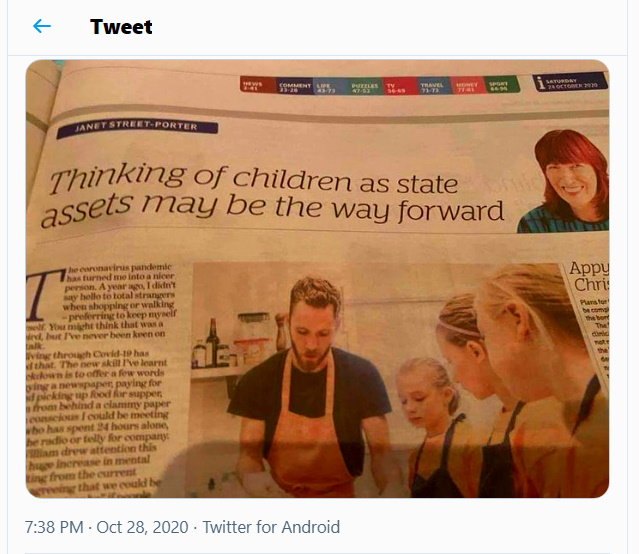 If children are “assets” of the state, and the state in turn is a collateralized asset of monetized-debt-creating central bankers, well then, there you are; it begins to make sense.  No, Mr. Globaloney, that Orthodox Rabbi, or that atheist father or mother or their children, are not state assets, not “human resources,” but families, made up of persons, who have inalienable natural God-given rights; whether or not one wishes to acknowledge God or not, the rights remain nonetheless.

So, Scotland, you’re on the wrong path here, and you’ll soon wake up to the question “How much ‘progress’ is enough?” because ultimately the end result of the course of action is to reduce everyone to mere assets of the state.

… oh, and by the way, similar legislation is being contemplated in Canada too.

I submit that the people pushing such “legislation” are the real ones pushing “hate speech,” because they hate the humanity of their neighbor, and the humanity represented by the most fundamental of all human institutions: the family.